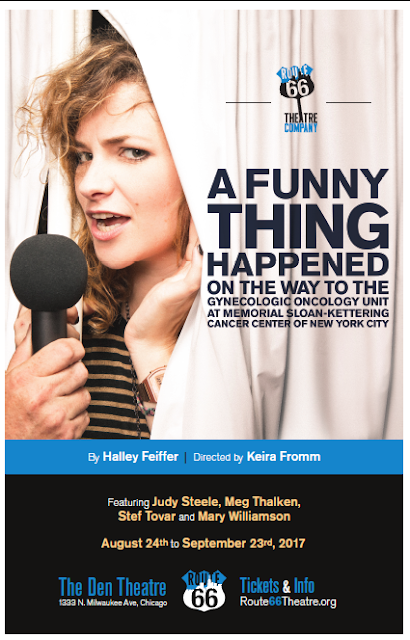 
Here at ChiIL Live Shows, we're looking forward to catching what's arguably the longest titled show currently running in the entire city of Chicago. This Sunday we'll be ChiILin' at Chi, IL's Den Theatre for Route 66 Theatre's Chicago premiere of the dark comedy we'll nickname "A Funny Thing". In case you're not familiar, The Den is a multilevel, multi theatre, multi bar marvel in Wicker Park that we adore. In case you DO know The Den and you're thinking of hiring a Sherpa for the narrow, steep, stair climb to the upper theatres, The Den's Bookspan space is only up a few steps and is more or less on the first floor. Check back soon for our full review.

Artistic Director Stef Tovar adds, “This play was a hit in New York last summer at MCC and the Geffen Playhouse in LA is producing it right after we open with Halley Feiffer playing the role of Karla... so for a theater company our size to secure the Chicago premiere is huge for us. We're so grateful to Halley for trusting us with her incredible script and this dynamite group of ladies are going to kill it. I can't wait to get started."

Creative Team Bios
Halley Feiffer (Playwright) is a writer and actress. Full-length plays include I’m Gonna Pray For You So Hard (Atlantic Theater Company, dir. Trip Cullman; OCC Nom. John Gassner Playwriting Award) A Funny Thing Happened On The Way to the Gynecologic Oncology Unit at Memorial Sloan Kettering Cancer Center of New York City (MCC Theater, dir. Trip Cullman) and How To Make Friends And Then Kill Them (Rattlestick Playwrights Theatre, dir. Kip Fagan). Her plays have been developed by Second Stage, New York Theatre Workshop, the O’Neill and elsewhere; they are published by Dramatists Play Service and Overlook Press. Her work has been commissioned by Playwrights Horizons, Williamstown Theater Festival and three times by Manhattan Theater Club. She teaches Playwriting at NYU.

Ms. Feiffer’s acting credits include the Broadway revival of The Front Page (dir. Jack O’Brien) and
The House of Blue Leaves (dir. David Cromer; Theater World Award), Tigers Be Still (Roundabout, dir. Sam Gold; Drama League Nom.), HBO’s Bored to Death and the films The Squid and the Whale, Margot at the Wedding (dir. Noah Baumbach) and He’s Way More Famous than You (dir. Michael Urie), which she also co-wrote. She currently writes for the upcoming Starz series The One Percent (co-created by Alejandro Iñárritu), the upcoming Showtime series Purity (based on the novel by Jonathan Franzen) and is developing two original television projects with Scott Rudin Productions.

Keira Fromm (Director) is a Jeff Award-nominated director, a casting director and a teacher based out of Chicago. Favorite recent directing credits include: the Chicago premiere of Bright Half Life (About Face) Theatre), the Chicago premiere of The Columnist (with American Blues Theatre); How the World Began (Rivendell Theatre Ensemble,) A Kid Like Jake (About Face Theatre,) Luce (Next Theatre,) Charles Ives Take Me Home (Strawdog,) The How and the Why (TimeLine Theatre,) Broadsword (Gift Theatre) and Fallow (Steep Theatre). Keira is an Artistic Associate with About Face Theatre. She received her MFA in Directing from The Theatre School at DePaul University and is a proud member of SDC. She is a frequent guest director at DePaul as well as the Chicago College of Performing Arts at Roosevelt University.

Posted by Bonnie Kenaz-Mara at 6:39 PM