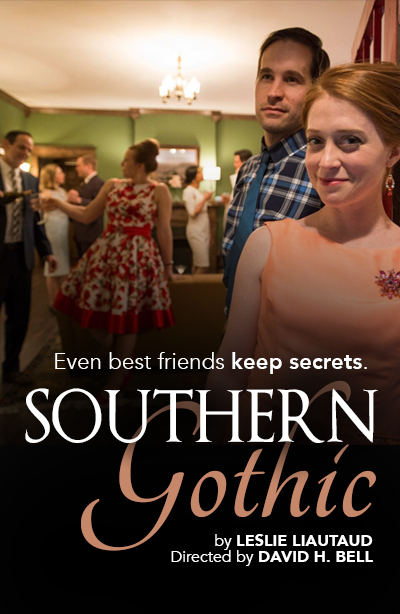 Windy City Playhouse is already on our short list for top favorite Chicago storefront theaters and we're beyond excited for their latest production. “Southern Gothic” is their first attempt at an immersive theatrical production and a world premiere too. Due to the small audience size, they're hosting press over a span of the first few weeks of the run, and we're slated to review “Southern Gothic” on February 28th. Back in the day, I was cast in a long  running series of immersive 1920's murder mysteries, so I have an affinity for the style, and can't wait to catch this!

Windy City Playhouse announces an expansion in programming with a world-premiere immersive theatrical production, “Southern Gothic,” premiering February 7, 2017 in an open-ended engagement. Written by Leslie Liautaud and directed by David H. Bell, “Southern Gothic” gives audiences the opportunity to be a “fly on the wall” at a cocktail party in Ashford, Georgia in the 1960s where four couples gather together to celebrate a birthday. As the evening progresses, tensions rise and longtime relationships are tested as they soon realize that even the best of friends keep the darkest of secrets. Due to the intimate nature of the show, audience size for each performance is limited to 25 patrons, giving audiences freedom roam every room of the home at will, exploring various spaces and eavesdropping on clandestine conversations, providing each audience member their own unique perspective on the evenings proceedings.

Unlike some immersive theater experiences, “Southern Gothic” is plot-driven, with each audience member experiencing various aspects of the party, yet still taking in the arc of the story line. The cast of “Southern Gothic” will not interact with the audience, leaving patrons free to watch the scenes happening around them like an invisible guest, traveling from room to room and sampling period-appropriate cocktails and canapes throughout the duration of the performance.

“Since the Playhouse’s debut in 2015, our goal has been to re-imagine the theater-going experience, always looking for ways to break down barriers between the audience and the performers. Immersive theater is something we’ve wanted to do for a long time, since it seems like such a natural extension of that mission,” noted Artistic Director and “Southern Gothic” Co-Creator Amy Rubenstein. “Immersive theater is just one way we are trying to deconstruct the formality of being at the theater, but it’s not our only tactic. Later in 2018 and beyond, you’ll see more of the plays you’ve come to know and love, always presented with the signature Playhouse twist.”

Following “Southern Gothic,” Windy City Playhouse transitions to a school-year aligned 2018-2019 season, which will run from September through June. The complete 2018 – 2019 season will be announced in the spring of 2018.

The performance schedule for “Southern Gothic” is as follows: Wednesdays and Thursdays at 7:30 p.m., Fridays at 8 p.m., Saturdays at 4 p.m. and 8 p.m., and Sundays at 2 p.m. and 6 p.m.  For a detailed performance schedule visit Windy City Playhouse’s Events Calendar. Capacity for each performance is limited; prices and showtimes are subject to change.

About the Artists in “Southern Gothic”
David H. Bell (Director) returns to Windy City Playhouse after directing last season’s Jeff Award-nominated “The Explorer’s Club.” He is a professor and Director of the Music Theatre Certificate program and Artistic Director of the American Music Theatre Project at Northwestern University. Bell has worked all over the world as a director, choreographer, and author. His work has received 44 Joseph Jefferson Award nominations, for which he has won 11; the Dramalogue Award (L.A.); the Helen Hayes Award (Washington, D.C.); five Carbonall Award nominations (Florida); a Laurence Olivier Award Nomination (London); seven Atlanta Journal and Constitution Awards; the Atlanta Circle of Dramatic Critics Award; and three National Endowment writing grants. He has served as Artistic Director for the historic Ford’s Theatre in Washington, D.C., and as Associate Artistic Director for Atlanta’s Tony Award-winning Alliance Theatre. He has had more than 40 new plays and musicals produced internationally, including the Laurence Olivier-nominated musical “Hot Mikado.” Recently, he collaborated with Northwestern University and the Royal Conservatoire of Scotland in presenting “Atlantic,” a pair of new musicals at the Edinburgh Festival last summer. He has collaborated on world premiere musicals with Craig Carnelia, Cy Coleman, Russell Baker, Jimmy Buffett, Herman Wouk, David Crane and Marta Kauffman, Bob Gaudio, Henry Marsh, Barry Mason, Jim Stafford, Eddie Seago, and Mike Leander, among many others. He directed and coauthored “Knute Rockne: All-American” at The Theatre at the Center. His adaptation of “The Boys From Syracuse,” for which he was nominated for three Jefferson Awards, played at the Drury Lane Oakbrook. He directed his musical “The Bowery Boys” at the Marriott Theatre in Lincolnshire and directed and choreographed “Once On This Island” at Marriott and “Hot Mikado” at Drury Lane. In summer 2011, Bell directed his own “Fanny Brice” musical at Florida’s Asolo Rep Theatre; wrote a program of musicals to accompany the AIDS Memorial Quilt to Washington D.C.; directed “Hamlet” at Notre Dame Shakespeare Festival and a World Premiere of “Hero” at the Marriott Theatre and Asolo Repertory Theatre; and wrote “The Rules of Love” in Istanbul with Turkish rock stars Sertab Erener and Demir Demirkan. Bell opened “Shakin’ the Rafter”s for Kenny Leon’s True Colors Theatre in Atlanta; directed “South Pacific,” “9 To 5,” “Cabaret,” and “On the Town” for the Marriott Lincolnshire; and directed “The Comedy of Errors,” “A Midsummer Night’s Dream” and “Pericles” for Chicago Shakespeare Theatre. For Northwestern University’s Wirtz Center for the Performing Arts, Bell has directed “A Midsummer Night’s Dream” and six Waa-Mu Shows: “Another Way West,” “Beyond Belief, What’s Next?,” “Off The Map,” “Flying Home” and “Gold.” He is currently writing and directing “The Museum of Broken Relationships” with composer Daniel Green.

Leslie Liautaud (Playwright) has worked for more than 30 years in professional theater as actor, director, choreographer and playwright. She is the author of “Midnight Waltzes” (2006), “He is Us” (2008), “The Wreck” (2009), “Saligia” (2011) and “A Midsummer Night’s Dream: The Millennial Edition” (2012). Her screenplays/webisodes include “Taj Mahal” (2006), “Web” (2010) and “Jimmy John’s/Whateverhollywood” (2010) parody web series. Liataud directed her one-act play, “The Mansion” (2010) and Tennessee William’s play “The Chalky White Substance” (2011) for the “Tennessee at 100” series in Champaign, IL. She wrote “Spectacle Lunatique” for Redmoon Theatre in Chicago in 2012. Liautaud’s plays have been produced throughout the Midwest and her plays “Midnight Waltzes” and “The Wreck” received translations for the Royal Academy of Fine Arts in Ghent where they are used as classroom curriculum and are archived at the Opendoek Library in Antwerp. She has performed and choreographed for various theatres and organizations such as Ibsen Theatre, Exposure Inc., Liberty Symphony Orchestra, Worlds of Fun and Westport Ballet Company. Liautaud co-founded the “People in Motion” high school youth performance program (1995) in Kansas City, MO. She is the author of the coming-of- age novel, “Black Bear Lake,” the psychological thriller, “Butterfly Pinned” and is currently writing her third novel.

Carl Menninger (Dramaturg and Co-Creator) has lived and worked in Chicago for many years and directed the 2016 production of “This” at Windy City Playhouse. Currently, he serves as an Artistic Associate to the Playhouse and is an Assistant Professor of Theatre at American University, in Washington, D.C., where he ran the Theatre and Musical Theatre programs for eight years. While in Chicago, Menninger worked with Victory Gardens and Chicago Dramatists. In addition to working at D.C.’s Studio Theatre and Adventure Theatre, his play “Everything But You: A Modern Romance” received a staged reading at the Keegan Theatre in D.C. His play “Dysfunction Spelled Backward Is Family” was also presented in D.C., and he is currently working on a play about the silent film stars Ramon Novarro and Billy Haines. Menninger is the author of “Minding the Edge: Strategies for a Fulfilling, Successful Career as an Actor.”

Amy Rubenstein (Co-Creator) is originally from Chicago and graduated from Brandeis University’s Department of Theater, Magna Cum Laude. Upon graduation, she worked as an actress in Chicago, Los Angeles, and regional markets, earning her Actors Equity Association membership at the Human Race Theater Company in Dayton, Ohio. She has been working in real estate for the past thirteen years specializing in development, adaptive reuse and financial and legal structuring of assets. Rubenstein was thrilled to have the opportunity to combine her business and artistic skills together to form Windy City Playhouse, which has produced ten shows in three seasons, six of which were Jeff Recommended. This fall, Rubenstein appears as Suzanna in “Becky Shaw.”

Paul Fagen (Jackson Wellington) makes his Windy City Playhouse debut. Chicago credits include “The Temperamentals” (About Face Theatre); “Feathers and Teeth” (u/s, Goodman Theatre); “Since, I Suppose” (Chicago Shakespeare Theater); “Fun Home” (u/s, Victory Gardens); “The Metal Children” (Next Theatre); “The Language Archive” (Piven Theatre Workshop); “Company” and “The Burnt Part Boys” (Griffin Theatre); “The Attempters” and “The Nutcracker” (The House Theatre of Chicago); “Late Company” (Cor Theatre); “Bright Room Called Day” and “The Crucible” (Speaking Ring Theater) and multiple performances at Quest Theatre Ensemble. Fagen has also been a proud member of Strawdog Theatre Company since his 2009 performance in “Red Noses.” Other Strawdog credits include “Quiz Show,” “Once In A Lifetime,” “The Good Soul of Szechuan,” “Petrified Forest,” “Big Love,” and “The Duchess of Malfi.” In 2008, Fagen received a CAAP grant from the Chicago Department of Cultural Affairs which he used to study in New York under Ruth Maleczech, founder of Mabou Mines. Film credits include the indie short “Making the Bed” and Stephen Cone’s “Princess Cyd.” Television credits include “Chicago Fire” (NBC).

Sarah Grant (Ellie Coutier) makes her Windy City Playhouse debut. Chicago credits include “The Upstairs Concierge” (Goodman Theatre, understudy): “A Very Merry Madrigal” (Theo Ubique); “Sleeping Beauty” and “Godspell” (Provision); “Hamlet is Dead: No Gravity” and “Hedda Gabbler” (Red Tape); and “Death and Harry Houdini” (House Theatre, understudy). Her regional credits include “The Dos and Don’ts of Time Travel” (Phoenix Theatre). She is an ensemble member at Red Tape Theatre and holds a master’s degree in the humanities from the University of Chicago.

Christine Mayland Perkins (Lauren Lyon) makes her Windy City Playhouse debut. She was most recently seen as the Scarecrow in “The Great and Terrible Wizard of Oz” at the House Theatre, where she is a company member. House Theatre credits include: “Revel,” “Rose and the Time,” “Ploughed Under,” “Nutcracker” (‘12 and ‘13), and “Kitty Hawk.” Other Chicago credits include “Psychonaut Librarians” (New Colony); “Titanic: The Musical” (Griffin Theatre); “Pirates of Penzance” and “Princess and the Pea” (Marriott Lincolnshire); “Mill Girls” (Etopia); and “Smokey Joe’s Cafe” (Open Door Rep, Light Opera Works, and American Music Theatre Projects). She is a graduate of Northwestern University. 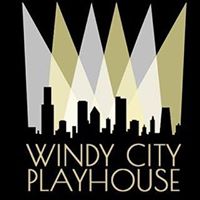 About Windy City Playhouse
Windy City Playhouse, Chicago's most sophisticated not-for- profit Equity theater, aims to expand beyond the traditional theatergoing experience by offering audience members a night of high-quality entertainment with a welcoming full-service bar in a lounge-like atmosphere with a fireplace and luxurious seating designed to foster pre and post-performance conversations.  Windy City Playhouse commits itself to audience-first programming and to presenting contemporary, diverse and humorous plays. Every aspect of the theater—the bar, décor and overall atmosphere—breaks down the formality and rigidity of the typical theater going experience. Lauded by audiences and critics alike, Windy City Playhouse promises to rock Chicago's theater scene.