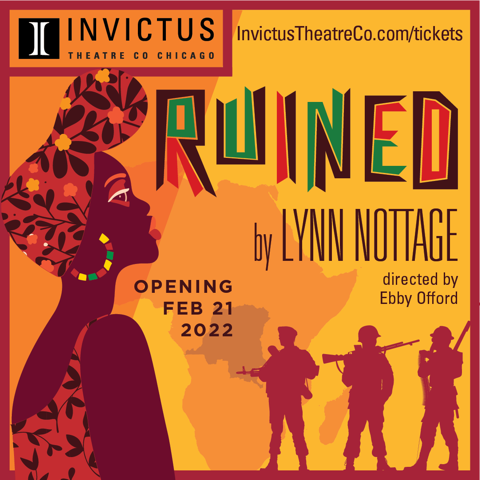 Invictus Theatre Company's production of Lynn Nottage’s Pulitzer Prize-winning RUINED, directed by Ebby Offord, will be performed in their new home venue – the Reginald Vaughn Theatre at 1106 W. Thorndale Avenue in Edgewater (the space formerly known as The Frontier) - from February 17 - March 20, 2022. Offord is a 2019 graduate of Washington University in St. Louis who has studied at Shakespeare’s Globe in London and appeared as Ophelia in Invictus’s fall 2021 production of HAMLET. I'll be out for the press opening February 21st, so check back soon for my full review.

RUINED, a drama originally commissioned by the Goodman Theatre, where it premiered in 2008, is a story of women caught in a civil war in the Democratic Republic of Congo. They find a refuge of sorts with Mama Nadi, a brothel owner who takes victims of sexual violence into her establishment. There, she profits from them but also protects them from the brutality of the world outside her doors. 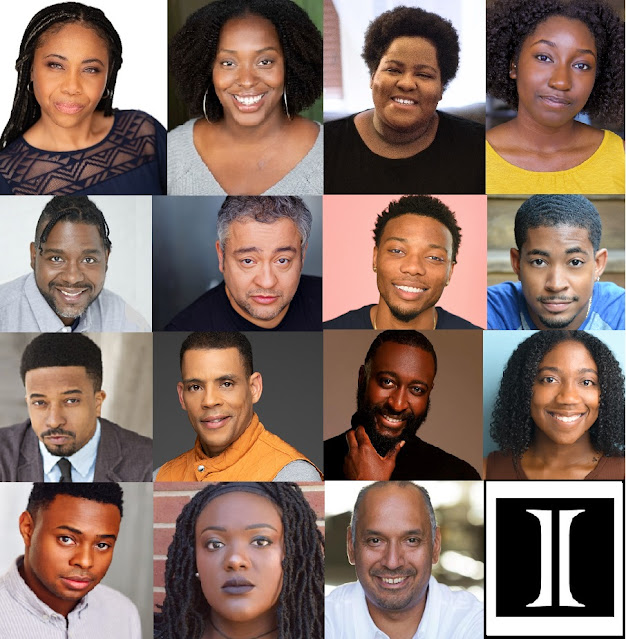 Offord says RUINED is “a reminder that the decades of violent turmoil in the Congo and other regions of Sub-Saharan Africa have anything but subsided. War is still being waged on women's bodies. Black women especially. Therefore, their stories must continue to be told.”

VARIETY said RUINED “takes us inside an unthinkable reality and into the heads of victims and perpetrators to create a full-immersion drama of shocking complexity and moral ambiguity.” The CHICAGO TRIBUNE praised it as “Sincere, passionate, courageous and acutely argued… a remarkable theatrical accomplishment…In the hands of this talented playwright, what might have been a predictable political polemic instead emerges as a richly stirring and complex drama that even includes generous doses of humor.”

Invictus Theatre Company has, over its five-year history, built a reputation for intimate and honest interpretations of classics with fidelity to the original texts and close attention to character development. The CHICAGO READER’s Albert Williams said the company’s HAMLET was “stellar…storefront Shakespeare at its best.” The READER’s Kerry Reid praised the “fearless and layered performances” of the company’s live stream production of “NIGHT, MOTHER in 2020. Of their 2019 A RAISIN IN THE SUN, Reid said “(director Aaron) Boseman’s production goes for broke with heartfelt zest, spilling over the edge of Kevin Rolfs’s appropriately tiny dingy set.” Nancy Bishop of the THIRD COAST REVIEW said of Invictus’s 2018 MERCHANT OF VENICE that “Charles Askenaizer’s direction results in a smoothly performed production of what is considered one of Shakespeare’s problem plays—and it may make you squirm in your seat as you’re sitting very close to the action.”

Tickets for RUINED are available now at www.invictustheatreco.com/tickets. RUINED will also participate and offer tickets as part of Chicago Theatre Week, a celebration of Chicago’s world-class theatre scene now in its 10th year that will run from February 17-27, 2022.

All actors have been vaccinated. All audience members are required to show proof of vaccination at the door and to wear masks throughout the performance.

This winner of the 2009 Pulitzer Prize is set in a small mining town in the Democratic Republic of Congo., RUINED follows Mama Nadi, a shrewd businesswoman in a land torn apart by civil war. But is she protecting or profiting by the women she shelters? How far will she go to survive? Can a price be placed on a human life?

Ebby Offord (Director) is a Chicago-based actor, director, and teaching artist. She graduated from Washington University in St. Louis with a degree in Drama in 2019 (Favorite credits include AUNT DAN AND LEMON, PASSING STRANGE, and AUGUST: OSAGE COUNTY.) After graduating, Ebby returned to Chicago to teach with the Institute of Reading Development. She now dedicates her time to pursuing art full-time and working as a caretaker for her father. Ebby appeared in Invictus’s HAMLET as Ophelia last fall, and she’s excited to make her professional directing debut with Invictus on RUINED.

At Invictus Theatre Company our mission is to create theatre that promotes a better understanding of language: its poetry, its rhythm, its resonance; through diverse works by diverse artists. We respect the power of heightened language: spoken, written, sung; to express the breadth of the human condition. We work to harness the power of language: to promote diversity, to engender respect, to foster collaboration; and to empower our communities to share their voices.

Invictus Theatre Company incorporated in January 2017 and received its 501 (c)(3) nonprofit status in February 2017. A diverse group of Chicago actors and directors founded Invictus with the vision to empower their communities through theatrical productions of heightened language. We are committed to the idea that our productions should reflect the communities we represent, and, to that end, we are committed to non-discriminatory hiring practices. In working with local artists, designers, and production teams, Invictus Theatre Company does not discriminate on the basis of race, sex, sexual orientation, gender identity, ability, nationality, citizenship, religion, or any other protected status by law.

Invictus Theatre Company is supported by the MacArthur Funds for Arts and Culture at the Richard H. Driehaus Foundation, the Paul M. Angell Family Foundation, and the Illinois Arts Council Agency.