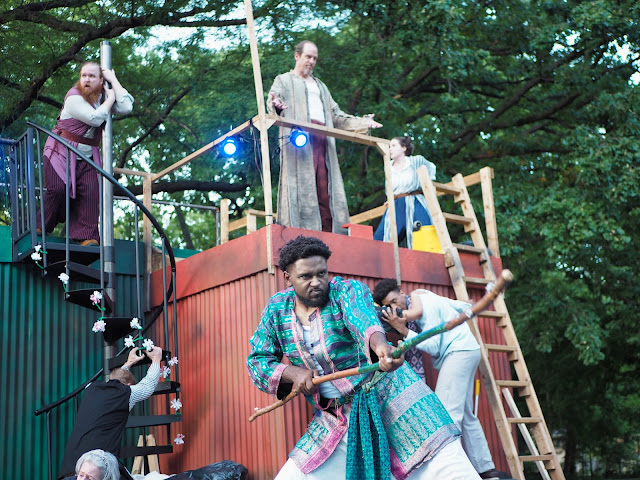 Act I, Scene I from OPFT's The Tempest. All Production Photos by Bryan Wakefield

Last night my son and I made the short drive from Chicago to Oak Park, to catch The Tempest. It took under a half an hour to reach this urban/suburban village, just west of the city limits, but it was like entering another world. Street parking was fairly easy to find, sidewalks were trash-free, and Austin Gardens park was lush and lovely.

As the stage lights rose and the sun set, it was glorious to be back in an audience again. Groups of friends broke out wine, beer, fruit and cheese, and even set up actual low tables, like a mini-Ravinia. Though drinking is usually verboten in OP parks, adult beverages are fine an hour before and after Oak Park Festival Theatre shows. There are close bathrooms on site and the grounds open a half hour before curtain so audience members can stake out a spot. Chairs are available to rent for $5 or patrons can bring their own blankets or seating. Overall, it was a fun, well run theatrical experience in a gorgeous location, and we're eager to return for future shows.

Early on, the chorus of cicadas nearly drowned out the dialogue, but as the darkness deepened, they subsided to a low hum and swooping bats contributed an arial ballet to the ambiance. The Tempest begins with a raging sea storm, then enters into a lot of convoluted exposition, prompting more than a few audience members to pull up the virtual program's plot summary during the 15 minute intermission. Hang in there. After a slow build, the second act is stronger and quite funny. Also, if you're new to The Tempest or easily confused, read the synopsis before the show. 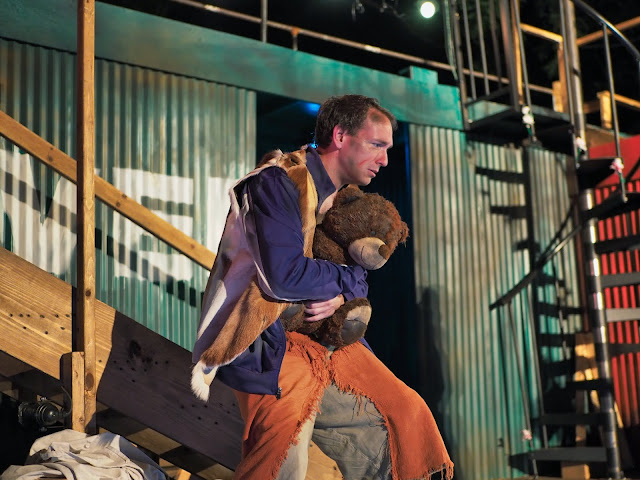 After the show we spoke with Chloe Bassett, member of the Oak Park Festival Theatre Summer Intern Cohort, who is also on cast with my son at Bristol Renaissance Faire. She's wearing many hats, since the OPFT interns build the set, understudy characters (Trinculo in her case), and help crew the productions. We were particularly impressed when she told us, in life imitating art fashion, that they were initially constructing the ship set during the tornado warnings earlier this month, before The Tempest build got called for the dicey weather. Now that's dedication to craft! 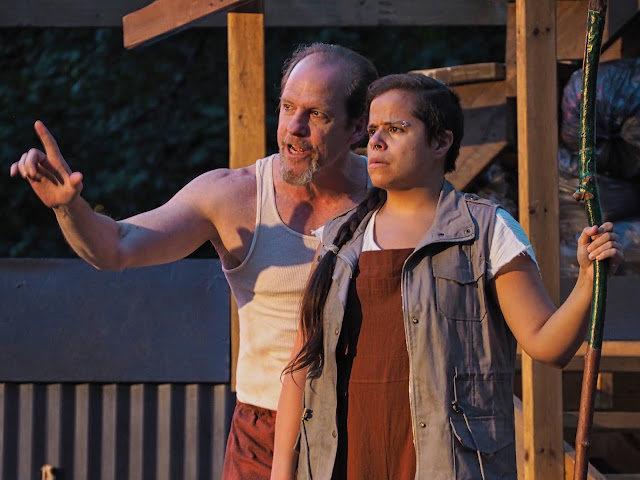 If you're covid cautious, high risk, or uneasily easing back into post quarantine crowds, do note that masks were rare and chairs much closer than six feet apart. That said, it is an outdoor event and we felt at ease, even though our beach chair pod of two was definitely not an island in a six foot sea. This fest has been staging professional Shakespeare shows since 1975, so we're thrilled a little thing like a global pandemic hasn't sunk this ship or dampened their spirits. In fact, this scrappy band of castaways on a trash island, are some of the first in the region to get back on stage. Have you been missing your live theatre fix for the past sixteen months? Don't miss this. 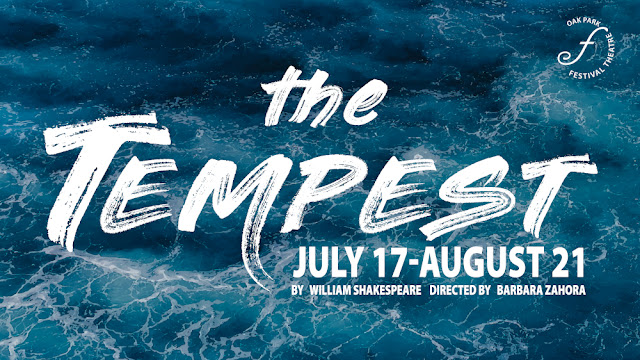 **Magical creatures abound on a spectacular stage set providing entertainment for the whole family to enjoy, and children 12 and under are Free. ** 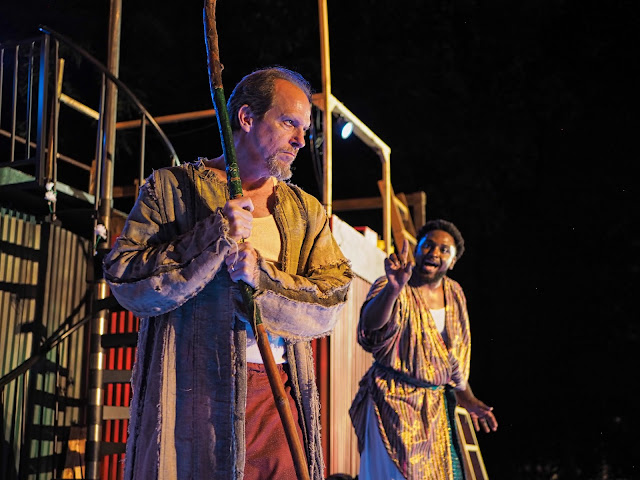 What do hurricanes, magic, mayhem, love, revenge, and monsters all have in common? They're facets of “The Tempest’s” fast-moving plot which leaves audiences breathless and cheering for more of its wry comedy. The play also explores nuanced concepts of colonialism, power struggles, and redemption.

As one of the few Chicago-area outdoor theatrical companies, OPFT and the cast and crew of “The Tempest” are thrilled to return to in-person performances. The organization has been working for more than a year to visualize and create a spectacular event for summer 2021 that also provides safety for all its participants.

Artistic Director Barbara Zahora says, “Even though we chose this play long before coronavirus and the murder of George Floyd changed our world so significantly, its themes of exile, injustice, the struggle for power, self-discovery and healing are all particularly resonant after the last year. As people start to come out of their homes and find a new normal post-pandemic, we hope this will be particularly meaningful for those seeing it for the first time.” 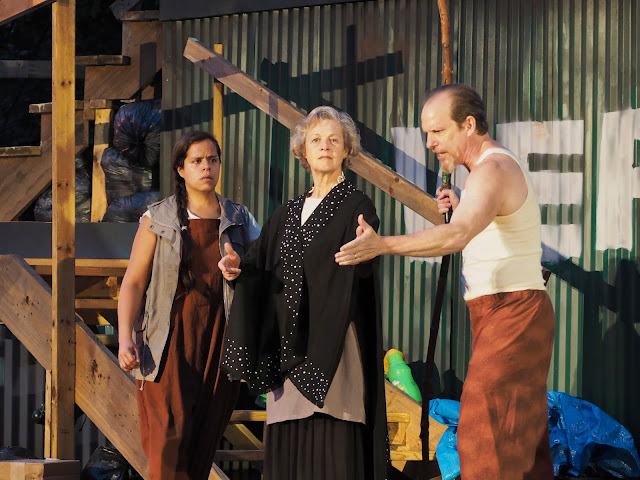 Zahora (director/Oak Park Festival Theatre Artistic Director) joined the OPFT staff as interim artistic director in 2018, and at the beginning of 2019 became the permanent artistic director for the company.  Barbara directed OPFT’s 2019’s “Elizabeth Rex” as well as their acclaimed 2017 production of “Macbeth.” Other Chicago directing credits include “Hollow/Wave” (Silk Road Rising); “Shrewish” (Artemisia Theatre); “Candida,” “Hay Fever,” “Misalliance” and “Private Lives” (ShawChicago); and several productions with The Shakespeare Project of Chicago, where she served as associate artistic director for eight years. Her favorite acting credits at OPFT include Penny in “You Can’t Take It With You” and Maggie in “Dancing at Lughnasa.” Additional acting credits include American Players Theatre, Writers’ Theatre, Chicago Shakespeare Theater,Goodman Theatre, Northlight Theatre, Lookingglass Theatre, and Shakespeare Project of Chicago. TV and film credits include “Chicago Fire” and “Operator.” Zahora is currently the co-head of Acting at Roosevelt University’s Chicago College for the Performing Arts (CCPA). 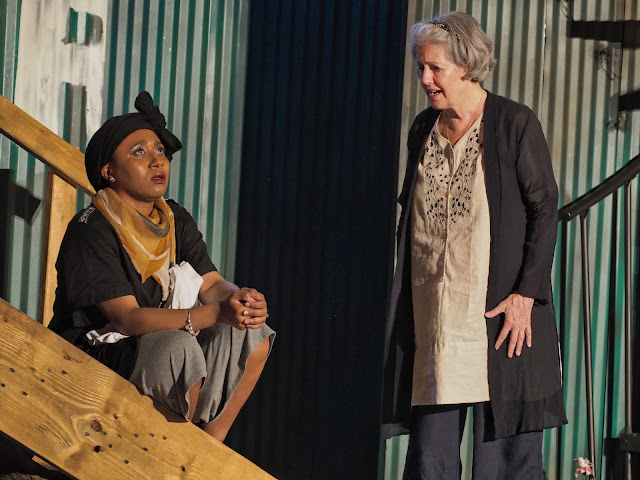 The real story starts after the storm ends

Prospero, the rightful Duke of Milan, was exiled from his dukedom 12 years earlier as part of a power struggle with Prospero’s sister, Antonia. Now hungry for revenge, Prospero creates a storm with his sorcery to shipwreck his enemies and bring those who have wronged him to bear.

Will those that committed injustice be held to account? Grace, forgiveness, and love ultimately provide redemption in this funny and touching tale.

Prospero, hungry for revenge, conjures a storm to torment his malevolent sister, Antonia. Prospero uses this moment to tell Miranda, his daughter, that Antonia deposed him from dukedom over a decade ago. With the assistance of Gonzalo, Prospero had set out to sea on a boat with Miranda. They landed on a magical land where he enslaved Caliban, the only native islander. He then saved a spirit named Ariel from imprisonment.

The storm that he casts forces all crew members to land on the magical island. King of Naples’ son, Ferdinand, who was presumed dead, landed in a different part of the island. He finds Miranda and instantly falls in love. Meanwhile, Caliban, Trinculo, and Stephano attempt to murder Prospero. All while, Antonia manipulates Sebastian to kill his brother, Alonsa – King of Naples.

Oak Park Festival Theatre presents William Shakespeare’s “The Tempest” through Aug. 21 at Austin Gardens, 167 Forest Ave, Oak Park, Ill. All performances begin at 8 p.m. except Sundays, which begin at 7 p.m. Seating begins one hour prior to showtime. Patrons can bring their own seating/blankets, and lawn chairs are available to rent for $5.

Tickets are $35 (Seniors: $25; Students $15; Children 12 and under Free). Seating is general admission. Tickets are on sale now. For tickets or more information visit oakparkfestival.com.

Covid guidelines will be updated with guidance from the CDC, the Village of Oak Park, and the Actors’ Equity Association. Street and garage parking is available adjacent to the park on Forest Ave and Marion St. In the event of inclement weather, OPFT has partnered with shelter areas surrounding Austin Gardens. For more information visit oakparkfestival.com.

Oak Park Festival Theatre is Oak Park’s premiere Equity theater, and the oldest professional outdoor classical theatre in the Midwest. Since 1975, Oak Park Festival Theatre has produced more than 100 plays for thousands of theater-lovers, and is best known for summer outdoor shows performed under a canopy of stars in the idyllic Austin Gardens park. It is the mission of OPFT to explore our shared humanity by telling stories that stand the test of time. By looking to our past and re-imagining the familiar, OPFT endeavors to hold a mirror up to the times in which we live, bringing us all a little closer.

Oak Park Festival Theatre is a 501(c) 3 nonprofit, charitable organization. Donations are tax deductible to the full extent of the law.

Oak Park Festival Theatre is supported by the Gaylord & Dorothy Donnelley Foundation, the Paul M. Angell Family Foundation, the Park District of Oak Park, The Oak Park Area Arts Council, and many generous donors. Additionally, we are partially supported by a grant from the Illinois Arts Council, a state agency and the National Endowment for the Arts. Special thanks to our local partners the Wednesday Journal, the Oak Park-River Forest Community Foundation, and the Oak Park River Forest Chamber of Commerce.

Posted by Bonnie Kenaz-Mara at 7:11 PM No comments: