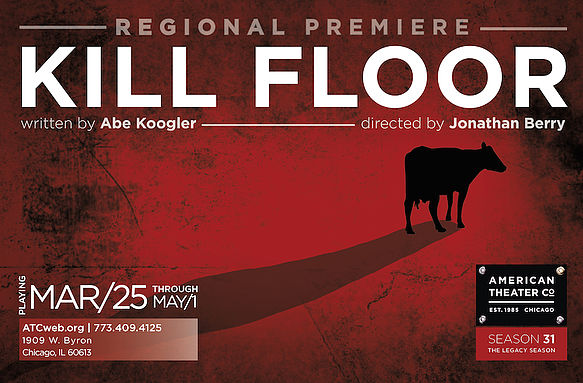 Kill Floor takes place in a small town in 2003. Following a long incarceration, a mother returns to her hometown to restart her life. After securing a job at the local slaughterhouse, the challenges of re-entry unfold as she reunites with her teenage son, a staunch vegetarian. Koogler’s thought provoking, surprising and moving search for connection in modern America had its World Premiere at New York’s LCT3/Lincoln Center Theater in October 2015.

Said newly named ATC Artistic Director Will Davis: “I'm thrilled to be joining ATC as the company begins work on Abe Koogler's Kill Floor. I had the pleasure of listening to this play develop in Austin where Abe and I were both in grad school.  Even then it was clear to me that Abe was in the midst of writing a deeply moving and difficult new play that beautifully illustrates what it feels like to never have enough. Kill Floor takes a close up look at what it means to be the working poor in our country and this lens puts the piece in deep conversation with ATC’s mission question: What does it mean to be an American?”

Posted by Bonnie Kenaz-Mara at 1:16 PM No comments: