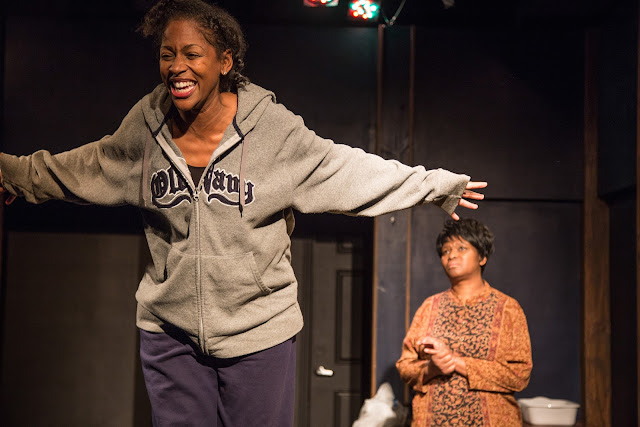 Haven is pleased to host In Conversation with Sonia Sanchez, a free post-show discussion with the esteemed writer, poet and activist. Sanchez’s play 2 x 2 is featured as part of DIRECTORS HAVEN, the company’s ever-growing initiative annually showcasing the talents of three rising directors. Hosted by Artistic Director Ian Damont Martin and the play’s director, Aaron Mays, the conversation about Professor Sanchez’s work, her life and the interplay between arts and activism will be held on Sunday, October 27 at 6 pm (following the 3 pm performance) at The Den Theatre, 1331 N. Milwaukee Ave. in Chicago’s Wicker Park neighborhood. Advance reservations are recommended by visiting Eventbrite. 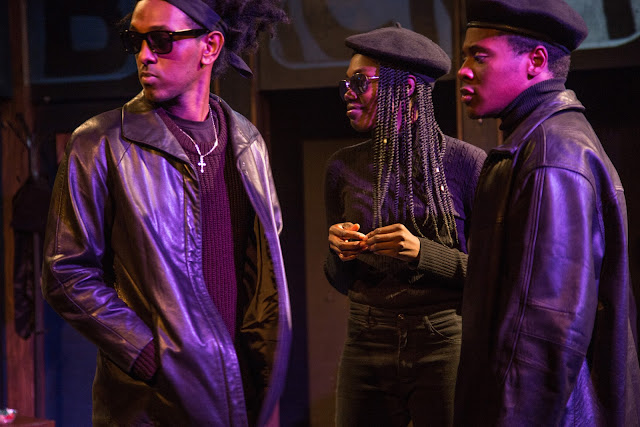 In addition to Sonia Sanchez’s lyrical drama 2 x 2, this year’s DIRECTORS HAVEN also features Caryl Churchill’s ambitious surrealist work THIS IS A CHAIR directed by Lauren Katz and Dan Giles’ tender yet challenging one-act HOW YOU KISS ME IS NOT HOW I LIKE TO BE KISSED directed by AJ Schwartz. The three productions, which will have the support of a full production team, run back-to-back in one program through October 30, 2019 at The Den Theatre. Tickets ($10 suggested donation) are available at havenchi.org. 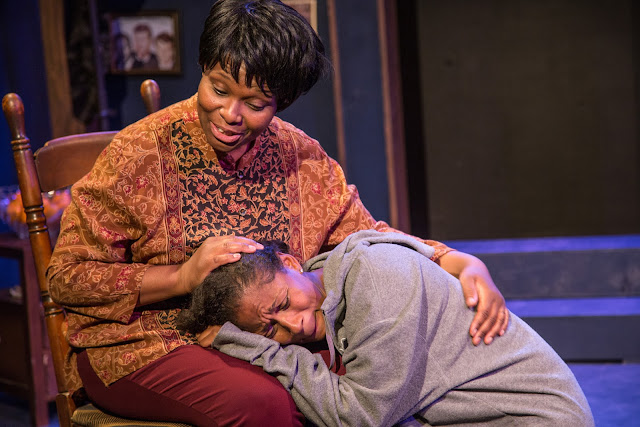 About Sonia Sanchez
Poet. Mother. Professor. National and International lecturer on Black Culture and Literature, Women’s Liberation, Peace and Racial Justice. Sponsor of Women’s International League for Peace and Freedom. Board Member of MADRE. Sonia Sanchez is the author of over 16 books including Homecoming, We a BaddDDD People, Love Poems, I’ve Been a Woman, A Sound Investment and Other Stories, Homegirls and Handgrenades, Under a Soprano Sky, Wounded in the House of a Friend (Beacon Press, 1995), Does Your House Have Lions? (Beacon Press, 1997), Like the Singing Coming off the Drums (Beacon Press, 1998), Shake Loose My Skin( Beacon Press, 1999), and most recently, Morning Haiku( Beacon Press, 2010). In addition to being a contributing editor to Black Scholar and The Journal of African Studies, she has edited an anthology, We Be Word Sorcerers: 25 Stories by Black Americans. BMA: The Sonia Sanchez Literary Review is the first African American Journal that discusses the work of Sonia Sanchez and the Black Arts Movement. A recipient of a National Endowment for the Arts, the Lucretia Mott Award for 1984, the Outstanding Arts Award from the Pennsylvania Coalition of 100 Black Women, the Community Service Award from the National Black Caucus of State Legislators, she is a winner of the 1985 American Book Award for Homegirls and Handgrenades, the Governor’s Award for Excellence in the Humanities for 1988, the Peace and Freedom Award from Women International League for Peace and Freedom (W.I.L.P.F.) for 1989, a PEW Fellowship in the Arts for 1992-1993 and the recipient of Langston Hughes Poetry Award for 1999. Does Your House Have Lions? was a finalist for the National Book Critics Circle Award. She is the Poetry Society of America’s 2001 Robert Frost Medalist and a Ford Freedom Scholar from the Charles H. Wright Museum of African American History. Her poetry also appeared in the movie Love Jones. Sonia Sanchez has lectured at over 500 universities and colleges in the United States and has traveled extensively, reading her poetry in Africa, Cuba, England, the Caribbean, Australia, Europe, Nicaragua, the People’s Republic of China, Norway, and Canada. She was the first Presidential Fellow at Temple University and she held the Laura Carnell Chair in English at Temple University. She is the recipient of the Harper Lee Award, 2004, Alabama Distinguished Writer, and the National Visionary Leadership Award for 2006. She is the recipient of the 2005 Leeway Foundation Transformational Award. Currently, Sonia Sanchez is one of 20 African American women featured in “Freedom Sisters,” an interactive exhibition created by the Cincinnati Museum Center and Smithsonian Institution traveling exhibition and she was the recipient of the Robert Creeley award in March of 2009.

This is a Chair is composed of a series of individual vignettes, each including a headline that is meant to be clearly displayed or stated. Each title refers to a contemporary world issue, including “The War in Bosnia,” “Genetic Engineering,” and “Pornography and Censorship” – titles that seemingly share no connection to the scene at hand. Caryl Churchill invites us to dig deep into our personal lives and relationships, exploring the depths of how we interact with the world around us.

Beverly Smith is watching her family fall apart. Her grandchildren are in need of her care while her daughter Ramona, once a fierce activist, struggles with addiction. When Beverly goes to take the kids home with her, she learns about Ramona’s past passion for activism and what led to her decline. This lyrical drama set in North Philadelphia explores social activism, generational differences and the hardships facing urban black communities through the lens of a mother-daughter relationship.

HOW YOU KISS ME IS NOT HOW I LIKE TO BE KISSED
By Dan Giles
Directed by AJ Schwartz
Mentor: Monty Cole
Featuring Morgan Lavenstein and Rolando Serrano

It’s a love story that transcends labels. Two people meet, they fall in love, they U-Haul, life happens. A couple just like any other – well, almost. How You Kiss Me Is Not How I Like To Be Kissed innovatively addresses the urgent contemporary issue of straight representation in the arts. This groundbreaking and oh-so-needed play brings important visibility to the sorrows and joys – and even the inherent flaws – of the heterosexual lifestyle.

Comments Artistic Director Ian Damont Martin, “This cohort of directors is more than ready to bring their work to the Chicago community, and Haven couldn't be more excited to facilitate and support them in this fifth year of our Directors Haven program. Each of these early-career directors have interests and visions that are specific, intelligent and downright exciting. The pieces they have individually selected are glimpses of the kind of work we need to be seeing and making right now – work that asks us the difficult questions – work that makes space for the marginal and the marginalized. This is met with an articulated interest and commitment in intentional processes, which is becoming increasingly important at Haven. We are very much looking forward to bringing you this necessary work from the next generation of artists helping to find and define the future of our practice.”

About the Directors
Lauren Katz (This is a Chair) is a freelance director, dramaturg, and teaching artist. She served as the 2016-17 Artistic Apprentice at Steppenwolf Theatre Company, and as a fellow in the 2018-19 Directors Inclusion Initiative at Victory Gardens. Recent directing projects include: Subjective is Beauty (Prop Thtr), Toni and Marcus: From Village Life to Urban Stress (Illinois Holocaust Museum) and Salena’s Story (iO Theater). As an assistant director and dramaturg in Chicago, Lauren has worked with various companies including About Face Theatre, Firebrand Theatre, Theater Wit, Steppenwolf Theatre Company, Writers Theatre and Windy City Playhouse. As a teaching artist, Lauren works with Lookingglass Theatre and Mudlark Theatre.

Aaron Mays (2 x 2) is an emerging director and playwright in Chicago with a passion for stories of the African diaspora and the narratives of marginalized voices. Aaron’s most recent directing credits include Waiting for Godot (Tympanic Theatre) with an all-Latinx cast and Tug of War (CIRCA Pintig), a series of short plays on war, trauma and immigration. In addition, he has worked with Chicago’s top directors, serving as the assistant director for such productions as Sweat (Goodman Theatre), Mosque Alert (Silk Road Rising), Two Trains Running (Goodman Theatre) and Seven Guitars (Court Theatre).

AJ Schwartz (How You Kissed Me is Not How I Like to be Kissed) is a director living and making art in Chicago since 2013. As a theatremaker, they aim to use performance to explore the world through a radical, iconoclastic and undeniably queer lens. Their recent credits include Mike Pence Sex Dream, Refrigerator (assistant director, First Floor Theater), This Bitter Earth (dramaturg), Time Is on Our Side (assistant director, About Face Theatre), Zurich (assistant director, Steep Theatre Co.), and The Henry V Project (director, Loyola University Chicago).

We exist to be a Haven for The Future. We achieve this through championing the next generation of playwrights, directors and actors by producing and promoting plays and performances that are staking their claim as the immediate future of this art form, and by investing in those at the very beginning of their professional journeys. Through this inspiration, we seek to ignite in each audience member a hope for the Future - the Future of theatre and performance, the Future of each other, the Future of our community.
Posted by Bonnie Kenaz-Mara at 4:11 PM No comments: