OPENING: My Name is Rachel Corrie Via Jacaranda Collective at The Den Theatre in Chicago 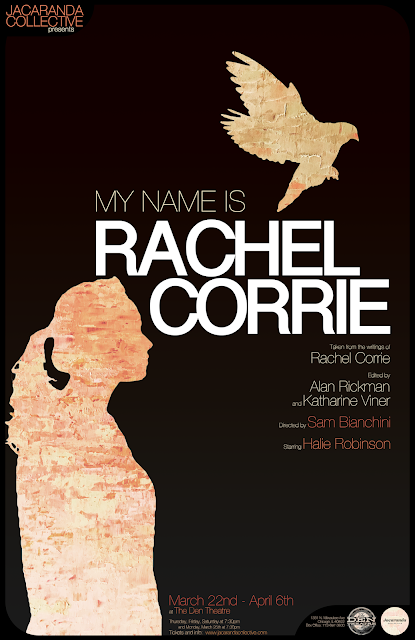 The Den Theatre, Chicago: Jacaranda Collective is thrilled to be bringing the words of Rachel Corrie to Chicago in their production of My Name is Rachel Corrie.

“And what would I write about if I only stayed within the doll’s house, the flower-world I grew up in?”

When a young writer’s growing knowledge of world events leads her to nonviolent activism and human rights observation in the Gaza strip, she witnesses first hand the personal experiences of the people behind the news headlines.

Taken from the intense and the poetic journals, adapted by Alan Rickman and Katharine Viner, My Name is Rachel Corrie boldly poses the question: what do we owe the rest of humanity?  The show opens on March 22nd and will run Thursdays, Fridays, and Saturdays through April 6th, with one performance on Monday the 25th. All at 7:30 pm. Tickets are $25 general admission, $15 student/senior, and available at the door or at The Den Theatre.

On March 16, 2003, Rachel Corrie was crushed to death by a bulldozer at the age of twenty-three, while she was working to prevent the demolition of a Palestinian home. My Name is Rachel Corrie is a one-woman show taken directly from Rachel’s writings that paints the portrait of a messy, skinny, articulate, Salvador Dali-loving chain-smoker (with a passion for the music of Pat Benatar), who left home and school in Olympia, Washington, to join hundreds of others in non-violent activism in the tumultuous Gaza Strip.

Artistic Director, Sam Bianchini, has taken on the role of Director. Bianchini has been working as an actress/director/producer/writer in both Film and Theatre around LA, NYC, and Chicago for the past 14 years. Rachel Corrie will be her Chicago debut as a director. She said of the show, “In this extremely polarized time where news is often confined to headlines and sensationalized stories are shared at an alarming rate, Rachel’s story is not only timely but absolutely critical. She asks us to look at the humans behind the headlines, their families, their hopes, their dreams, and implores us to see the consequences of our actions. Her haunting and brilliant words drip with vulnerability, humor, and an urgency that I believe is imperative in this paramount moment in the history of our world.”

Rachel Corrie’s writings have been translated into Arabic, Hebrew, French, Italian and Spanish and are recognized as a powerfully honest insight, not only into one of the most complicated international political conflicts but also into human nature.

What: Jacaranda Collective is thrilled to bring the powerful and haunting words of Rachel Corrie to Chicago in their production of My Name is Rachel Corrie. The show is composed of Rachel’s own journals, letters, and emails. It details her life as she leaves her home in Olympia, Washington to work as a non-violent activist in the heart of the Israeli-Palestinian conflict. The show opens on March 22nd and will run Thursdays, Fridays, and Saturdays through April 6th, with one show on Monday, March 25th. All at 7:30 pm. Tickets are $25 and available at the door or at The Den Theatre.

Where: The Den Theatre, Chicago

Tickets: Tickets are $25 and may be purchased at the door or at The Den Theatre. Discounts available for students.

Posted by Bonnie Kenaz-Mara at 5:04 PM No comments: