REVIEW: Get Out Alive Via Haven Now Playing at Den Theater Through August 6, 2022

at The Den Theater 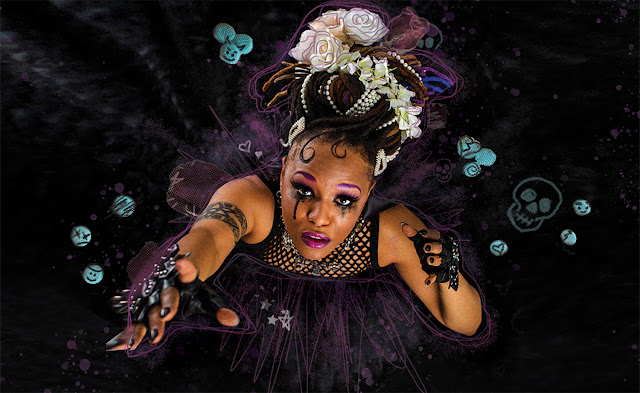 One in five adults experiences mental illness, according to the National Alliance on Mental Illness. But it’s one in a million who can take their extremely personal experiences with depression and turn it into a kick-ass musical.

Which is exactly what singer-songwriter-activist NIkki Lynette has done with her autobiographical show “Get Out Alive” currently playing at The Den. Lynette speaks openly about her strained relationship with her mother; they adored each other, but Mom was so worried about her daughter following in her footsteps of bad choices that she smacks Lynette during an argument about boys…which, devastatingly, sets the precedent that people we love can hurt us. And leads Lynette down the very path her mother was trying to persuade her to avoid.

Lynette shares and sings of trauma and loss. Of losing her beloved mother to cancer. Of not showering for a week, leading her best friend to tell her,”You smell how you feel.” Of being in the psych ward after a suicide attempt. She says she met others in the hospital who felt as alone as she did, so she promised to tell their story.

The show includes video interviews with people talking about their mental health struggles. I really liked these segments because they were raw and honest, but also easy to follow. Some of the songs, while exhibiting Lynette’s powerful voice, were difficult to understand the lyrics. That was disappointing when her message is so important. Although, she did have a very funny song where Lynette relays her family suspects she is trying to steal her deceased mother’s fur coats. “Did I mention I’ve been a vegan for twenty years?” Which segues into the song,”Vegans Don’t Wear Fur!”

The show’s set is designed like a runway at a fashion show. Anna Wooden’s costume design is goth and hip. The giant “paper doll” gowns were especially inspired.

Two backup dancers accompany Lynette, and they are fantastic. Jacinda Ratcliffe as Echo #1 and Keeley Morris as Echo #2 are wonderful additions to the show. Their dancing was incredible. (Their energy made me feel 100 years old.)

“Get Out Alive” has perfect timing with the introduction of a new national suicide hotline number, 988, being introduced. It’s 24/7 and an excellent resource if the caller is concerned for a friend or family member as well. It’s time as a society that we talk about mental illness which used to be shrouded in secrecy and shame.

There is a giant tarp in the lobby of the theater where audience members can write what they do to stay happy, healthy, and alive. Someone had written to “stay away from negative people.” Mine was: “lots of theater & music!”

A floral display in the theater resembles the shrines that are hurriedly thrown together after a disaster or yet another tragic shooting. It symbolizes that Nikki Lynette could have needed a funeral, but she had the courage and resolve to live.

Catherine Hellmann teaches at a therapeutic day school with teens who struggle with mental illness. Being a kid these days is hard enough. She urges everyone to be kind and take their meds. 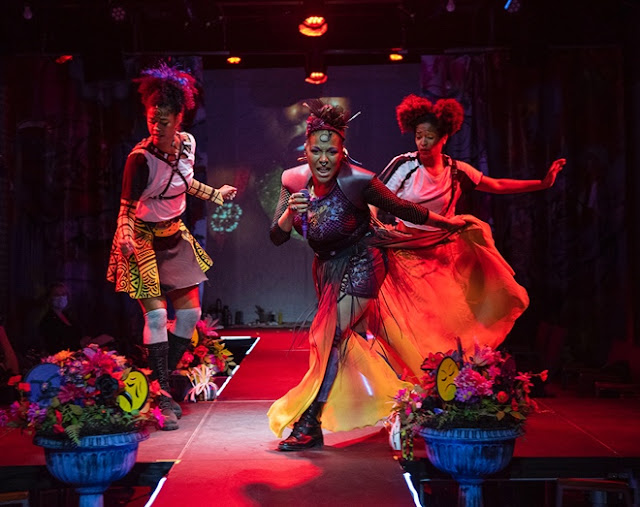 COVID guidelines: In the interest of keeping patrons and staff safe, and in accordance with the League of Chicago Theatres, The Den Theatre will continue to require proof of vaccination to attend any event for the indefinite future. While masking is no longer required, The Den strongly encourages patrons to continue wearing a mask when not eating or drinking. For the most current information on The Den’s COVID guidelines, visit thedentheatre.com/covid19-policy.

About the Artists
Nikki Lynette (Book, Music, Lyrics, Performer, she/her) is a social impact artist and mental health activist. Her music is featured in popular shows on Netflix, Hulu, Showtime and more. Since going public about her suicide recovery in 2016, Nikki's outreach grew from a mental health video series for AFROPUNK to giving a TEDx Talk hosted by Princeton University. With her play Get Out Alive, Nikki made history as the first black female playwright to be produced by American Music Theatre Project and the first AMTP work to debut at Steppenwolf Theatre Company. She was recently honored with an Ambassador of the Year Award by NAMI, the largest grassroots mental health organization in America.
Roger Ellis (Co-Director, they/them) is a director-producer of tech-forward experimental performance projects. Ellis’ work explores identity, post-traumatic growth and the relationship between digital technology and the human body. Recent projects include the film adaptation of Nikki Lynette’s afrogoth musical Get Out Alive, and [re: CLICK], an app-based performance devised in response to Click by Jacqueline Goldfinger. Ellis’ choreography for AntigoneNOW was featured in the 27th Cairo International Festival for Experimental Theatre. Ellis’ work has been produced in Atlanta, NYC, Chicago and Southern California. Ellis is an Assistant Professor in the Department of Theatre at Northwestern University. rogerellis.com
Lucky Stiff (Co-Director, they/them) is a trans and nonbinary director, writer and performer working in Chicago and New York. They build original experiences that combine nightclub culture, theater and performance art which have been featured at the Museum of Contemporary Art Chicago, Steppenwolf Theatre Company, Blue Man Group, Boy Friday Dance Company and Bushwig Festival of Drag, among many others. Most recently they directed Hullabaloo by Sarah Schecter for #Enough: Plays To End Gun Violence, presented digitally by the International Thespian Society. They hold an MFA in Directing for Theater from Northwestern University.

About Haven:
Ian Damont Martin (Artistic Director, he/they) is a writer/director by passion and a creative executive by trade. Ian is the Artistic Director of Haven Chicago, and the executive director of Inclusion & Belonging at the Art Institute of Chicago. Ian has worked with a number of arts and cultural institutions, including Enrich Chicago: a collaborative of arts, culture and funding institutions collectively engaging in the work of anti-racist and racial equity organizing. In 2016, he was awarded the Joyce Foundation-funded artistic producing apprenticeship at Goodman Theatre. Selected directing credits include Shakespeare’s Titus Andronicus, Twelfth Night and The Tempest; an adaptation of The Ridiculous Darkness by Wolfram Lotz for Sideshow Theatre; The Toilet by Amiri Baraka for Haven Chicago; a reading of The America Play by Susan Lori-Parks for Goodman Theatre. Ian is originally from Cincinnati, OH and gives love and gratitude to the people who helped shape the person he is today. iandamontmartin.com
Angela Salinas (Executive Director, she/her/hers) moved to Chicago in 2017 for the prestigious, year-long Production Management Apprenticeship at the Goodman Theatre. She had previously worked in several regional theaters including: The Oregon Shakespeare Festival, The Shakespeare Theatre of New Jersey, and Cal Shakes. Later that same year, Angela joined Haven Theatre serving as the Assistant Production Manager for that season's Director’s Haven. In January 2018, she was hired on as Haven’s General/Production Manager, and finally as of September 2019, Angela officially took the reins as the full-time Executive Director of Haven. Angela graduated with a Bachelor of the Arts in Stage Management and Lighting Design from California State University, Fresno. angelasalinas.com
MISSION
We embolden visionary artists to practice and hone their craft by providing an equitable haven of opportunity for the creation of innovative performance, theatre and media arts.
VALUES
Centering our artists, audiences and the work, Haven Chicago commits to the following values:
People First –We honor people for their stories, talents, contributions and spirit of collaboration by creating a safe and equitable working environment.
Inclusion – We aim to be accessible to all. As an anti-racist, multicultural institution, we value diversity, equity and inclusion.
Accountability – We cultivate trust and accountability to our community and mission through clear communication and intention.
Mentorship – We foster mentorship as a way of giving back to the community and carve pathways for the next generation of artists.
Posted by Bonnie Kenaz-Mara at 11:31 AM No comments: