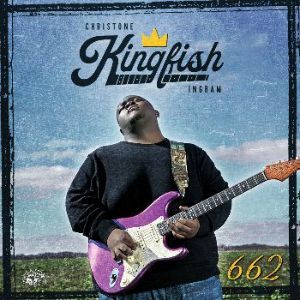 “Christone “Kingfish” Ingram has already made his mark as one of the best, and undoubtedly most exciting, blues guitarists in the world.”

“Ingram plays guitar with dramatic, searing tone and sure-handed authority. And that's just in the studio; he's even scarier live.”

Christone “Kingfish” Ingram will celebrate the release of his Grammy-nominated Alligator Records album, 662, with a live performance at The Vic Theatre in Chicago on Sunday, March 27, 2022. Ingram’s headlining tour, entitled Christone “Kingfish” Ingram Presents 662: Juke Joint Live, has already taken the 23-year-old guitarist, vocalist and songwriter across the U.S. and Europe, with many more dates to come. In addition to the Grammy nomination (his second in two years), 662 was named the #1 Best Blues Album of 2021 by UK tastemaker magazine, MOJO. Rolling Stone declared, “Kingfish is one of the most exciting young guitarists in years, with a sound that encompasses B.B. King, Jimi Hendrix and Prince.”

Check out the video for Long Distance Woman

Get your tickets HERE

Upon its July 2021 release, 662 debuted at #1 on the Billboard Blues Chart, and it's remained on the chart ever since. NPR's Morning Edition ran a 7-minute feature on release day. Buddy Guy called him “the next explosion of blues.” 662 was recorded in Nashville and co-written and produced by Grammy-winner Tom Hambridge. It features 13 songs (and one previously released bonus track) displaying many sides of Ingram’s personality, as well as his one-of-a-kind guitar and vocal skills.

According to Ingram, "662 is an ode to my roots, a nod to the area where I was born and raised. The title track, 662, encompasses how a small corner of the earth influenced my view of life and music. It also points to the growth I have had since my debut album. As much as I have been fortunate to get 'Outside Of This Town' (the title of his breakout single from his 2019 Grammy-nominated debut album, Kingfish), I do want people to know that the '662' will always be a major part of who I am."

Since the release of Kingfish, Ingram has quickly become the defining blues voice of his generation. From Clarksdale, Mississippi to stages around the world, the young musician has already headlined two national tours (Fish Grease I & II) and performed with friends including Vampire Weekend, Jason Isbell and Buddy Guy (with whom he appeared on Austin City Limits). He was interviewed by Sir Elton John on his Apple Music podcast Rocket Hour, and recently released songs with Bootsy Collins and Bobby Rush. In January 2021, Ingram was simultaneously on the covers of both Guitar World and DownBeat magazines, and graced the cover of Living Blues in late 2020. NPR Music says Ingram’s playing is “astounding…it’s almost like he's singing through the guitar.”

On 662, Ingram creates contemporary blues that speaks to his generation and beyond, delivering the full healing power of the music. No Depression calls Ingram, “a young bluesman with an ancient soul and a large presence in the here-and-now.” Living Blues says, “By any measure, Kingfish is one of the brightest new stars of his generation.”