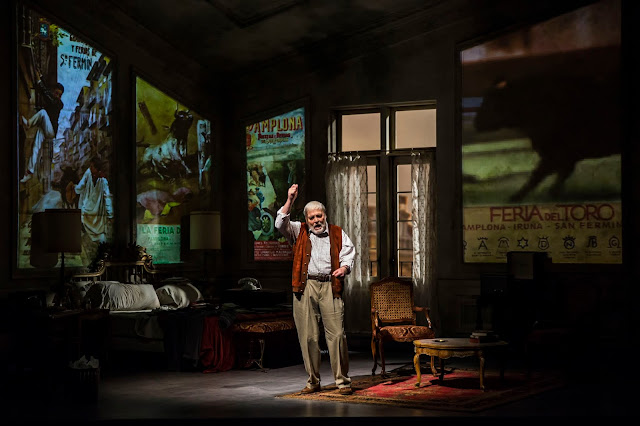 In Pamplona, after the prize comes the pressure. Basking in the glory of career-defining awards—the 1953 Pulitzer Prize and the coveted Nobel Prize for Literature in 1954—legendary writer Ernest Hemingway insists his best work is yet to come. Five years later, holed up in a Spanish hotel with a looming deadline, he struggles to knock out a story about the rivalrous matadors of Pamplona. But his real battles lie outside the bullfighting arena; in declining health, consumed by his troubled fourth marriage and tormented by the specter of past glories, he must now conquer the deepening despair that threatens to engulf him.

Pamplona is generously sponsored by the Elizabeth F. Cheney Foundation and The Peninsula Chicago is the Corporate Sponsor Partner.

Audio Described Performance, August 19 at 2pm – The action/text is audibly enhanced for patrons via headset

Ernest Hemingway (1899 – 1961) was born in Oak Park, IL, and got his start as a journalist writing for The Kansas City Star after attending Oak Park and River Forest High School. Shortly after, he joined the Red Cross during World War I, receiving the Italian Silver Medal of Bravery in 1918 for assisting soldiers, an experience that would inspire one of his most beloved works, A Farewell to Arms (1929). Following the war, he spent time in Paris, befriending the likes of Gertrude Stein, James Joyce and F. Scott Fitzgerald, and published his first collection, Three Stories and Ten Poems (1923). Next came his first novel, The Sun Also Rises (1926), about a group of British and American expatriates traveling to Pamplona, Spain. Among his many other great works are the Pulitzer Prize-winning The Old Man and the Sea, For the Whom Bell Tolls (Pulitzer Prize nomination), Green Hills of Africa, Death in the Afternoon and To Have and Have Not. On assignment, Hemingway was also present for some of World War II’s most noted events, including the liberation of Paris, and received a Bronze Star for bravery for his coverage of the war. Following the war, he spent an extensive amount of time in Cuba and in 1954, shortly after publishing The Old Man and the Sea, received the Nobel Prize for Literature. Hemingway was married four times, often tumultuously, to Elizabeth Hadley Richardson, Pauline Pfeiffer, Martha Gelhorn and Mary Welsh Hemingway. He had three sons, Jack, Patrick and Gregory. Troubled by financial issues, familial burdens and alcohol abuse, Hemingway took his own life in Idaho in 1961.

Stacy Keach (Ernest Hemingway) performed in top motion picture and television projects while continuing to add to his stage work, both classical and Broadway. His most recent motion picture, Gotti, starring John Travolta, is set to premiere in 2018. Other recent films include director Stephen Gaghan’s Gold, starring Matthew McConaughey, Edgar Ramirez and Bryce Dallas Howard; Truth, teamed with Cate Blanchett and Robert Redford; and the film adaptation of the Stephen King novel Cell, also starring John Cusack and Samuel L. Jackson. Keach’s filmography also includes John Huston’s Fat City co-starring Jeff Bridges, Alexander Payne’s Academy Award-nominated Nebraska, If I Stay, The Bourne Supremacy, Sin City: A Dame To Kill For, The Ninth Configuration,; The Heart Is A Lonely Hunter, Doc, Up In Smoke, American History, and the classic western The Long-Riders, which he produced with his brother James Keach. Keach recently finished filming the second season of the CBS award-winning comedy series Man With A Plan, alongside Matt LeBlanc and Kevin Nealon. He was one of the stars of the NBC comedy series Crowded, and he guest-starred on Showtime’s Ray Donovan, starring Liev Schreiber and Jon Voight. He also guest-starred on Starz’s second season of Blunt Talk, starring Sir Patrick Stewart, and continues on a recurring role on CBS’ Blue Bloods, starring Tom Selleck. His prior television series credits include his title role performance in Mickey Spillane’s Mike Hammer and Titus. He has been seen on many hit shows such as Two and a Half Men, Prison Break, NCIS: New Orleans and Hot In Cleveland. As a narrator, he has been heard in many documentaries and books on tape. He is also the narrator on CNBC’s American Greed. Keach is considered a pre-eminent American interpreter of Shakespeare, with his Shakespearean roles including Hamlet, Henry V, Coriolanus, Falstaff, Macbeth, Richard III and King Lear (at Goodman Theatre and Shakespeare Theatre in Washington, D.C., directed by Robert Falls). He also led the national touring company cast of Frost/Nixon, portraying Richard M. Nixon. Keach’s memoir, All in All: An Actor’s Life On and Off the Stage, was an initial recipient of the Prism Literary Award for work addressing overcoming addictive behavior. His performance honors include a Best Actor Golden Globe Award, three OBIE Awards, three Vernon Rice Awards, two Drama Desk Awards, three Helen Hayes Awards, the prestigious Millennium Recognition Award and the Will Award, and he has been nominated for Emmy and Tony Awards. In 2015, he was inducted into the American Theater Hall of Fame. In 2016, Keach received a Hollywood Film Award for Best Ensemble in the film Gold. He also received the 2016 Best Narrator Award from the Society of Voice Arts and Sciences in the category of Crime and Thriller for his work on the Mike Hammer audio novels. Keach was a Fulbright scholar to the London Academy of Music and Dramatic Art and attended the University of California at Berkeley and the Yale School of Drama. Keach has been married to his wife Malgosia for 31 years, and they have two children, son Shannon and daughter Karolina.

Jim McGrath’s first short play, Trail of the Westwoods Pewee, was presented at the West Bank Theatre in New York City in 1987. The next year saw the production of his first full-length play, Bob’s Guns, at the Director’s Company in New York. In 1992, New Jersey’s Passage Theatre produced his play Roebling Steel. In 1995, the Met Theatre in Los Angeles premiered The Ellis Jump, which won McGrath the Ovation Award for Best Writing of a World Premier Play. For television, he wrote detective stories for Simon & Simon, The Father Dowling Mysteries, Matlock, Mike Hammer and Over My Dead Body, as well as the children’s series Wishbone and Liberty Kids, science fiction series Quantum Leap, Codename Eternity and Dark Realm and the television films Elvis: The Early Years and Silver Bells (starring Anne Heche). He also co-wrote the screenplay for the feature film Kickboxer: Vengeance. In 2012, he produced and wrote the documentary Momo: The Sam Giancana Story, which won Best Documentary Awards at the Bel Air Film Festival and The Monaco International Film Festival. He has taught creative writing courses at Patton State Prison in San Bernardino, California State Home for Veterans in Los Angeles and The Center Theater in Chicago. He was trained as an artist leader with Imagination Workshop, by founders Margaret Ladd and Lyle Kessler in 1983, for which he worked with mentally ill and homeless clients for decades as a theater artist. In 2010, he became Executive Director of Imagination Workshop. McGrath is a native of Dallas, Texas. After graduating SMU, he attended Princeton Theological Seminary for two years before embarking on his playwriting career.

Robert Falls (Goodman Theatre Artistic Director) previously directed at the Goodman the world premiere of Rogelio Martinez’s Blind Date, the Chicago premiere of Rebecca Gilman’s Soups, Stews, and Casseroles: 1976, and partnered with Goodman Playwright-in-Residence Seth Bockley to direct their world premiere adaptation of Roberto Bolaño’s 2666 (Jeff Award for Best Adaptation). Falls will direct a new production of Henrik Ibsen’s An Enemy of the People (March 10 – April 15, 2018) at the Goodman, and also remount his Lyric Opera of Chicago production of Mozart’s Don Giovanni for the Dallas Opera (April 2018). Recent productions also include The Iceman Cometh for the Brooklyn Academy of Music, Rebecca Gilman’s Luna Gale for the Center Theatre Group in Los Angeles, Measure for Measure and the world and off-Broadway premieres of Beth Henley’s The Jacksonian. Among his other credits are The Seagull, King Lear, Desire Under the Elms, John Logan’s Red, Jon Robin Baitz’s Three Hotels, Eric Bogosian’s Talk Radio and Conor McPherson’s Shining City; the world premieres of Richard Nelson’s Frank’s Home, Arthur Miller’s Finishing the Picture, Eric Bogosian’s Griller, Steve Tesich’s The Speed of Darkness and On the Open Road, John Logan’s Riverview: A Melodrama with Music and Rebecca Gilman’s A True History of the Johnstown Flood, Blue Surge and Dollhouse; the American premiere of Alan Ayckbourn’s House and Garden; and the Broadway premiere of Elton John and Tim Rice’s Aida. Mr. Falls’ honors for directing include, among others, a Tony Award (Death of a Salesman), a Drama Desk Award (Long Day’s Journey into Night), an Obie Award (subUrbia), a Helen Hayes Award (King Lear) and multiple Jeff Awards (including a 2012 Jeff Award for The Iceman Cometh). For “outstanding contributions to theater,” Mr. Falls has been recognized with such prestigious honors as the Savva Morozov Diamond Award (Moscow Art Theatre), the O’Neill Medallion (Eugene O’Neill Society), the Distinguished Service to the Arts Award (Lawyers for the Creative Arts), the Illinois Arts Council Governor’s Award and induction into the Theater Hall of Fame.

About Goodman Theatre
AMERICA’S “BEST REGIONAL THEATRE” (Time magazine), Goodman Theatre is a premier not-for-profit organization distinguished by the excellence and scope of its artistic programming and civic engagement. Led by Artistic Director Robert Falls and Executive Director Roche Schulfer, the theater’s artistic priorities include new play development (more than 150 world or American premieres), large scale musical theater works and reimagined classics (celebrated revivals include Falls’ productions of Death of a Salesman and The Iceman Cometh). Goodman Theatre artists and productions have earned two Pulitzer Prizes, 22 Tony Awards, over 160 Jeff Awards and many more accolades. In addition, the Goodman is the first theater in the world to produce all 10 plays in August Wilson’s “American Century Cycle” and its annual holiday tradition A Christmas Carol, which celebrated its 40th anniversary this season, has created a new generation of theatergoers. The Goodman also frequently serves as a production partner with local off-Loop theaters and national and international companies by providing financial support or physical space for a variety of artistic endeavors.

Posted by Bonnie Kenaz-Mara at 2:07 PM No comments: