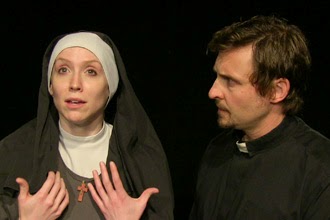 The story at the heart of MIRACLES IN THE FALL centers on the life of Clare Connelly, a nun in 1968 Detroit who discovers secrets about her family that have driven their collective shame and disastrous life decisions. Deep betrayals of the past twist the lives of the Connellys, but faith, family and forgiveness allow redemption for some.

MIRACLES IN THE FALL was developed in POLARITY ENSEMBLE THEATRE 2013 DIONYSOS CUP FESTIVAL OF NEW PLAYS. It is the eighth Polarity-developed play by a Chicago-area playwright to reach its world premiere on a Chicago stage.

About the Playwright:
Chuck O’Connor is a Network Playwright with Chicago Dramatists. His work has been selected as a Heideman Award Finalist with Actor’s Theater of Louisville and as winner of the 2013 Dionysos Cup at Polarity Ensemble Theatre. Recently, Chuck turned his focus to international issues, working with the United Nations “Stop Rape Now” program, developing pieces that empower woman in Ukraine and Turkey. Cheryl Coons, Resident Playwright at Chicago Dramatists and board member at Porchlight Theater, described Chuck’s writing as, “. . . sophisticated, dramatic, thoughtful, and heartfelt. He writes about big ideas, and yet his stories are firmly grounded in his authentic and dimensional characters.” Chuck holds a Bachelor’s Degree in Liberal Arts from Michigan State University and a Master’s Degree from Loyola University-Chicago. He lives in Evanston with his wife and two small children.

About the Director
Richard Shavzin is delighted to return to Polarity after directing last season's Never The Bridesmaid, especially to do another new play. Other world premiere credits include Marisa Wegrzyn’s Ten Cent Night (Chicago Dramatists); Defamation, Tops or Bottoms, and Fallout (Canamac Productions); Beat The Jester and Slaphappy (Beat The Jester Productions); Changing Rainbows (Red Wolf Theatre); Klub Kokomo (PS Theatricals); and Studs Terkel's Race (adapted by Jamie Pachino) at Strawdog Theatre, where he was Artistic Director from 1993-1998. Also at Strawdog he won a Jeff for Direction for Burn This, and directed the Jeff Nominated productions of Criminal Hearts; Cat's-Paw; The Big Funk; A Mother, A Daughter and A Gun; Skeletons and Hurlyburly, which won 4 Jeffs. Other credits include the Chicago premiere of Vick’s Boy for American Theater Company (American Blues), Endangered for Stage Left’s Leapfest, and the workshop production of the musical Any Someone At All at Second City’s Skybox Theater.

Richard is an Associate Artist at Chicago Dramatists and an Artistic Affiliate at American Blues Theater. He served on the Board of Directors of the League of Chicago Theatres from 1994-2000, and served two terms, one as chair, on the Theatre Peer Review Panel of the City of Chicago Department of Cultural Affairs. He currently serves on the National Council of Actors Equity Association, and on the National Board of Directors of SAG-AFTRA.


Founded in 2004, Polarity Ensemble Theatre is a professionally diverse group of artists who strive to advance the state of Chicago theater for both local and international audiences by developing new works and bringing new life to the classics through live performance, workshops, and publishing.
Posted by Bonnie Kenaz-Mara at 10:45 AM No comments: