OPENING: The National Theatre of Great Britain’s An Inspector Calls To Play Chicago Shakespeare Theater's The Yard Through March 10, 2019 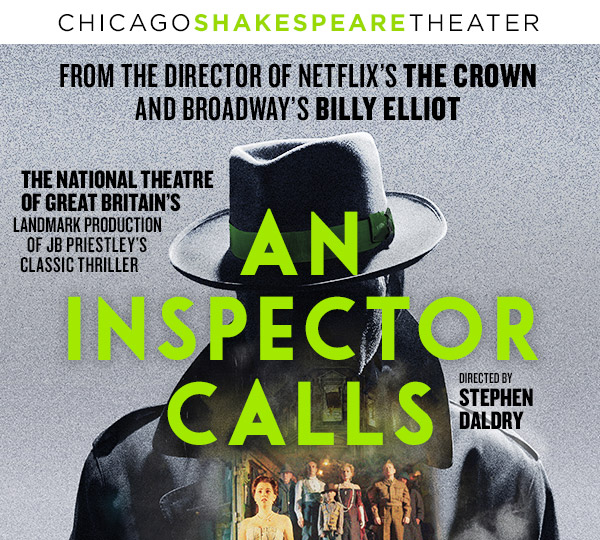 I'll be out February 20th for the press opening, so check back soon for my full review.

Chicago Shakespeare Theater presents the National Theatre of Great Britain’s award-winning production of JB Priestley’s classic thriller An Inspector Calls, hailed by the Evening Standard as “an epic for our epoch, a thrillingly physical piece of theatre—with the power to stir the heart as much as the mind.” The production is staged by Stephen Daldry, whose extraordinary career spans genres from the hit Netflix series The Crown; to films, with Oscar-nominated pictures like The Reader, The Hours, Billy Elliot, and Extremely Loud and Incredibly Close; to the stage, where his Billy Elliot the Musical was honored with ten Tony Awards, and his current production of The Inheritance is enjoying an acclaimed run in London’s West End.

An Inspector Calls is featured in a special limited engagement in The Yard at Chicago Shakespeare, February 19–March 10, 2019.

Winner of 19 major accolades, including multiple Olivier, Tony, Drama Desk, and Critics Circle Awards, this international touring production of An Inspector Calls is the longest running revival of a play in history—now seen by more than 4 million theatregoers worldwide. This suspenseful masterpiece begins when the mysterious Inspector Goole calls unexpectedly on the prosperous Birling home, shattering their peaceful family dinner party with his investigation into the death of a young woman. Revelations shake the foundations of the family’s lives, prompting an examination of their consciences.

The Washington Post called it, “elegant…an evening of many dark and twisting delights.” The Guardian hailed it, “spine-tingling. Lushly operatic, yet hard as steel—grabs you by the throat and won't let you go” and The Telegraph raved, “there’ll never be a better production… always speaks to the changing political moment.”

Artistic Director Barbara Gaines shared, “We’re elated to share Stephen Daldry’s award-winning production with Chicago. The larger-than-life scale of this thriller will have audiences on the edges of their seats—and you’ll see why they call it the ‘theatrical event of a generation’ in the UK. Simply no one does this work better than Stephen Daldry.”

An Inspector Calls will be presented in The Yard at Chicago Shakespeare, February 19–March 10, 2019. Single tickets ($46–$88) are on sale now. Special discounts will be available for groups of 10 or more. For more information, contact Chicago Shakespeare Theater’s Box Office at 312.595.5600 or visit the Theater’s website at www.chicagoshakes.com.

ABOUT STEPHEN DALDRY
Stephen Daldry (Director), lauded for his work as director and producer of film, theater, and television, is Executive Producer and Director on the highly acclaimed Netflix series The Crown. He directed The Inheritance by Matthew Lopez to critical acclaim and a sell-out run at the Young Vic Theatre; it transferred to the Noel Coward Theatre this fall and will premiere next year on Broadway. Currently, Daldry’s coproduction, with director Justin Martin, of The Jungle by Joe Murphy and Joe Robertson is playing to huge acclaim at the Playhouse Theatre after its highly successful run at the Young Vic Theatre and will have its American premiere this month at St Ann’s Warehouse in New York. He was Creative Executive Producer of the Opening and Closing Ceremonies for the London 2012 Olympic and Paralympic Games. He has also directed at the National Theatre, the Public Theatre in New York and transferred many productions both to Broadway and the West End, including his award-winning 1992 National Theatre production of An Inspector Calls. Billy Elliot the Musical opened at the Victoria Palace Theatre in 2005 where it ran for 11 years. It has also played on Broadway, in Holland, Seoul, Sydney, Melbourne, Chicago, Toronto, Tokyo and across the US. In 2009, the production won ten Tony awards, including Best Musical, more than any other British show in Broadway history. It recently completed an 18 month tour of the UK and Ireland, finishing its highly successful run in Hamburg. Daldry directed The Audience and Skylight to critical acclaim both in London and on Broadway with Skylight winning a Tony award for Best Revival. His first four films, Billy Elliot, The Hours, The Reader and Extremely Loud and Incredibly Close, together received 19 Academy Award® nominations and two wins. His film, Trash, set in the favelas of Rio de Janeiro, was nominated for Best Film Not in the English Language at the 2015 BAFTAs. He also directed for BBC Radio and Television. He is Co-Director of Pier 55 in New York and also on the Board of The Perelman Arts Center at the World Trade Center, Ground Zero, New York. Daldry started his career at the Sheffield Crucible Theatre and directed extensively in Britain’s regional theaters. In London he was Artistic Director of the Gate Theatre and the Royal Court Theatre where he headed the £26 million redevelopment.

Diana Payne-Myers (Edna) was a dancer at Ballet Rambert at the Mercury Theatre, Notting Hill Gate, 1948. She has most recently worked in Scotland with Barrowland Ballet (Natasha Gilmore’s Glasgow based company) in A Conversation with Carmel 2013 (co-produced by Scottish Arts & Stratford East) at the Tramway Theatre, Glasgow; Stratford East, London & 2 Scotland tours concluding the Edinburgh Fringe Festival 2011. Other recent credits include: Further work with Matthew Hawkins at Edinburgh Festival (2007), Red Ladies (2014) at the Southbank Centre, Malvern & Margate, God’s Garden with Arthur Pita – created and presented in Ipswich followed by performances in Birmingham & later with a company at the Royal Opera House, London. Diana has also performed at the 2000 Sydney Olympics Arts Festival with DV8 Physical Theatre company piece Can we afford this? The cost of living (Everest Theatre, Sydney). It later toured to London and Hong Kong. Other work with DV8 includes Strange Fish (European tour) and Bound to Please which toured Europe 1999-2000. Diana returns to the role of Edna having performed in An Inspector Calls at the Garrick Theatre, the Aldwich Theatre, two UK tours & the Australia tour.

Hamish Riddle (Eric Birling). Prior to training he was a member of the National Youth Theatre Rep Company. THEATRE: Manning (The Arches/Encounter Festival/Brno), Tory Boyz, Prince Of Denmark, Romeo And Juliet, Pope Joan, Black And White, As You Like It (N.Y.T.) and Prince Of Denmark (National Theatre). Theatre whilst training includes: 13, The Country Wife, Merchant of Venice and The Seagull (all for R.C.S.) Hamish also took part in the London 2012 Olympics Welcoming Ceremony as part of the N.Y.T. TRAINING: The Royal Conservatoire of Scotland.

CREATIVE TEAM
Tony-Award winning Set and Costume Designer Ian MacNeil’s work includes Billy Elliot the Musical in the West End, Australia on Broadway (Tony Award - Best Designer); Albert Speer, Machinal (Critic’s Circle Award-winner) and An Inspector Calls (also West End and International; Olivier and Critic’s Circle Awards-winner) at the National; Far Away, Via Dolorosa (also on Broadway and the West End), This is a Chair, Death and the Maiden (also West End), Plasticine (Evening Standard Award-winner Best Designer) and A Number for the Royal Court; Afore Night Come (the Young Vic); The Ingolstadt Plays, Figaro Gets Divorced and Jerker at the Gate; Enter Achilles and Bound to Please for DV8; and Festen (The Almeida – also West End and Broadway; Evening Standard Award- winner, Best Designer). Recent designs include Vernon God Little and A Doll’s House at the Young Vic and Brooklyn Academy of Music; In Basildon at the Royal Court; Desire Under the Elms at the Lyric Hammersmith; The Amen Corner at the National Theatre; Betrayal on Broadway; Birdland at the Royal Court, and Everyman at the National.

Academy Award-winning Composer Stephen Warbeck began studying piano and composing at the age of four. After eight years of working as a composer and performer for the stage Stephen began writing music for film and television and has since built up considerable filmography credits. He has written music for more than 40 television projects and has received five BAFTA nominations and in 2013 a BAFTA Award for his work on Henry IV, Parts 1 & 2. Other recent television projects include Indian Summers and first two series of A Young Doctor’s Notebook. Stephen has scored many feature films including: Mon Roi, Seve, Polisse, Proof, Mrs. Brown, Mystery Men, Quills, Billy Elliot, Captain Corelli’s Mandolin, Birthday Girl and Shakespeare in Love, for which he won an Academy Award. His other notable stage productions include: the Globe’s Richard II, the Donmar’s Temple, the RSC’s Wolf Hall and Bring Up The Bodies; the Royal Court’s The River and Jerusalem (both West End and Broadway transfers) and The Seagull; The National Theatre’s The Red Lion, The Silver Tassie, This House, The Veil; John Madden’s Proof, Sam Mendes’ To The Green Fields Beyond; Old Times and Betrayal at the Harold Pinter Theatre and many productions for Shakespeare’s Globe Theatre, The Almeida and West End theatres. In addition to composing for film and television, Stephen has written music for numerous radio plays and written several concert pieces. Peter Pan is his first ballet score.

Associate Director Julian Webber adapted and directed The Three Musketeers at the Young Vic Theatre, which was nominated for a Barclay’s Theatre Award in 2002; more recently, the West End revival of The Shape of Things by Neil Labute, and The Barber of Seville at the Bristol Old Vic in a new adaptation by Lee Hall. For eight years Julian was Artistic Director of Soho Rep, New York and is currently Associate Director for Billy Elliot the Musical, for which he won a Helpmann Award for the production in Sydney, Australia, and last year, mounted in Holland.

ABOUT CHICAGO SHAKESPEARE THEATER
Under the leadership of Artistic Director Barbara Gaines and Executive Director Criss Henderson, Chicago Shakespeare has redefined what a great American Shakespeare theater can be—a company that defies theatrical category. This Regional Tony Award-winning theater’s year-round season features as many as twenty productions and 650 performances—including plays, musicals, world premieres, family programming, and presentations from around the globe. Chicago Shakespeare is the city’s leading presenter of international work, and has toured its own productions across five continents. The Theater’s nationally acclaimed arts in literacy programs support the work of teachers, and bring Shakespeare to life on stage for tens of thousands of students annually. Each summer, the company tours a free professional production to neighborhood parks across Chicago. In 2017 the Theater unveiled The Yard, which, together with the Jentes Family Courtyard Theater and the Thoma Theater Upstairs, positions Chicago Shakespeare as Chicago’s most versatile performing arts center.

Posted by Bonnie Kenaz-Mara at 4:29 PM No comments: