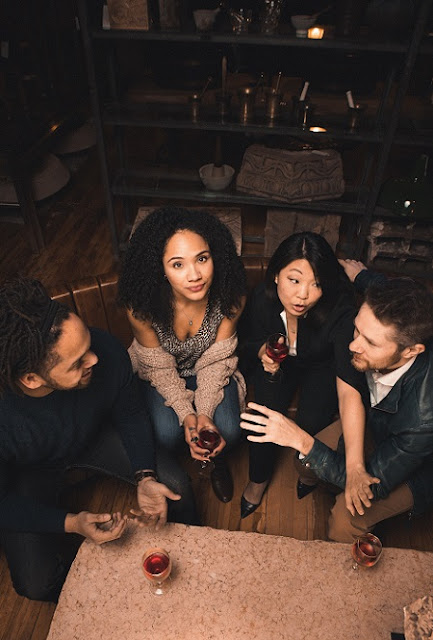 
**Advisory: Recommended for ages 18 and up. This production contains use of profanity and sexual situations.**

Four intelligent, attractive and opinionated young urban professionals—a doctor, an actress, a psychologist and a neurobiologist studying the human brain’s response to race—search for love, success and identity while also attempting to navigate the intricacies of racial and sexual politics. This whip-smart new play taps into current cultural conversation in an enthralling and provocative way, taking on deep questions of the nature of prejudice with razor sharp wit.

Smart People premiered at the Huntington Theatre in Boston in May of 2014 under the direction of Peter DuBois.

Staged in WT’s intimate Gillian Theatre, this sexy, serious and fiercely funny new play explores the inescapable nature of racism and other tricky topics with rapid fire dialogue, shattering assumptions about our culture’s ingrained attitudes of racism, sexism and classism. Audiences will be captivated by one of the smartest new plays of its time.

“Smart People manages to be a progressive provocative and sophisticated conversation about race while also being thoroughly entertaining and even hilarious,” said Artistic Director Michael Halberstam. “This combination of superlatives defines the work of playwright Lydia Diamond. She is uncompromising in how she engages with her subject matter and yet remains completely generous to the audience, never forgetting the reasons we choose to go to the theatre in the first place.  We are delighted to welcome director Hallie Gordon, making her Writers Theatre debut, with a first rate cast and superb design team.  I invite you to stay around in the lobby for a drink and some conversation following the performance.  There will be SO much to talk about!"

Hallie Gordon is directing at Writers for the first time. She recently directed Cal and Camo and Dry Land at Rivendell Theatre Company and HIR, The Rembrandt and Monster at Steppenwolf.

Tickets are priced $35 - $80. Subscriptions and individual tickets may be purchased online at www.writerstheatre.org, by phone at 847-242-6000 or in person at the box office at 325 Tudor Court in Glencoe.

Hallie Gordon (Director) most recently directed Cal and Camo and Dry Land at Rivendell Theatre Company, where she is also an ensemble member. She serves as Artistic Producer for Steppenwolf Theatre Company, where she most recently directed HIR, The Rembrandt and Monster. She is the recipient of The Helen Coburn Meier & Tim Meier Achievement Award.

Kayla Carter (Valerie Johnston) has worked with The Shakespeare Project of Chicago and Artemisia. Regional credits include River City (NNPN World Premiere, Actor’s Theatre of Charlotte and Phoenix Theatre Indianapolis), the World Premiere of The Patron Saint of Losing Sleep and Passing Strange (Actor’s Theatre of Charlotte). TV credits include Chicago Med (NBC) and APB (Fox). She is a graduate of University of North Carolina School of the Arts.

Deanna Myers (Ginny Yang) previously appeared at Writers Theatre in The Scene. Selected Chicago credits inlcude: That’s Weird, Grandma! (Barrel of Monkeys), Two Mile Hollow (First Floor Theatre), You on the Moors Now (The Hypocrites), The Chicago and Miami Productions of The Hammer Trinity (The House Theatre), SideShow (Porchlight Music Theatre), The New Stages Production of King of the Yees, The White Snake (Goodman Theatre), The Golden Dragon (Sideshow Theatre) and The Three Musketeers (Lifeline Theatre).  TV/Film Credits include: Hot Date, Chicago Fire and The Drunk. Deanna is a proud company member at Barrel of Monkeys, where she finds her favorite young playwrights among the students in CPS classrooms. She is a perpetual student at the Actors Gymnasium.

Sunday Spotlight— Sunday, May 13, 2018 after the matinee performance
Are you curious about the world that surrounds your favorite plays? Sunday Spotlight offers access to the finest speakers, scholars and cultural leaders. This one-hour event extends the conversation on our stages by featuring an expert in an area connected to the play. Seating is limited. RSVP is required. Save the date!

The Making of… Series— Monday, May 21, 2018 at 6:30pm
Ever wonder what goes on behind the scenes of our productions? For each production, we will offer insight into a different aspect of creating theatre. Enjoy a short and lively presentation by our actors, designers or other experts who will walk you through the process of preparing for and executing a production. Seating is limited. RSVP is required. Save the date!

Post Show Conversation: The Word
Join us after every Tuesday evening performance (excluding previews and extensions) for a 15-minute discussion of the play, facilitated by a member of the WT Artistic Team.

RIDE METRA TO WRITERS THEATRE
In an effort to promote taking public transit to the Theatre, Writers Theatre launched a new promotion in 2013. Any audience member who purchases a ticket to a Writers Theatre production and rides Metra’s Union Pacific North Line to the Theatre may snap a photo of themselves on the train and post it to their Facebook or Instagram page or their Twitter feed with a tag of @WritersTheatre and #[the title of the show], and upon showing the post at the Writers Theatre Box Office, receive $5 in cash to put toward the cost of your fare as a thank you for going green.

WRITERS THEATRE PARTNERS
Writers Theatre is pleased to welcome back BMO Harris Bank as the 2017/18 Season Sponsor, and ComEd as the Official Lighting Sponsor of the 2017/18 Season. The Major Production Sponsors of Smart People are Sara and Dan Cohan and Mary Winton Green. Artists Council Sponsors are Jane and Richard Lipton, Laurie and Michael Petersen, and Marilynn and Carl Thoma. Additional production support for is provided by the Patricia Dodson Family Foundation.

Prices: Prices for all performances range from $35 - $80
Purchase early for best prices

Posted by Bonnie Kenaz-Mara at 2:39 PM No comments: