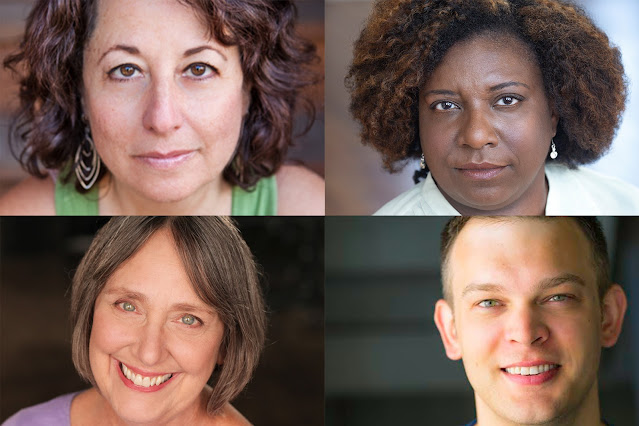 Shattered Globe Theatre is pleased to present a revival of Chicago writer Joel Drake Johnson’s Rasheeda Speaking, directed by SGT Associate Artistic Director AmBer D. Montgomery. This comedy-turned-social thriller about workplace racism will play April 22 – June 4, 2022 at Theater Wit, 1229 W. Belmont Ave. in Chicago’s Lakeview neighborhood. Tickets are currently available at www.sgtheatre.org, by calling (773) 975-8150 or in person at the Theater Wit Box Office. I'll be out for the press opening April 25th so check back then for my full review.

Whether it’s the doctor’s inability to remember her name, or the toxic fumes radiating from the Xerox machine and lab next door, Dr. Williams’ office is not made for Jaclyn. As the only Black woman in the office, Jaclyn is determined to keep her job. But when Dr. Williams promotes her White co-worker, Ileen, and asks her to spy on their only Black co-worker, Jaclyn has her work cut out for her. Fueled by a fear of difference and looming racial uprising, how far will Jaclyn, Ileen and Dr. Williams go?

Comments SGT Producing Artistic Producer Sandy Shinner, “Shattered Globe is celebrating playwright Joel Drake Johnson with this revival of his workplace thriller Rasheeda Speaking. In the fall of 2019, shortly before Joel’s death in early 2020, I told him we would commit to producing this revival with Deanna Reed-Foster as Jaclyn, and he was thrilled. In the world premiere production at Rivendell Theater in 2013, Deanna was cast as the understudy and Joel could always hear her voice as Jaclyn. Now, almost 10 years later, the play will resonate differently, and I am thrilled that SGT’s Associate Artistic Director AmBer Montgomery is directing this new production with a powerhouse design team. Rasheeda Speaking is sure to entertain and challenge our audiences.”

Curtain Times: Thursdays, Fridays, Saturdays at 8 pm; Sundays at 3 pm. Please note: there will be added performances on Monday, May 16 at 8 pm (industry night) and Saturday, June 4 at 2:30 pm; there will not be a performance on Thursday, May 19 at 8 pm.

Shattered Globe understands that ticket prices can pose a financial burden and, at times, an obstacle for theatregoers. A number of waived tickets are available on a first-come, first-serve basis for students and community members experiencing access barriers to theatre. If you would like to be added to SGT’s Waived Ticket Waitlist, please e-mail lswanson@shatteredglobe.org. Please note: all requests must be completed by 12 pm the Friday before the performance you would like to attend. The e-mail will not be monitored at all on weekends or after 5 pm on weekdays.

Joel Drake Johnson (Playwright) is an award winning, internationally-produced playwright and teacher best known for his work at Chicago’s Victory Garden's Theater, where he was a member of the company’s Playwrights Ensemble for many years. His plays include Rasheeda Speaking, Four Places, A Blue Moon, As The Beaver, The End of the Tour, The Fall To Earth, A Blameless Life and Tranquillity Woods. His work has also been produced in Chicago at Steppenwolf Theatre and globally in New York City, Los Angeles, London, and many other cities.

AmBer D. Montgomery (Director, she/her) is an emerging director, educator and multi-disciplinary artist from Detroit, Michigan. She has created a career centered around amplifying the voices of Chicago youth and creating work that stands on the legacy of black theater makers before her. Originally trained as an actor, her transition to directing in Chicago has included her associate and assistant directing credits for many major productions including School Girls or the African Mean Girls Play (Goodman Theatre), Sheepdog (Shattered Globe Theatre), LINDIWE (Steppenwolf Theatre), Too Heavy for Your Pocket (TimeLine Theatre), Ma Rainey’s Black Bottom (Writers Theatre), Measure for Measure (American Players Theater) and First Love is the Revolution (Steep Theatre). Her other director’s credits include: Snow Queen (The House Theater), Countess Dracula (Otherworld Theater) and hippolytos (Story Theater New Play Festival). She was awarded a 2020 FAIR Assistantship at Oregon Shakespeare Festival, 2018 Fellowship at Steppenwolf Theatre in their Department of Education/SYA and an internship at Penumbra Theater’s Summer Institute: Pedagogies for Social Change. She has attended training programs at the Globe Theater in London and LISPA (Now Arthaus Berlin). Amber holds a BFA in Acting from the University of Minnesota Guthrie

Shattered Globe Theatre (Sandy Shinner, Producing Artistic Director) was born in a storefront space on Halsted Street in 1991. Since then, SGT has produced more than 80 plays, including nine American and world premieres, and garnered an impressive 42 Jeff Awards and 107 Jeff Award nominations, as well as the acclaim of critics and audiences alike.

Shattered Globe Theatre seeks to discover new connections between story, artist and audience by exploring drama from bold, challenging perspectives, and continuously redefining what it means to be an ensemble theater.

SGT’s values are rooted in a commitment to racial equity, respect for all artists and support for the ensemble, while creating new opportunities to amplify traditionally marginalized voices and collaborate in all aspects of our work. Through initiatives such as the Protégé Program, Shattered Globe creates a space which allows emerging artists to grow and share in the ensemble experience.

Posted by Bonnie Kenaz-Mara at 5:24 PM No comments: