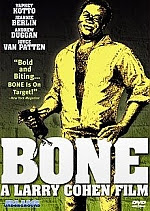 Advertised as a Black Man Out For White Women movie, audiences were probably more shocked to find out Larry Cohen’s directorial debut was more of a Black Comedy. After taking a Beverly Hills family hostage, Bone discovers that under their seemingly nice life, lies many dark secrets. Whether you’re a “Housewife” (alternate title) or just a movie lover, you won’t want to miss this! With writer/director Larry Cohen on hand to discuss his 1972 film!

About BONE:
This brilliant, edgy and dark comedy by cult director Larry Cohen serves as an interesting time capsule look into early 1970's race relations. Yaphet Kotto stars as a mysterious African-American man who invades the home of a wealthy Beverly Hills couple. At first he demands money and sex, but an array of Polynesian cocktails finds him embroiled the in the couple's rocky and complicated relationship. Not a thriller, however, the film cleverly uses a juxtaposition of stereotypes to expose issues of racism and consumerism. Strong dialogue and acting and an eclectic musical score with some heavy funk and jazz overtones by Gil Melle gives the film a distinctly offbeat, unmistakably 1970s feel.
Director: Larry Cohen
Writer: Larry Cohen
Stars: Yaphet Kotto, Andrew Duggan, Joyce Van Patten