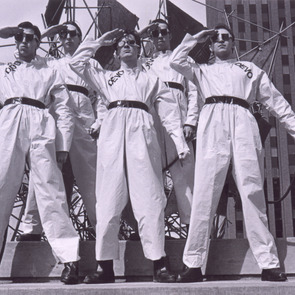 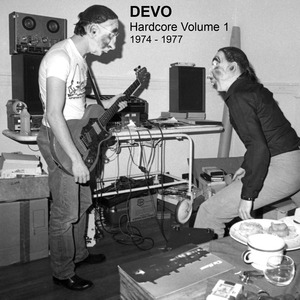 ChiIL Live Shows recently caught up with Devo on their tour with Blondie, hilariously named The Whip Her to Shreds Tour.  They've still got it.  Chicago Theatre was hopping and the guys put on an excellent, high energy show.   Now were happy to announce they're reissuing Hardcore with two new releases from the archives.

DEVO is pleased to announce that Hardcore Volumes 1 & 2 have been reissued and are available at digital retailers worldwide today.  Hardcore has also been released today as a limited pressing of vinyl, with the double CD album to follow shortly after with a July 9 release date, via Superior Viaduct.
DEVO's Hardcore Volumes 1 & 2 document DEVO history with early 4-track recordings made between 1974-1977. Containing some of the earliest DEVO output, Hardcore includes rarely-heard tracks alongside demos of classic songs like "Satisfaction," "Jocko Homo," and "Mongoloid." The collections were only briefly released in the early 90s and have been long out of print.
Reminiscing on the process behind these essential pieces of punk history, Gerald Casale says:
1974. The rough beginning of our Hardcore Devo recording struggles began in a basement in Akron, Ohio. Bob Mothersbaugh and myself would get right to work after our day jobs deconstructing various sonic fragments, picking and pulsing into the late hours interrupted only by a mandatory fast food break. Soon, Mark and Jim Mothersbaugh joined the nightly sessions. By late 1976, when the rental location changed and the basement was bigger, we had all 5 Devo cylinders pumping in galvanized, industrial force with Mark Mothersbaugh on keyboards and Moog and Arp synthesizers, Bob Mothersbaugh on lead guitar, Bob Casale on rhythm guitar, Alan Myers on drums and myself on bass. By the summer of 1977 we had over 40 songs including the finished 4-track versions of all the songs that would eventually appear on the first two albums of our label deal with the devil. The beginning really was the end. However, beginnings, no matter how rough, are always good. Listen and see for yourself.

Listen to “Auto Modown” from Hardcore Vol. 1 exclusively at RollingStone.com
To celebrate the release of this classic album, DEVO has selected two additional releases from the archives to be made available digitally for the first time. Something Else for Everybody and Live 1981 Seattle are now available for pre-order digitally on iTunes. Something Else for Everybody features demos and outtakes from the 2010 release Something for Everybody, while Live 1981 Seattle contains a rare live recording from the “New Traditionalists” tour. Both albums will be released on July 23.
In addition, all of these digital albums are available at http://devohardcore.com, either individually or bundled with both Hardcore volumes.