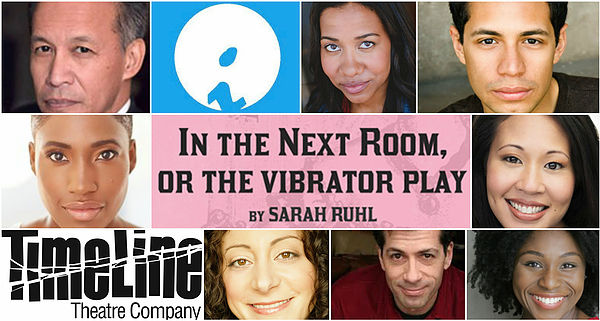 Here at ChiIL Live Shows we thoroughly enjoy both Sarah Ruhl's writing and TimeLine Theatre Company's productions. Even though this one's just a staged reading at this point, it sounds intriguing.

The reading, presented in partnership with TimeLine Theatre Company and The League of Chicago Theatres, will take place on Tuesday, August 9, 2016 at 7pm at TimeLine Theatre, 615 W. Wellington Ave., Chicago.

The reading is free and open to the public, but seating is very limited and reservations are required. Seats may be reserved HERE or by calling the TimeLine Theatre box office at 773-281-8463 ext 6.

“When we first sat down with the artistic staff at TimeLine over a year ago, we discussed the challenges that arise in casting choices, particularly when it comes to addressing historical context,” says TCIP Founder and Producer Emjoy Gavino. “It is an issue that many directors who tackle shows set in a specific time period often struggle with. It has been a joy to approach such a beloved text with the idea of ’open casting,’ releasing the decision makers from any pre-conceived notions of what the characters have been or ‘are supposed to be.’ We are excited at how the choices will open the play up.”

“TimeLine Theatre Company is proud to partner with the Chicago Inclusion Project,” added TimeLine Artistic Director PJ Powers. “We are inspired by their mission and work, and we join them in the quest for inclusivity and bringing people together for shared theatre experiences that ignite conversation and new points of view. Under the direction of TimeLine Company Member Mechelle Moe, we look forward to bringing a diverse group of artists and audience members to our home on Wellington Avenue for a reading of Sarah Ruhl’s wonderfully funny and provocative In the Next Room, or the vibrator play), and we look forward to fostering an invigorating conversation.”

ABOUT THE CHICAGO INCLUSION PROJECT
Founded by Actor/Casting Director Emjoy Gavino, The Chicago Inclusion Project is a collective of artists, committed to creating inclusive theater experiences by bringing together Chicago artists and audiences normally separated by ethnic background, economic status, gender identity, physical ability and countless other barriers. By deliberately choosing the unexpected, both in play choices and non-traditional casting, cultivating a diverse audience by bringing new combinations of artists to as many communities in Chicago (and it surrounding suburbs) as possible, choosing facilities for the multiple projects that are handicap accessible and keeping price of tickets affordable, The Chicago Inclusion Project programming aims to unite diverse collections of Chicagoans.

ABOUT TIMELINE THEATRE
TimeLine Theatre Company, recipient of the prestigious 2016 MacArthur Award for Creative and Effective Institutions, was founded in April 1997 with a mission to present stories inspired by history that connect with today's social and political issues. To date over 19 seasons, TimeLine has presented 67 productions, including nine world premieres and 27 Chicago premieres, and launched the Living History Education Program, now in its ninth year of bringing the company's mission to life for students in Chicago Public Schools. Recipient of the Alford-Axelson Award for Nonprofit Managerial Excellence and the Richard Goodman Strategic Planning Award from the Association for Strategic Planning, TimeLine has received 52 Jeff Awards, including an award for Outstanding Production 11 times.

LAST CALL: Don't miss this. Chimerica is highly recommended and a favorite of ours here at ChiIL Live Shows. Even the lobby is uber impressive and interactive. And the show is thought provoking to say the least!

Now playing at TimeLine is the Chicago premiere of Lucy Kirkwood’s acclaimed Chimerica, directed by Associate Artistic Director Nick Bowling. Twenty years after the iconic image of one man standing alone in front of a military tank in Tiananmen Square captivated the world, a photojournalist searches for the truth about that mysterious “Tank Man” in an epic, global adventure that explores the complex relationship between China and the United States. Chimerica, winner of the 2014 Laurence Olivier Award for Best New Play, runs through July 31, 2016.

ABOUT THE LEAGUE OF CHICAGO THEATRES