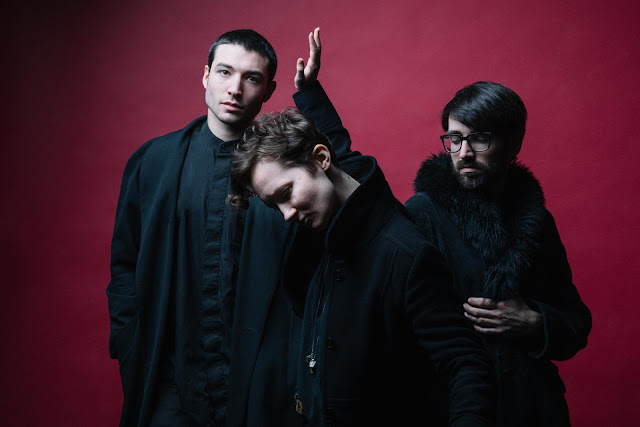 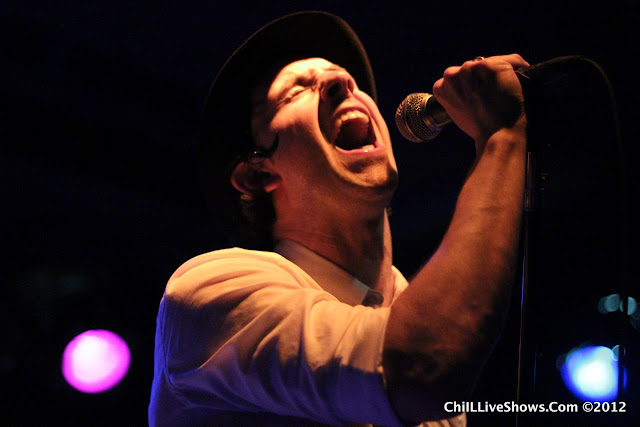 ChiIL Live Shows just had the great pleasure of catching Maximo Park's Chi-town show.   Despite being booked for the Monday after 3 raucous days of Riot Fest, in a torrential downpour, they played to a packed house at Schubas.    This is one of the strongest shows we've seen recently in an intimate venue. 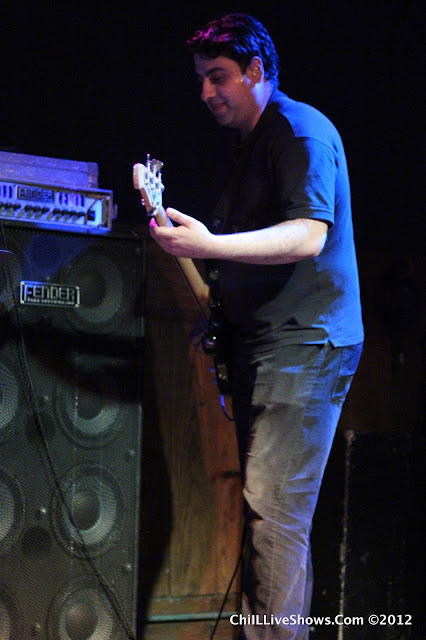 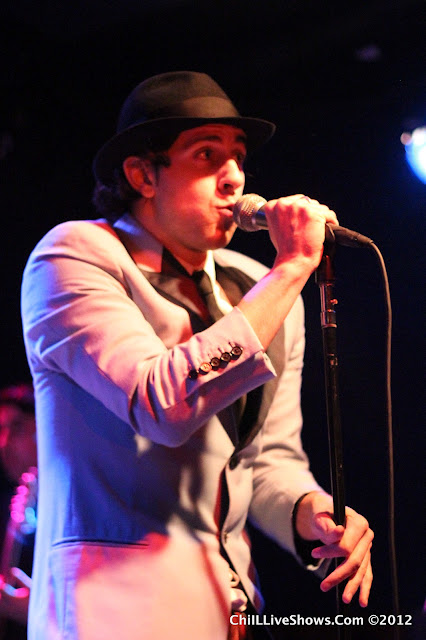 They have a compelling, original sound with a heavier, edgier Joe Jackson tinge.   Lead singer, Paul Smith's witty and literate banter between songs had the audience cracking up.   Their lyrics are insightful and genuine and their danceable riffs are impossible to resist.   Couple that with intensity, talent and stage presence, and you've got a winning combination.   Maximo Park is one to watch. 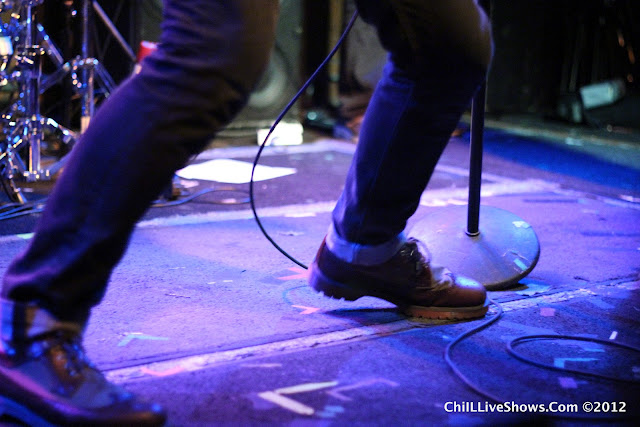 Check back with ChiIL Live Shows like we vote in Chi, IL...early and often.   We'll have a full review of The National Health up in the very near
future. 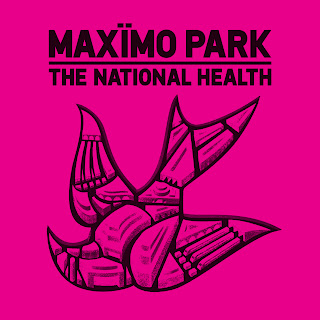 "The album’s title track [The National Health] is the sort of runaway jittery guitar anthem that we’re not getting quite so often from the UK’s postpunkrevivalists anymore."  --- STEREOGUM 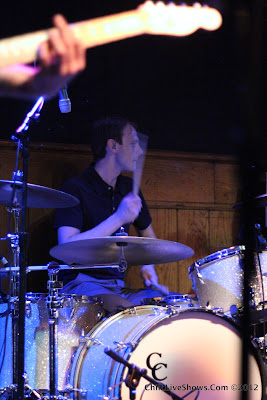 "Maxïmo Park have always been best at their fastest, when they sprint through verses into choruses and back out again just as quickly. That's thanks mostly to singer Paul Smith, who has a unique ability to slip into controlled mania like a jockey cracking a whip.”  --- PITCHFORK 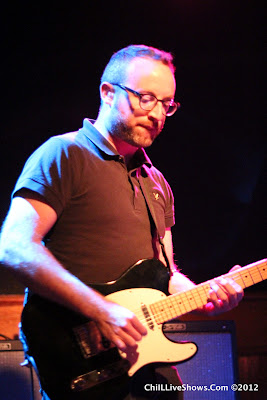 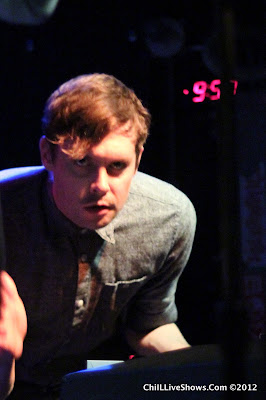 "Maximo Park are back with their quintessential furiously fast-paced indie rock – and it’s great."
--- MUSO'S GUIDE

Straight To The Sun Records celebrate Maximo Park's first USA tour in over 5 years and the release of their brand new album “The National Health” on 8.28.12. 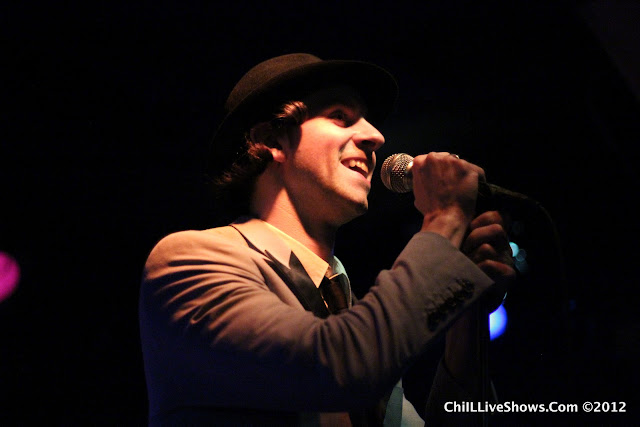 Their videos are truly creative works of art.   Check out their humorous new video featuring the concept of a crazed, obsessed fan, set to their addictive and endearing new song, "Hips and Lips".

Posted by Bonnie Kenaz-Mara at 9:50 AM No comments:

Watch John Darnielle of the Mountain Goats perform on Pitchfork.tv and WNYC's Soundcheck

The Mountain Goats are set to release their new album Transcendental Youth on October 2nd via Merge Records. The album can be streamed now exclusively via Rolling Stone. John Darnielle of the Mountain Goats recently filmed performances of "Harlem Roulette"off Transcendental Youth along the New York City waterfront for Pitchfork.tv and WNYC's Souncheck where he performed: "In Memory of Satan", "White Cedar", "Counterfeit Florida Plates" off the new album, along with "Thank You Mario, But Our Princess Is In Another Castle".

In addition, the Mountain Goats announce the second leg of their U.S. tour that takes the band across the southern U.S. and along the west coast. Matthew E. White, who wrote the horn arrangements for the band’s forthcoming release, Transcendental Youth will continue on as the opener for this 2nd leg of dates. Matthew E. White, described by Stereogum as "bring[ing] together the warm, haunted tones of Leonard Cohen, Terry Riley, and Dr. John," will be performing his debut album Big Inner with a 9-piece band; his horn section, in this special tour engagement, will join in the Mountain Goats’ set. John Darnielle writes of the collaboration: "One of my fondest memories of the Transcendental Youth recording sessions is listening in the control room as Matthew and his players brought his horn arrangements to life on the other side of the glass. Me and Peter and Jon just sat there with our jaws on the floor. We can't wait to hear it come together live."

Before the tour kicks off, the Mountain Goats will perform the program Transcendental Youth with the world-renowned vocal quartet,Anonymous 4, on October 6th in Durham, NC. Five songs from Transcendental Youth, in special vocal arrangements by Owen Pallett,  serve as the hub of the program, which also spans the catalog of both the Mountain Goats and Anonymous 4. The program was performed earlier this year at the Ecstatic Music Festival in New York City and at The Barbican in London. Tour dates are as follows:

As John Hodgman writes in the bio for the new record: "John Darnielle has written almost 600 songs now, and some of them are very sad, dealing with hard drugs and tragic ends, hurting yourself and others, sicknesses of both body and brain, off-brand alcohols. They are told in beautiful, unnerving, specific detail because he is a very good writer, and also some of them are just true stories about his own life. These are the consolations; and if some of his songs suggest that there are real hells on earth, other songs remind that the heavens are equally close at hand. (Sometimes they are even the same songs.) It is my impression that this is the ecstasy John Darnielle is feeling: that thrill of having survived, escaped for even a second to enjoy those small transcendent delights, and to sing of them.  Transcendental Youth is full of songs about people who madly, stupidly, blessedly won’t stop surviving, no matter who gives up on them." John Darnielle has been called "America's best non-hip-hop lyricist” by the New Yorker and last year was tagged on the cover as SPIN Magazine as, "Indie Rock's Greatest Lyricist".


Posted by Bonnie Kenaz-Mara at 1:11 PM No comments:

Posted by Bonnie Kenaz-Mara at 5:17 PM No comments:

Posted by Bonnie Kenaz-Mara at 3:42 PM No comments: