ACT OUT: OTHER PEOPLE’S MONEY at Chicago’s Theater Wit Through Oct 19th

Shattered Globe Theatre is pleased to kick-off its 2013-14 season with OTHER PEOPLE’S MONEY by Jerry Sterner, directed by Dennis Zacek, now playing through October 19, 2013 in its new artistic home as a resident theatre company at Chicago’s Theater Wit, 1229 W. Belmont Ave. in Chicago. Tickets are available at www.theaterwit.org , in person at the Theater Wit Box Office or by calling (773) 975-8150.  The press performance is Sunday, September 8 at 3 pm. 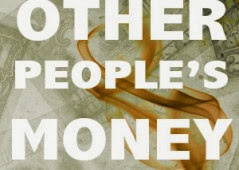 OTHER PEOPLE’S MONEY delves into the seedy and deceptive world of business, as a small company faces a hostile takeover at the hands of a ruthless businessman. Slimy, immoral and strangely likable, “takeover artist” Lawrence Garfinkle will stop at nothing to gain control of New England Wire and Cable. Equal parts corporate critique and romantic comedy, OTHER PEOPLE’S MONEY mines the manipulation, greed and unexpected humanity in the world of business.  “Other People’s Money is still up to the minute,” comments director Dennis Zacek. “We can see the effects of corporate greed trickle into every facet of our lives.”

About the Playwright:
Jerry Sterner was an American businessman-turned-playwright whose plays include Tit for Tat, Be Happy for Me, the musical Top 40 with Jerry Bock, and his biggest success, Other People’s Money. That show opened in New York in 1989 to much acclaim and ran for years. In 1991, Norman Jewison directed a film version of Other People’s Money starring Danny DeVito and Gregory Peck.

About the Director:
Dennis Zacek is the Artistic Director Emeritus of Victory Gardens Theatre and has directed over 250 productions in his career. In recent years, he directed the world premiere of James Sherman's Jacob and Jack; the Chicago premiere of Blackbird by David Harrower; the world premiere of Jeffrey Sweet's Class Dismissed; James Sherman's Relatively Close; the Midwest premiere of A Park in Our House by Nilo Cruz; the world premieres of Cynical Weathers by Douglas Post; Denmark by Charles Smith, the inaugural production at Victory Gardens' new home at the Biograph; Symmetry by David Field; The Family Gold by Annie Reiner; Affluenza! and The Old Man's Friend by James Sherman; Unspoken Prayers by Claudia Allen; and The Action Against Sol Schumann and Flyovers by Jeffrey Sweet.  Zacek, along with Marcelle McVay and Sandy Shinner, accepted the 2001 Regional Theater Tony Award for Victory Gardens Other honors include the Actors' Equity Association's (AEA) Spirit of Diversity Award, the Jeff Award for Outstanding Achievement in Chicago Equity Theatre and the Artistic Leadership Award from the League of Chicago Theatres.  He is also Full Professor Emeritus at Loyola University.

Shattered Globe Theatre was born in a storefront space on Halsted Street 21 years ago. Since then, SGT has produced more than 60 plays, including 9 American and World premieres, and garnered an impressive 42 Jeff Awards and 97 Jeff Award Nominations as well as the acclaim of critics and audiences alike. Shattered Globe presents an eclectic mix of plays, intimate character driven selections, which speak to the universal aspect of what it means to be a part of the human experience.

For more information on Shattered Globe Theatre, please visit www.shatteredglobe.org .
Posted by Bonnie Kenaz-Mara at 9:52 AM No comments: