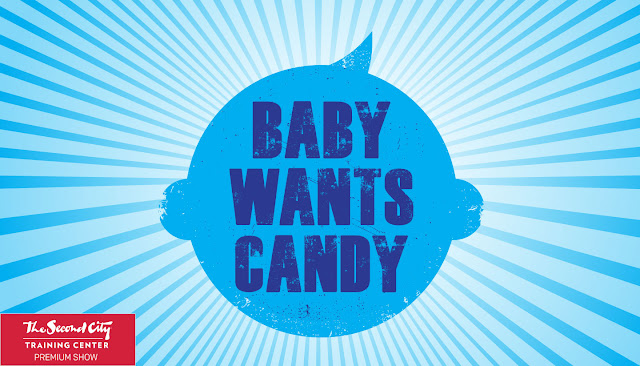 “Baby Wants Candy,” has long been a favorite of ours here at ChiIL Live Shows. I came from an improv background, studying it in high school and college in the 80's and forming my own nationally award winning troupe at Miami University in Oxford, Ohio. They lasted over 20 years. I've always had a soft spot for imrov done well, and Baby Wants Candy delivers. This talented troupe not only takes audience suggestions for dialogue and show theme, but they put on a full on musical with a live band! You've got to see it to believe it.

Chicago’s celebrated comedy institution will be spending the winter at Judy’s Beat Lounge at The Second City Training Center (230 W. North Ave) for a limited run, starting January 7 and running through March 25, 2017. After beginning at Improv Olympic and moving to the Apollo Theater in 2005, the “truly amazing” (New York Times) and “consistently funny and crowd pleasing” (Chicago Sun-Times) improvised musical will now perform every Saturday at 9 p.m. at the Training Center’s intimate 60-seat theater. Featuring a full band, each performance comes to life with a call-out by the audience resulting in a 60-minute, fully-improvised musical by some of Chicago’s finest improvisers. Tickets to “Baby Wants Candy” ($15/general admission; $7/students) are on sale now and can be purchased by visiting SecondCity.com.

“We are incredibly enthused to partner with the team at The Second City Training Center to bring our show to a whole new audience” said “Baby Wants Candy” Producer Emily Dorezas. “Since the recent election has created a lot of headlines, we expect to get some very interesting and topical titles for our signature improvised musicals.”

Each “Baby Wants Candy” performance begins with the cast asking the audience for a suggestion of a musical that has never been performed before. In that moment, accompanied by a full band, the first title that the group hears becomes the title and theme for that evening’s improvised musical, featuring a roller coaster ride of spontaneously choreographed dance numbers, rhyming verses and improvised comedy.  Each performance is its own opening and closing night, and by design every show is completely unique and a once–in a lifetime premiere.

“The Training Center is really looking to add more prestigious groups to our programming, and 'Baby Wants Candy' fits that bill perfectly,” said The Second City Training Center producer Stephanie Case. “We think that our students, faculty, and community will be very excited to have this show in our building.”

About Baby Wants Candy
“Baby Wants Candy” has received rave reviews in The New York Times, The Huffington Post, The Onion, Chicago Sun-Times, TimeOut New York and more, and has received numerous awards including the winner of FringeNYC’s Outstanding Unique Theatrical Experience, Best Improv Ensemble by Chicago Magazine, the Best Visiting Comedy Ensemble by TimeOut New York, the recipient of the Ensemble of the Year Award at the Chicago Improv Festival, and a rare Sixth Star Award at the Edinburgh Fringe Festival.

The producing team behind “Baby Wants Candy” debuted “50 Shades! The Musical Parody” in 2012, playing to sold-out crowds off-Broadway, nationally and internationally. “50 Shades” currently runs in Las Vegas and Japan, and has been translated into more than 12 languages. In 2015, Baby Wants Candy also produced “Thrones! The Musical Parody,” opening to sold-out performances at the Edinburgh Fringe Festival, followed by a twice-extended run at the Apollo Theater in Chicago as well as the Hudson Theater in Los Angeles. After previews in Los Angeles last spring, “Baby Wants Candy” brings “Shamilton,” the newest improvised musical based on the Broadway smash hit, to Apollo Theater running January 20 – March 31, 2017.
Posted by Bonnie Kenaz-Mara at 10:01 AM No comments: