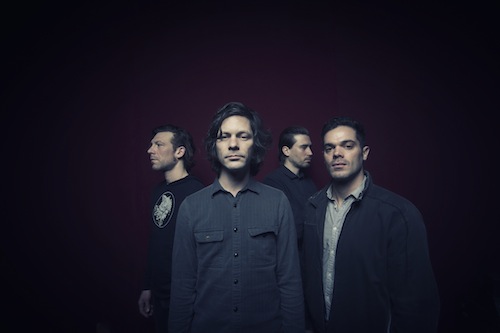 ChiIL Live Shows will be there tonight... will YOU?!   We first discovered Disappears by accident at Lollapalooza.   Enroute to some other act we came to a screeching halt as soon as we heard them and stayed the whole set!   While we were there a bunch of other wanderers kept getting sucked in and asking "Who is that band?!"   Since then we've been stalking them around Chi-town and enjoying their rise.

Check back like we vote in Chi, IL... early and often.   We'll have Lincoln Hall show shots up shortly.   And if you're 21+ get out and see them LIVE at Lincoln Hall tonight.

Disappears will be bringing their high intensity live show and swirling brand of drone-y psych rock to Chicago TONIGHT, Thursday, April 18th at Lincoln Hall.  The repetitive, pummeling beat that snakes through their newest EP, Kone, highlights the band's post-punk, experimental guitar-driven style and elevates the sound to the next level.

The Quietus describe the fervency of the title track, "Kone (Edit)" as "echoed howls over a circular, sparse post-punk core, one which feels like it's barely keeping a torrent of motorik fury at bay. As the track closes, the dissonant noise rears up again, only this time its a controlled feedback-storm, eventually coming into its own as the other instruments fall out, leaving it hanging there, a quivering, metallic spectre."

Kone will be out April 20th with new material to follow later this year, but for now, check out Disappears in person for a night of fierce electricity.

Check out the Disappears hypnotic and melodic video for the title and main track "Kone (Edit)" from their forthcoming EP to be released April 20th.

Watch The Video on Self-Titled Magazine

"Kone (Edit)" was recently premiere on UK site The Quietus, who call the ten minute epic an "incantatory, long-form cut, and one that promises big things from the band's next album," with a surging "torrent of motorik fury" that gets leveled out towards the end as the "dissonant noise rears up again, only this time its a controlled feedback-storm, eventually coming into its own as the other instruments fall out, leaving it hanging there, a quivering, metallic spectre."
Disappears, known for their mesmerizing and electric live shows are about to hit the road for a run of US dates, be sure to catch them. All dates are listed below.

Posted by Bonnie Kenaz-Mara at 7:30 PM No comments: