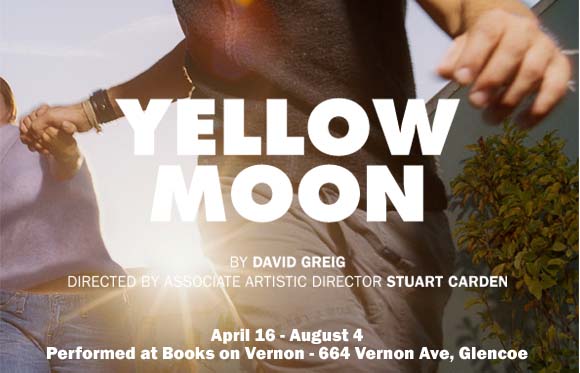 This is the ballad of Leila and Lee—a modern-day Bonnie and Clyde who learn that they aren’t alone in the world the night that they discover each other. Their wild ramble across the Scottish highlands in search of an absent father is told in a series of lyrical narratives that will immerse audiences in the action, forging a breathless drama of beauty in the darkness.

TICKET INFORMATION
Performances are April 16, 2013 – August 4, 2013. The press openings are Wednesday, April 24, 2013 at 7:30 and Thursday, April 25, 2013 at 7:30pm. Curtain times are Tuesdays and Wednesdays at 7:30pm (with select Wednesday 2pm matinees – May 22 & 29, June 5, and July 3 & 24); Thursdays and Fridays at 8:00pm; Saturdays at 4:00pm and 8:00 pm; Sundays at 2:00pm and 6:00pm.  Tickets are $35-$60 and are available at the Box Office, 376 Park Avenue, Glencoe; 847-242-6000 or online at www.writerstheatre.org.
AUDIENCE ENRICHMENT
Writers’ Theatre is thrilled to announce the expansion of their post-show discussions. Throughout the season they will be offering post-show discussions on select Wednesday evenings following the performance in our Tudor Court space. In the Books on Vernon space they will be offering post-show discussions every other Wednesday evening.
Post-show discussions provide a forum for audience members to ask questions of the artists in the production and gain new insight into the work.
Post-show discussions for Yellow Moon are every Wednesday evening following the performance: May 8, 22; June 5, 19; and July 3, 17, 31.
Visit writerstheatre.org/enrichment for more information.
TWEET SEATS
Follow Writers' Theatre on Twitter (Twitter.com/WritersTheatre) and by 3:00pm, when available, Writers' will Tweet a code that can be used to purchase remaining seats for that day’s performance at a discount. When available, Tweet Seats may be purchased only through the Writers' Theatre website atwriterstheatre.org.

WRITERS’ PARTNERS
Writers' Theatre is pleased to welcome back BMO Harris Bank as Season Sponsor of its 2012/13 Season. The Season Sponsor is Mary Winton Green and the Major Production Sponsor for Yellow Moon is Mary Pat Studdert. The Corporate Sponsor Partner is Consolidated Electronic Wire & Cable.
Writers' Theatre welcomes back Winnetka’s award-winning Restaurant Michael as Restaurant Partner and Event Sponsor. Writers' Theatre patrons receive 10% off their guest check when they present their ticket stub when ordering. Just 10 minutes from the theater at 64 Green Bay Road, Restaurant Michael is the perfect fit for any dining occasion. Call 847-441-3100 to make your reservation.
For more information about Writers' 2012/13 Season Restaurant Partners and offer restrictions visit writerstheatre.org/visitus.

ABOUT WRITERS’ THEATRE
Over the past twenty seasons, Writers' Theatre has become a major Chicagoland cultural destination with a national reputation for excellence. Under the artistic leadership of Michael Halberstam and the executive leadership of Kathryn M. Lipuma, Writers’ Theatre has been deemed the “best drama company in the nation” by the Wall Street Journal and achieved twenty years of surplus operations. The company, which plays to a sold-out and discerning audience of 35,000 patrons each season, has garnered critical praise for the consistent high quality and intimacy of its artistry. Prized for the finest interpretations of classic and contemporary theatre in its two intensely intimate venues, Writers’ Theatre’s acclaimed work includes Artistic Director Michael Halberstam’s world premiere in Glencoe and subsequent production of A Minister’s Wife at Lincoln Center Theater; David Cromer’s productions of A Streetcar Named Desire and Picnic; and the commissioning, world premiere and New York premiere of Crime and Punishment, which has received more than 30 subsequent regional theater productions.
In July, 2011, Writers’ Theatre announced the hiring of the award-winning, internationally renowned Studio Gang Architects, led by principle Jeanne Gang, FAIA to design a new home for the Theatre in downtown Glencoe which will once again allow the Theatre to grow to accommodate its audience, while maintaining its trademark intimacy. The new facility will resonate with and complement the Theatre’s neighboring Glencoe community and will add tremendous value to Chicagoland and the North Shore as a premier cultural destination.
You can find Writers’ Theatre on Facebook or follow Writers' Theatre on Twitter at Twitter.com/WritersTheatre. For more information, visitwww.writerstheatre.org.
Title:                 Yellow Moon
Written by:        David Greig
Directed by:      Stuart Carden
Featuring:         Karen Janes Woditsch (Jenni/Holly), Josh Salt (Lee),
Ashleigh Lathrop (Leila) and John Lister (Billy/Frank).
Dates:              First performance: April 16, 2013

Posted by Bonnie Kenaz-Mara at 1:15 PM No comments: