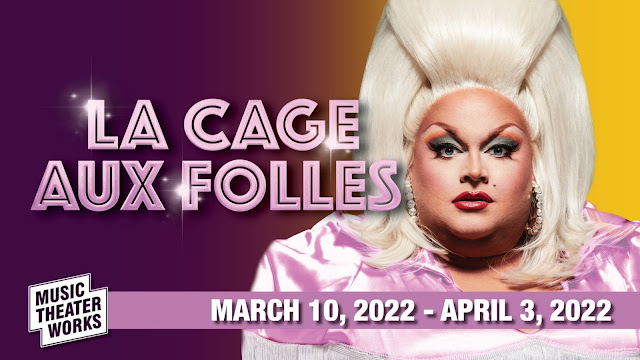 AT THE NORTH SHORE CENTER FOR THE PERFORMING ARTS

Tickets Now on Sale for the Spring 2022 Production that is so Much Fun, it will be Hard to Keep Anything Straight, Directed by Producing Artistic Director Kyle Dougan+/^ and Music Directed by Kyra Leigh*, Choreography by Christopher Chase Carter+ and Costumes by “Project Runway’s” Justin LeBlanc+

Music Theater Works is proud to announce the cast for its spring production of the Tony-Award winning La Cage Aux Folles,  music and lyrics by Jerry Herman+, book by Harvey Fierstein+, directed by Producing Artistic Director Kyle Dougan+/^ and music directed by Kyra Leigh* with choreography by Christopher Chase Carter+. La Cage Aux Folles performance schedule includes a preview performance Thursday, March 10 at 1 p.m. with press opening Friday, March 11 at 8 p.m. The running time is currently two hours and 40 minutes including one 15-minute intermission. The performance schedule is Wednesdays at 1 p.m., Fridays at 8 p.m. Saturdays at 2 and 8 p.m. and Sundays at 2 p.m. Tickets are now on sale at $19.50 - $106 with Meet and Greet with Ginger Minj options and discounted 2022 subscriptions at MusicTheaterWorks.com.

The winner of six Tony Awards including Best Musical, Best Score, Best Book and Best Revival of a Musical, La Cage Aux Folles is a night full of belly-laughs. Based on the hit French farce that also inspired West End and international productions and Hollywood’s “The Birdcage,” this Broadway smash has a hilarious book by Harvey Fierstein (Torch Song Trilogy and Kinky Boots) and a score by the king of show tunes, Jerry Herman (Hello, Dolly! and Mame).  With “RuPaul’s Drag Race” headliner, Ginger Minj*, as “Albin” and costumes by “Project Runway” designer Justin LeBlanc+, The Music Theater Works rendition of this classic is guaranteed to be one of the most entertaining productions of the year. The theatre will be transformed into La Cage’s elegant St. Tropez nightclub complete with an onstage bar and surprises at every turn. And when a non-traditional family’s future in-laws come for a visit, La Cage shines the spotlight on family, love, commitment and drag as the truth comes out in the wildest of ways. 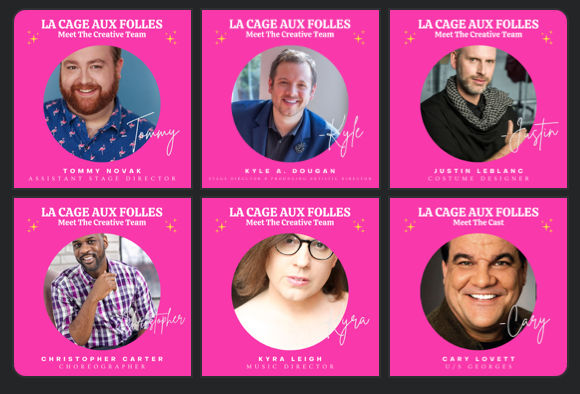 ALL GUESTS will be required to wear a face mask regardless of vaccination status and to present their photo ID with proof of full vaccination from COVID-19 with an approved vaccine.

Long before she held court as a finalist on season 7 of “RuPaul’s Drag Race,” Ginger Minj reigned as The Comedy Queen of The South from her homebase in Orlando, Florida. The self-professed “nicest bitch you’ll ever meet” cites classic funny ladies Carol Burnett, Lucille Ball and Dolly Parton as her idols. “Anyone who can pile three wigs on their head, squeeze their body into a beaded and rhinestoned gown and serve humor alongside the glamour is my hero,” says Minj. That’s why she coined the term “Glamour Toad'' to describe her unique persona.

In 2016, Ginger released her debut album, “Sweet Tea,” which was soon followed by years spent touring the world and performing showtunes for Broadway royalty on national television. With more than 200,000 global streams, Ginger Minj went on to star in the 2018 Netflix feature film, “Dumplin’” (Jennifer Anniston, Dove Cameron) and in June 2021 released her sophomore album “Gummy Bear,” which peaked at #2 on the iTunes Comedy Album Charts. She then followed up in September 2021 with her third studio album, “Double Wide Diva,” which peaked at #10 on the iTunes Country Album Charts.

Ginger Minj was a finalist of Season 6 of “RuPaul’s Drag Race All Stars” and is continuously working on exciting projects to come in 2022 including a new book entitled “Southern Fried Sass” which tells her life story through stories and family recipes.

Kyle Dougan worked as casting associate and events manager for Music Theater Works, and rejoined the company in 2018 as Producing Artistic Director Designate, following a two-year stint in academia. He relocated to Chicago in 1999, after completing his Masters in Musical Theatre at Goldsmiths, University of London, where he produced and directed a workshop of new musicals. He also stage managed a series of new musicals with Perfect Pitch: New Musicals at Trafalgar Studios. In the Chicago area Kyle has directed, associate-directed and assistant-directed shows for Chamber Opera Chicago, Theatre at the Center, Big Noise Theater and The Music Theatre Company. He has served as artistic producer of a series of new musicals with Midwest New Musicals, as executive director of FWD Theatre Project and as co-owner of Style Theatrical Casting, a professional casting company in Chicago.

Christopher Chase Carter is the artistic director of Mercury Theater Chicago. Before moving to Chicago, Carter studied in Michigan, where he began his theater career performing, directing and choreographing award-winning community and college productions. He attended Grand Valley State University achieving his bachelor of arts while on scholarship. After graduating, Carter became an active participant in the Chicago dance and theater community. In 2019, he directed and choreographed the pilot production of “Scottsboro Boys'' working closely with Musical Theater International (MTI) and Susan Stroman at the International Thespian Festival. He followed that up by directing a history-making production of “Legally Blonde” at Northwestern University. He has been honored with many scholarships throughout his career. In 2005, he moved to Los Angeles where he was awarded a scholarship to the Debbie Allen Dance Academy. After training at DADA, he returned to Michigan to finish his degree. He was one of four dancers chosen for a scholarship to study abroad in Kingston, Jamaica to further his training and education at The Edna Manley School. After graduating, this inspired Cater to start his own scholarship, The Christopher Carter Arts Scholarship, to help underprivileged artists pursue their dreams. With a true passion for creativity and art, Carter is excited about the future of theater and looks forward to being part of the evolution of performance and artistry.

Music Theater Works is a resident professional not-for-profit music theater founded in 1980. During its 40-year history it has presented more than 150 productions and intimate presentations. Music Theater Works is a professional theater company whose mission is to present works for the musical stage including historic repertoire, revitalizing the Golden Age of Broadway and earlier works, celebrating the Great American Songbook and introducing modern classics. The company uses collaborations among theaters, other artistic disciplines, social service agencies, local business, educational institutions and others to create music theater for the 21st century.

Audiences know that at Music Theater Works they will experience musical theater, which is often unavailable on the stages of commercial theaters and opera houses, in beautiful, colorful modern productions with professional artists and live orchestra.

Music Theater Works is proud to announce the cast for its spring production of the Tony-Award winning La Cage Aux Folles,  music and lyrics by Jerry Herman+, book by Harvey Fierstein+, directed by Producing Artistic Director Kyle Dougan+/^ and music directed by Kyra Leigh* with choreography by Christopher Chase Carter+. La Cage Aux Folles performance schedule includes a preview performance Thursday, March 10 at 1 p.m. with press opening Friday, March 11 at 8 p.m. The running time is currently two hours and 40 minutes including one 15-minute intermission. The performance schedule is Wednesdays at 1 p.m., Fridays at 8 p.m. Saturdays at 2 and 8 p.m. and Sundays at 2 p.m. Tickets are now on sale at $19.50 - $106 with Meet and Greet with Ginger Minj options and discounted 2022 subscriptions at MusicTheaterWorks.com.

Posted by Bonnie Kenaz-Mara at 11:42 AM No comments: