Extended By Popular Demand Through January 7! 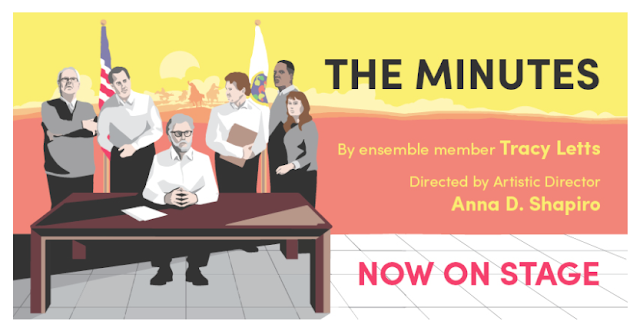 Tickets to the extension ($20-$105) go on sale Friday, November 24 at 1pm through Audience Services at 312-335-1650 or steppenwolf.org. Classic and Flex Memberships are still available and offer discounted prices and flexibility; more information at steppenwolf.org/memberships.

Tracy Letts, the writer of Linda Vista and August: Osage County, debuts a scathing new comedy about small-town politics and real-world power that exposes the ugliness behind some of our most closely-held American narratives while asking each of us what we would do to keep from becoming history’s losers.

"The Minutes explores how we define history and the stories that we tell ourselves. Many of our ensemble members have returned to dig into Tracy's funny and surprising new work. Being in the Steppenwolf rehearsal room is one of my favorite places to be, and surrounded by the incredible cast and so many ensemble members—it's simply the best environment a director could ask for," shares Artistic Director Anna D. Shapiro.

This play marks the fifth collaboration between Anna D. Shapiro and Tracy Letts and the seventh play by Letts to premiere at Steppenwolf. This season is also the 10th anniversary of the internationally acclaimed production of Steppenwolf’s August: Osage County by Letts and directed by Shapiro, which also featured ensemble members Ian Barford, Francis Guinan and Sally Murphy who all reunite for The Minutes.

Anna D. Shapiro is a Tony Award-winning director and Artistic Director of Steppenwolf. She has directed several notable productions at Steppenwolf, including Visiting Edna, Mary Page Marlowe, August: Osage County (2008 Tony, Drama Desk and Outer Critics Circle Awards), Man from Nebraska, Tracy Letts’s adaptation of Three Sisters, and The Motherf**ker with the Hat (also on Broadway, 2011 Tony nomination for Best Director). Broadway credits include Larry David’s Fish in the Dark, Of Mice and Men and the revival of Steppenwolf’s This Is Our Youth.

About the Cast & Creative Team
Ensemble member Kevin Anderson last performed at Steppenwolf in Lisa D’Amour’s Detroit in 2010 and on Broadway in Come Back Little Sheba; Ian Barford most recently starred in Steppenwolf’s world premiere of Linda Vista and Visiting Edna in the 2016/17 season, and he originated the role of Little Charles in August: Osage County; ensemble member Francis Guinan has appeared in more than 30 Steppenwolf shows, most recently in this season’s The Rembrandt; ensemble member James Vincent Meredith most recently performed in 2015’s Between Riverside and Crazy and in a highly lauded production of Othello at the Chicago Shakespeare Theater; ensemble member Sally Murphy was most recently seen in Visiting Edna and Linda Vista and was nominated in 2015 for the Lucille Lortel Award for Outstanding Lead Actress in a Musical for her performance in Three Penny Opera; and ensemble member William Petersen was last seen onstage in both Steppenwolf’s and The Geffen Playhouse’s productions of Slow Girl (2013) and is well known for his Emmy Award-winning performance as Gil Grissom in the CBS drama series CSI: Crime Scene Investigation, for which he won a Screen Actors Guild Award and was nominated for a Golden Globe Award.

Brittany Burch is a graduate of the School at Steppenwolf and an ensemble member of the Gift Theatre. This will be Cliff Chamberlain’s 10th production at Steppenwolf, where he was most recently seen in The Herd. Danny McCarthy was in Steppenwolf’s acclaimed production of The Flick and is featured in Lionsgate Films, STRONGER alongside Jake Gyllenhaal. Jeff Still recently starred in the Tony Award-winning Oslo on Broadway. Penny Slusher is well known for her Chicago and regional theatre credits and was in Steppenwolf’s Australian production of August: Osage County.

Group Tickets: all groups of 10 or more receive a discounted rate for any performance throughout the season; steppenwolf.org/groups.
Classic Subscription Memberships offer 7-Play Packages securing dates and seats for the full Steppenwolf experience, as well as Create-Your-Own Packages with 5 or 6 plays. Perks include discount prices, easy and free exchanges and more.

Black Card Memberships are for audiences interested in extreme flexibility with six tickets for use any time for any production. Black Card ticket credits are valid for one year with the option to add additional tickets as needed. Perks include easy and free exchanges, access to seats before the general public, savings on single ticket prices and bar and restaurant discounts for pre- and post-show socializing.

**Night Out Gift Card** Perfect for both personal and business gifting, it’s easy to warm hearts with the gift of theatre. Night Out Gift Card includes two flexible ticket credits to any Steppenwolf performance and $25 Front Bar gift card for only $179. Limited time offer through January 6, 2018. steppenwolf.org/holiday.

Visitor Information & Accessibility
Steppenwolf is located at 1650 N Halsted St near all forms of public transportation and is wheelchair accessible. The parking facility consists of both a covered garage ($12 cash or card) and an open-air lot, located at 1624 N Halsted. Valet parking service ($14 cash) is available directly in front of the main entrance at 1650 N Halsted St starting at 5pm on weeknights, 1pm on weekends and at 12noon before Wednesday matinees. Street and lot parking are also available. For last minute questions and concerns, patrons can call the Steppenwolf Parking Hotline at 312.335.1774.

Committed to making the Steppenwolf experience accessible to everyone, performances featuring American Sign Language interpretation, open captioning and audio description are offered during the run of each play. Assistive listening devices and large-print programs are available for every performance. There is an induction hearing loop in both the main and balcony levels of the Downstairs Theatre and 1700 Theatre.

Front Bar: Coffee and Drinks
Connected to the main lobby is Steppenwolf’s own Front Bar: Coffee and Drinks offering a welcoming, creative space to grab a drink, have a bite, or meet up with friends and collaborators, day or night. Open Tuesday – Sunday from 8am to midnight, Front Bar serves artisanal coffee and espresso by La Colombe with food prepared by Goddess and Grocer. The menu focuses on fresh, accessible fare, featuring grab-and-go salads and sandwiches for lunch and adding shareable small plates and desserts for evening and post-show service. www.front-bar.com

Sponsor Information
ComEd is the sponsor of The Minutes. United Airlines is the Exclusive Airline of Steppenwolf and ComEd is the Official Lighting Sponsor for the 17/18 season.

Steppenwolf Theatre Company is the nation’s premier ensemble theater. Formed by a collective of actors in 1976, the ensemble of 49 members represent a remarkable cross-section of actors, directors and playwrights. Thrilling and powerful productions from Balm in Gilead to August: Osage County—and accolades that include the National Medal of Arts and 12 Tony Awards—have made the theater legendary. Steppenwolf produces hundreds of performances and events annually in its three spaces: the 515-seat Downstairs Theatre, the 299-seat Upstairs Theatre and the 80-seat 1700 Theatre. Artistic programing includes a seven-play season; a two-play Steppenwolf for Young Adults season; Visiting Company engagements; and LookOut, a multi-genre performances series. Education initiatives include the nationally recognized work of Steppenwolf Education, which engages 15,000 participants annually from Chicago’s diverse communities; the esteemed School at Steppenwolf for actors; and Professional Leadership Programs for arts administration and production training. While firmly grounded in the Chicago community, nearly 40 original Steppenwolf productions have enjoyed success both nationally and internationally, including Broadway, Off-Broadway, London, Sydney, Galway and Dublin. Anna D. Shapiro is the Artistic Director and David Schmitz is the Executive Director. Eric Lefkofsky is Chair of Steppenwolf’s Board of Trustees. For additional information, visit steppenwolf.org, facebook.com/steppenwolftheatre, twitter.com/steppenwolfthtr and instagram.com/steppenwolfthtr.

Posted by Bonnie Kenaz-Mara at 3:35 PM No comments: