ACT OUT EXTENDED: The Beautiful Dark at Red Twist Extends to Sept 8

ACT OUT OPENING: World Premiere of The Beautiful Dark at Redtwist Theatre

How do you stop a violent mind?
What should parents do when it may seem that their son is planning a violent act--and the boy has become nearly incommunicado?

PLAY
Nancy's son, Jacob, announces he has failed out of college, and upon returning home, sleeps all day. From this deceitful calm, Nancy makes a startling discovery: Jacob didn't flunk out; he was kicked out for writing a graphic play about a killing spree on campus, carried out by a young man who sounds eerily like her son.As the evidence mounts against Jacob, Nancy is forced to confront her darkest fears. Is her son capable of the unthinkable? And can she stop him before it's too late?

PLAY HISTORY
Erik Gernand began writing The Beautiful Dark the week after the shooting in Arizona that injured Congresswoman Gabrielle Giffords. He was inspired by an editorial he read in defense of the parents of the shooter that posed the question: What would you have done if he were your child?

A number of theaters have worked with the script.
The Beautiful Dark has also received the following:
PLAYWRIGHT ERIK GERNAND
The Beautiful Dark is Erik's first production with Redtwist Theatre, and will open in September at Premiere Stages in Union, NJ. His plays have been in development or production at American Theater Company, Actors Theatre of Louisville, The Barrow Group (NY), and Chicago Dramatists. Erik's short films have screened at more than 100 film festivals around the world including SXSW, Cinequest, and Chicago International Film Festival, as well as been broadcast on IFC, PBS, and The Logo Channel. He is a lecturer in Radio-TV-Film at Northwestern University. 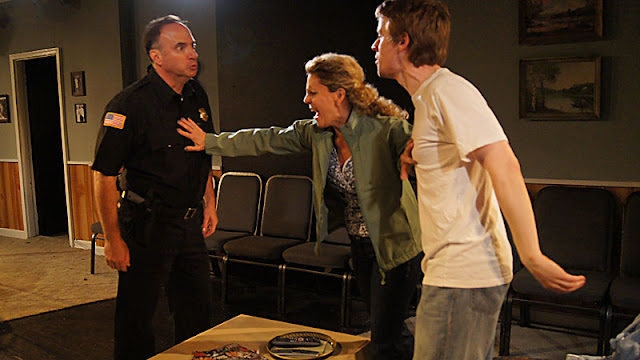 
Please reserve 48 hours in advance. Credit cards accepted by phone and online via BuzzOnStage to guarantee seating.
Posted by Bonnie Kenaz-Mara at 9:28 AM No comments: