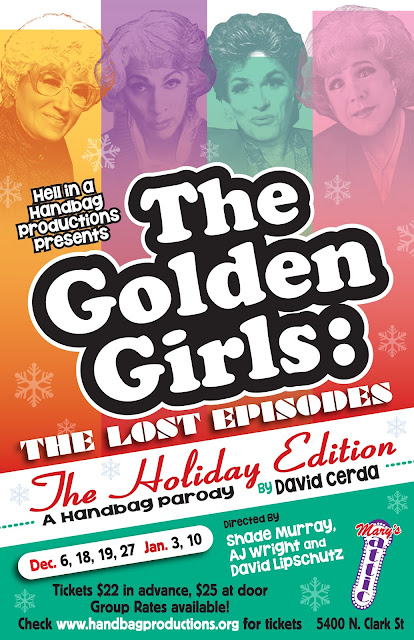 Break out the cheesecake and eggnog – Chicago’s favorite gals are headed back to Andersonville for the holidays, where it all began! Following an 18-week sell-out run, including six-weeks at Lakeview’s Stage 773, Hell in a Handbag Productions' campy world premiere parody THE GOLDEN GIRLS – THE LOST EPISODES will return to Mary’s Attic (5400 N. Clark St., Chicago) for six additional performances from December 6, 2017 – January 10, 2018. Written by David Cerda and directed by Shade Murray, AJ Wright and David Lipschutz, the campy parody of one of TV's most beloved sitcoms will feature the best of the original run – plus a new holiday-themed episode! THE GOLDEN GIRLS will run in conjunction with the return of Handbag’s holiday favorite RUDOLPH THE RED-HOSED REINDEER. Tickets for both productions are currently available at www.handbagproductions.org or by calling (800) 838-3006.

Enjoy lost, never-before-seen episodes of The Golden Girls featuring Dorothy, Rose, Blanche, Sophia and all of the siblings, daughters, sons, characters and rare diseases that were mentioned once, but never again. The production also features The Golden Girls trivia and games to help fully embrace the Miami experience.

In keeping with the Handbag tradition, THE GOLDEN GIRLS – THE LOST EPISODES is an original parody of the beloved show. Our Golden Girls find themselves in situations never before seen on television – that’s why they’re lost episodes! Watch the girls band together as Rose struggles with a debilitating malady that threatens to tear them apart. See what happens when Blanche has a hot and steamy encounter with a jazzercise instructor. The holiday edition features a new episode where Rose meets Santa Claus.

About the Creative Team
David Cerda (Playwright) is the co-founder and Artistic Director of Hell in a Handbag Productions. He has written and appeared in POSEIDON!  An Upside Down Musical, The Birds, Rudolph the Red-Hosed Reindeer, SCARRIE The Musical, Caged Dames, Lady X, How Whatever Happened to Baby Jane Happened, TROGG! A Rock and Roll Musical, Christmas Dearest, Scream, Queen! SCREAM!, The Rip Nelson Halloween Spooktacular , Sexy Baby and most recently the Jeff recommended Lady X The Musical. His plays have been produced around the country. He has also worked as a songwriter/lyricist with Amazon Films on an animated project and as an actor with various theater companies throughout the city of Chicago. Cerda was recently inducted into the Chicago Gay and Lesbian Hall of Fame for his contributions to Chicago theatre.

Shade Murray (Co-Director) is happy to be back at Hell In A Handbag, where he directed The Divine Sister. He is an ensemble member of A Red Orchid Theater, where he has directed the world premieres of Brett Neveu’s Pilgrim’s Progress and Ike Holter’s Sender, as well as productions of David Adjmi's 3C, Marisa Wegrzyn’s Mud Blue Sky and The Butcher of Baraboo, Annie Baker’s The Aliens, Nick Jones’ Trevor, Mike Leigh’s Abigail’s Party and Kimberly Akimbo by David Lindsay-Abaire. He also performed in the A Red Orchid production of The Mutilated. Other directing credits include Steppenwolf Theatre Company, The House Theater, Steep Theater, Second City, Writers’ Theater and elsewhere. Shade is a lecturer at University of Chicago and teaches at DePaul University and Actors’ Studio Chicago.

AJ Wright (Co-Director) is a graduate of Ball State University and proud ensemble member with Hell in a Handbag Productions where he also serves as Production Manager. Directing credits include:  The Golden Girls: The Lost Episodes (Late Night Edition), Caged Dames (Jeff Recommended), Christmas Dearest (Jeff Recommended), and Rudolph the Red-Hosed Reindeer (2011, 2012 & 2017). As an actor, he has been seen in Bewildered (Darrin G), The Golden Girls: The Lost Episodes (Blanche), Rip Nelson’s Holiday Spectacular (Peggy Lennon), Sexy Baby (Kyle Kennedy) and SCARRIE (Tommy Ross). AJ is also a member of the Jeff Committee and had the pleasure of writing and assistant directing the 44th Annual Non-Equity Joseph Jefferson Awards and looks forward to writing the 45th Annual ceremony in 2017.

David Lipschutz (Co-Director) is a proud company member, he has worked on nearly twenty Handbag productions. David previously directed the staged reading of Psycho Beach Party and assistant directed Miracle and Christmas Dearest. He has also directed/assistant directed with Underscore Theatre, Runaways Lab Theatre, Generic Theatre Company and BPB Co. (company member), where he will be directing the upcoming production of Speech & Debate.

For additional information, visit www.handbagproductions.org.
Posted by Bonnie Kenaz-Mara at 7:43 AM No comments: