The Magic is Back®! 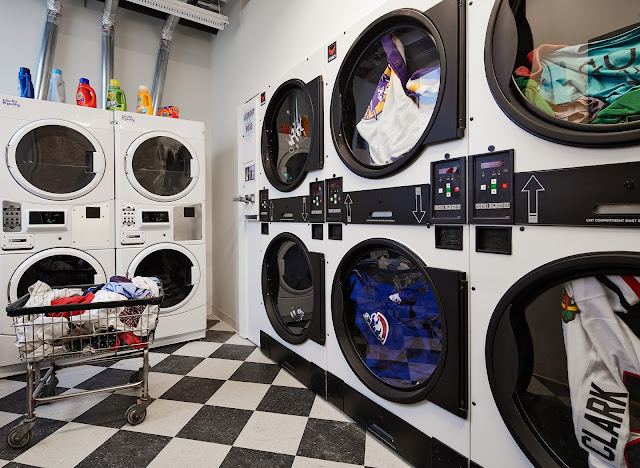 Chicago Magic Lounge,
the area’s premium venue for Chicago-style, close-up magic
to reopen its secret doors to the pubic
on August 2, 2021

Here at ChiIL Live Shows we've been excited about Chicago Magic Lounge since we were first invited to cover their groundbreaking. We were there for their original press opening and many shows since, and we missed them the past 16 months when their stage went dark. That's why we're so excited The Magic is Back®! Chicago Magic Lounge, Chicago’s home for close-up magic, announces plans to reopen its speakeasy-style Art Deco venue on August 2, 2021. We dig their minimalist signage and secret entrance through the laundry, a nod to the building's former use as a commercial laundry. The inner swinging bookcase entrance is sweet too! Ready for some post quarantine entertainment? Chicago Magic Lounge has got you covered with mind bending magic and Art Deco charm. 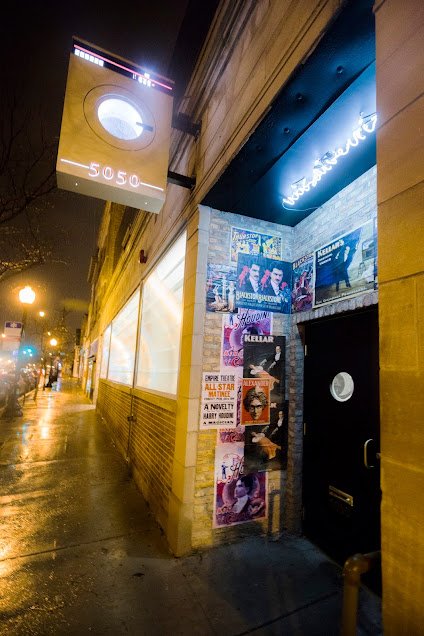 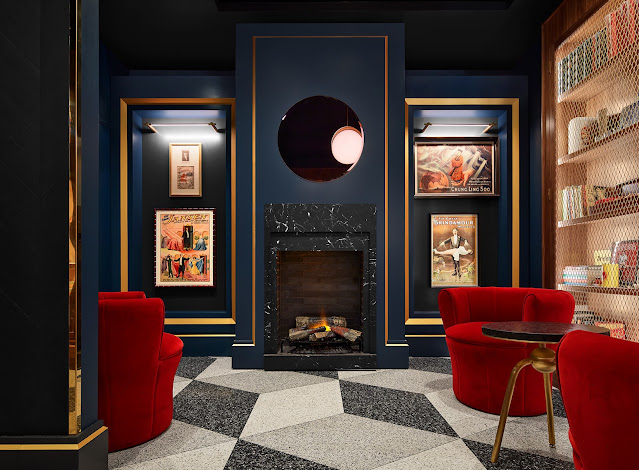 CML Owner Joey Cranford comments, “Chicago Magic Lounge is like no other place in Chicago, or elsewhere else, for that matter. We are thrilled to be reopening the secret doors to our gorgeous venue offering a unique entertainment experience. We can’t wait to welcome our audience, magicians and staff. Like so many, we have been looking forward to Opening Day for so long. In honor of our reopening, we want to celebrate the heart of Chicago-style magic by featuring Chicago Magic Lounge company members and local fan favorites, who rank alongside the best magicians worldwide.”

Showtimes for the opening week are 7pm Monday-Sunday and 10pm on Fridays and Saturdays. Premium tickets (Front Row, Main Floor Cabaret, Main Floor Banquette) are $65 - $75 and include access to exclusive close-up magic performance in the 654 Club immediately after the main stage show. Standard tickets (Rail Seating, Elevated Banquettes, Mezzanine) are $50 - $55. The Performance Bar is open to the public (21+) and no ticket is needed.

The Signature Show was conceived in 2015 as an homage to the historic, Chicago magic bar scene. Experience close-up magic right at your table during the cocktail hour, followed by an hour of stage magic featuring masters of their craft performing feats of prestidigitation and sleight of hand. Guests who purchase Premium tickets (Front Row, Main Floor Cabaret, Main Floor Banquette) are invited to an exclusive performance of close-up magic directly after the main stage show in our 43-seat close-up gallery, The 654 Club. 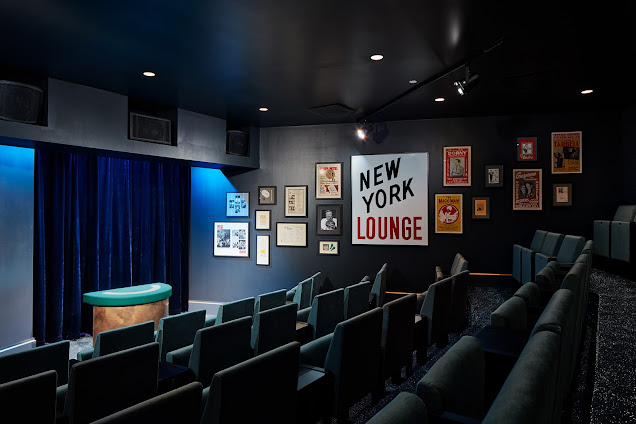 Luis Carreon is an accomplished and well-respected magician, originally from Mexico. He won the Harlan Tarbell Close-up Competition Award from the International Brotherhood of Magicians two years in a row. He also took home first place at the Chicago Magic Competition hosted by The Society of American Magicians.

With his unique style of humor and wisdom, Luis regularly travels the country teaching other magicians about the art of magic. He is, also, the head demonstrator at Magic Inc., the oldest family-owned magic shop in the country. Internationally, Luis has been featured on the Univision evening news showcasing his talents. He was honored to be a semi-finalist on Tengo Talento, the Spanish language equivalent of America's Got Talent. In addition, he is also a frequent performer at the famous Magic Castle in Hollywood, California. Luis can be seen performing regularly at The Chicago Magic Lounge where he is also one of the founding members.

Justin Purcell is relentlessly trying to convince audiences: Magic is REAL. Chicago Magazine wrote he performs “with the aplomb of a ringmaster and the flair of a standup comedian” in their issue naming him “Chicago’s Best Bar Magician.” And even top magical expert Dan Harlan calls his sleight-of-hand work “sublime.” He is a founding company member of the Chicago Magic Lounge, where he is a House Magician and frequent Headliner. In addition to doing magic, he plays drums for feminist punk band The Cell Phones and is a father.

Currently living in Chicago, Paige Thompson has become one of the Resident house magicians of the Chicago Magic Lounge.  A longtime dream was recently fulfilled as she appeared for the first time in the close-up gallery at the internationally acclaimed Magic Castle, in Hollywood California.  Paige was also a featured contestant on FOX’s “Showtime at the Apollo,” and last summer made her debut on the CW’s hit television show “Masters of Illusion.”

Jan Rose has performed nationally and internationally in all fields of Magic including Family Theatre, Corporate Events, Trade Shows and Conventions, and at Hollywood’s’ World Famous Magic Castle. Jan began her career in Magic in 1983, after joining forces with Magician Danny Orleans. Together they toured their Children’s Theatre Show for well over 6 years. In the early 1990’s, they were mentored by Eddie Fields. The result of that training is a two person show that puts a contemporary spin on an old Variety Act. Jan has been so very grateful to have worked with such great mentors as Eugene Burger, Jay Marshall, Max Maven and Ross Johnson. Happy to return to the theatre, Jan was a supporting Actress/Magic Team Member of The Rosenkranz Mysteries at The Royal George Theatre. She performed over 100 performances of that show! Jan is a Company Member and has been with The Chicago Magic Lounge since the early days in Uptown. She is a native Chicagoan and a member of AEA, AFTRA, and SAG. 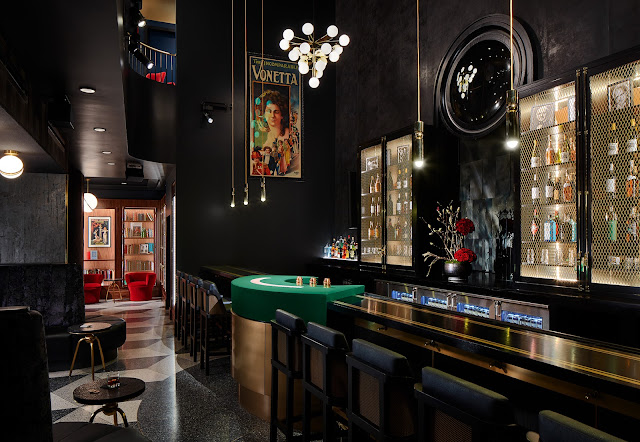 The regular schedule will return on Monday, August 9, including Music & Magic on Monday nights at 7:00pm, The Showcase on Tuesdays the Artist-in-Residence Series.

Trent James is back to complete his original run from Spring 2020, along with a one-month extension!

Thursdays-Sundays at 7:00pm, Fridays and Sundays at 10pm from August 12–August 15

Special Guest Nick Diffatte is quickly becoming one of the most talked about and in-demand young comic magicians working today. His unique brand of entertainment seamlessly blends dry humor, quick wit, and incredible skill. His performances are presented with perfect comedic timing and a deadpan delivery that has kept audiences laughing uncontrollably all over the country for over 14 years. Most recently, Nick has been seen in a residency at the Planet Hollywood Casino in Las Vegas, The World Famous Magic Castle in Hollywood, luxury cruise lines and “The Late Late Show with James Corden” on CBS.

For a complete schedule of performances and more information about Chicago Magic Lounge, visit chicagomagiclounge.com.

Chicago Magic Lounge reinvents the classic "magic bar" that once dotted Chicago's nightlife landscape, bringing cocktails and card tricks back together again. Shows include magic performance at the bar, on the stage and in true Chicago-style Magic form, at the tables of the guests, providing the classic "Close-Up" tradition Chicago-style Magic is known for. Chicago Magic Lounge is also the home of the Chicagoland magic community, showcasing over 30 local professionals, and serving as a networking hub for working magicians from all over the world.

The newly constructed theater at 5050 N. Clark St., designed by Morris Architects Planners, has ushered in a new wave of entertainment, bringing back “Chicago-style Magic” under the leadership of Donald C Clark, Jr. and Joseph (Joey) Cranford. Converted from a 1940s-era, commercial laundry building, the Chicago Magic Lounge is a 7,200 square-foot, Art Deco, state-of-the-art theater and lounge complete with secret doors, elegant performance areas and a magic bar – all dedicated to the art of sleight of hand, prestidigitation and Chicago's contribution to the magical arts. From magicians to mind readers, Chicago Magic Lounge provides guests the unique, one-of-a-kind experience of seeing wonders up-close and personal in a venue unlike anything else offered throughout the country. 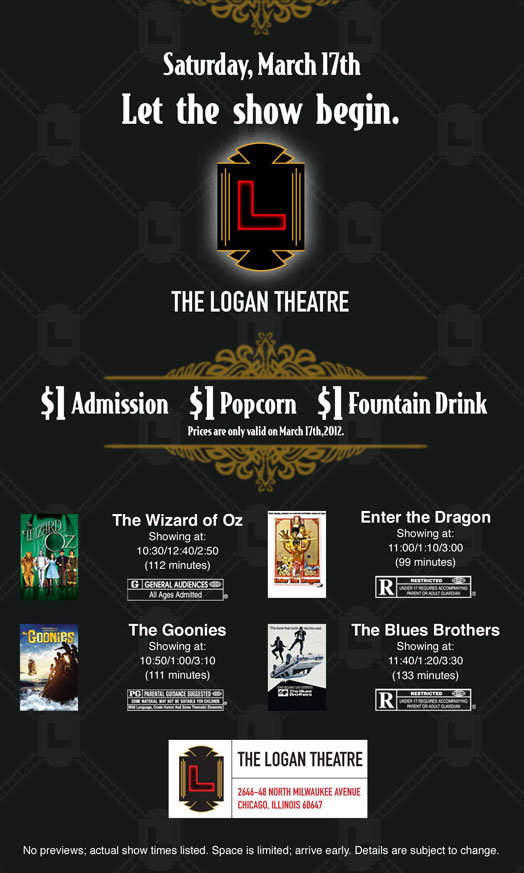 The Logan Theatre is celebrating it's grand reopening this Saturday 3/17/12 with an eclectic mix of movie favs and dollar deals on flicks, drinks, & that ubiquitous show staple, popcorn.    Check out shows, times and details above.

Rumor has it, they ditched the lumpy, old chairs & the moldy smell and will be showing more art films in addition to new releases that have been out a short while already.   Hope you don't raise the admission price too much for the new fancy schmancyness.   We dig that you offered $3.00 shows all the time.   Welcome back Logan.   We've missed you.
Posted by Bonnie Kenaz-Mara at 1:26 PM No comments: