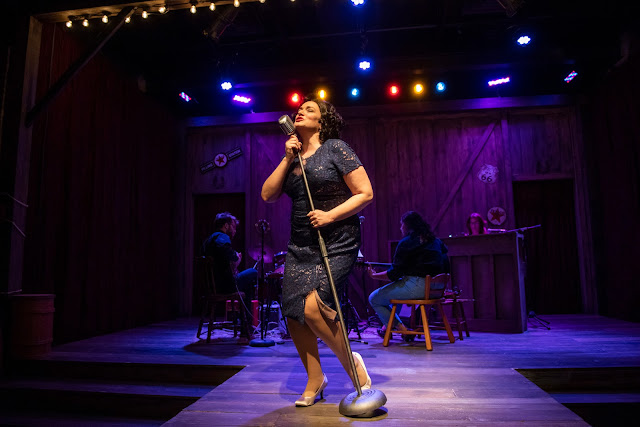 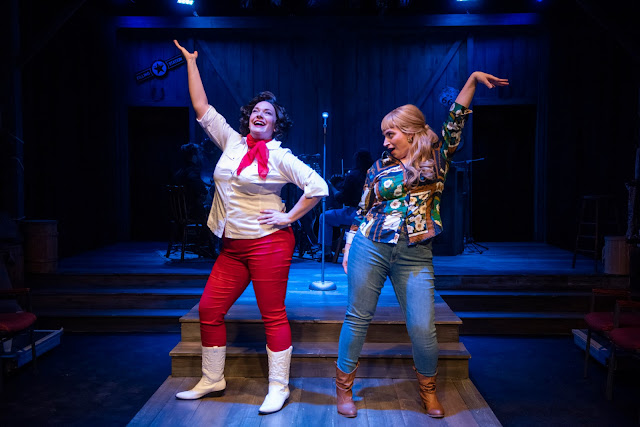 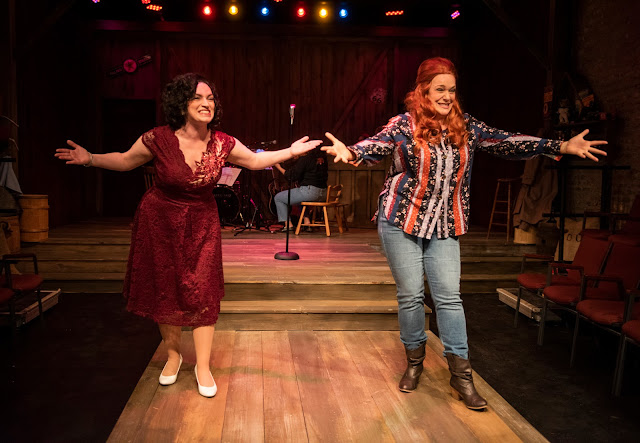 Trading Off In The Lead Roles:
Harmony France as Patsy Cline & Christina Hall as Louise Seger

Firebrand Theatre’s Always Patsy Cline is so enjoyable, I just bought 3 tickets as birthday gifts and I'm sending my in laws and husband to catch it this weekend. For the press opening, I caught Christina Hall as iconic country crossover star, Patsy Cline. Her impressive vocals and embodiment of Cline were spot on. 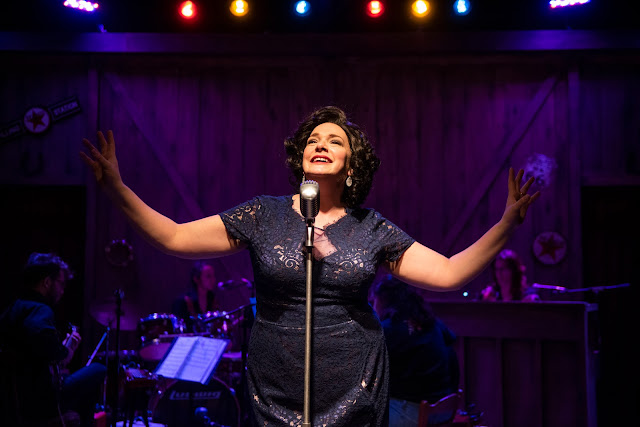 I also adored Firebrand's Artistic Director, Harmony France as feisty, fangirl Louise. She's a hoot! Both powerhouse vocalists have played Patsy Cline in past productions, so either cast configuration is a win/win and I love that Firebrand has cast the show this way. It's a rare treat to see a production where the leads trade off in a 50/50 split, and it's exciting to see how it changes up the show having different actors in each role. I'm seriously considering coming back again to see the roles swapped. 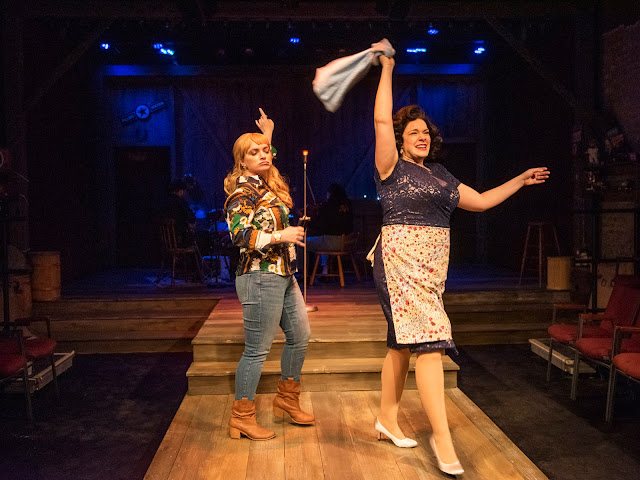 Always Patsy Cline is a delightful time capsule of true friendship, the travails of touring as a young mother, southern hospitality, old school correspondence and the power of music to draw people together and get them through tough times. Don't miss this celebration of simpler times and a talent taken too soon. 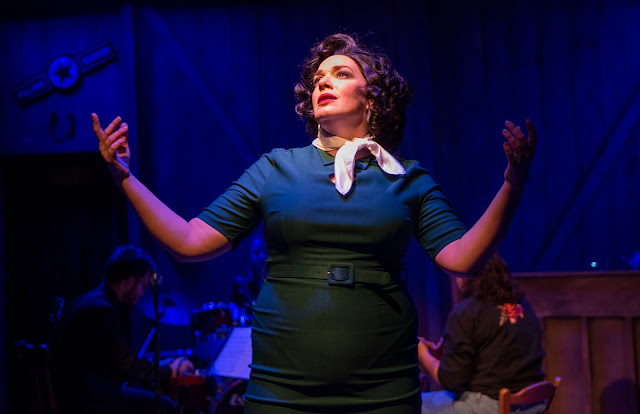 From blackbox to barn, The Den Theatre’s Janet Bookspan Theatre has been transformed into a homey little venue, complete with cabaret tables and southern charm. The band is dressed for line dancing and prominently featured on stage, where they are fun to watch as they play and interact with Patsy and Louise. 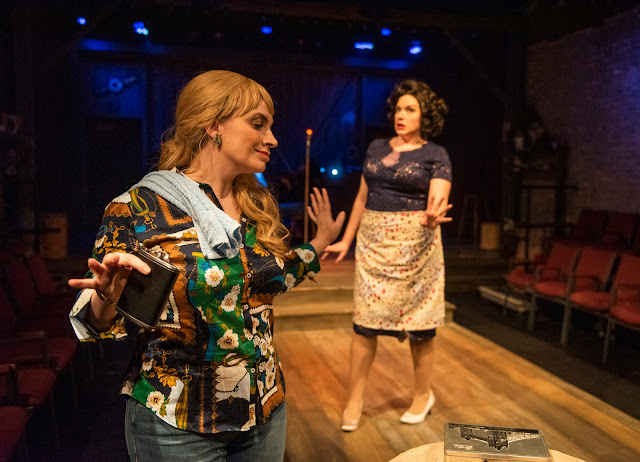 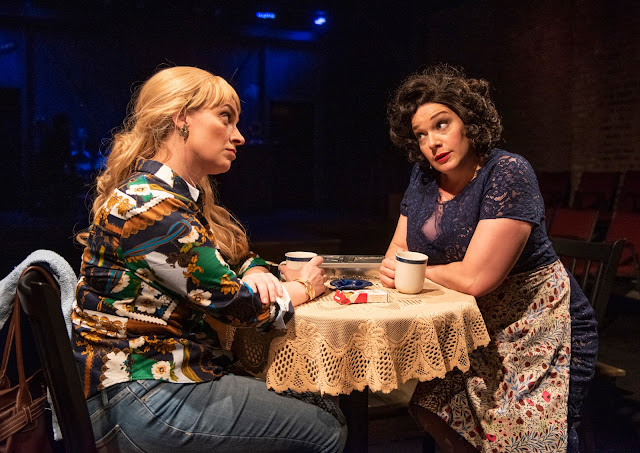 Whether these two are breaking out a flask or spilling the tea about exes, kids and life, Firebrand's rendition of this true life friendship is heartfelt, funny and sustaining. Expect to enjoy many of Patsy's unforgettable hits such as “Crazy,” “I Fall to Pieces,” “Sweet Dreams” and “Walking After Midnight”… 27 songs in all!  The show’s title was inspired by Patsy’s letters to Louise, which were consistently signed “Love ALWAYS… Patsy Cline.” 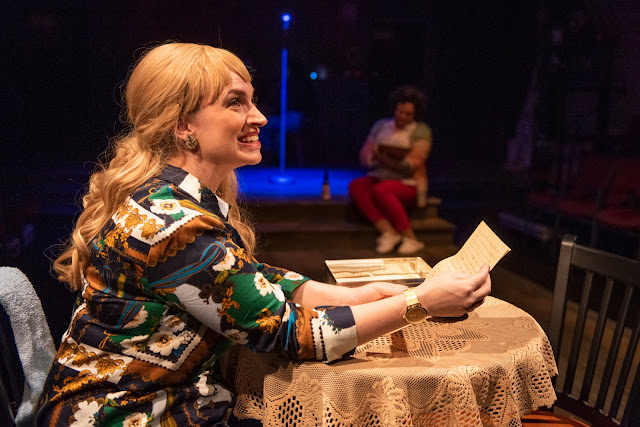 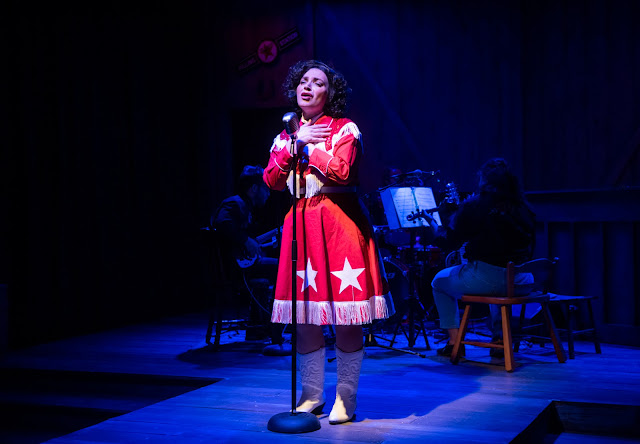 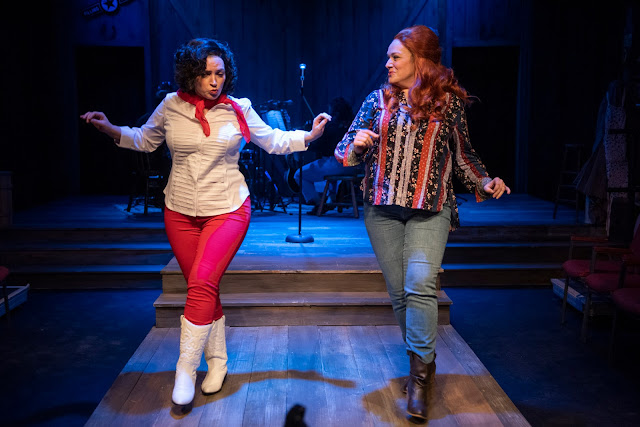 Written by Ted Swindley, with direction by Brigitte Ditmars and music direction by Andra Velis Simon, ALWAYS… PATSY CLINE, features Artistic Director Harmony France and Christina Hall, who have both previously played the titular music legend. France and Hall alternate in the roles of Patsy Cline and Louise Seger – so if you love the show, come see it again with the cast flipped! For tickets and a schedule of roles, visit firebrandtheatre.org.

Patsy Cline was an American country music singer and part of the Nashville sound during the late 1950s and early 1960s. She successfully "crossed over" to pop music and was one of the most influential, successful, and acclaimed vocalists of the 20th century.

ALWAYS… PATSY CLINE is based on the true story of Patsy's friendship with Houstonite Louise Seger. Having first heard Patsy on the Arthur Godfrey Show in 1957, Louise became an immediate and avid fan of Patsy's and she constantly hounded the local disc jockey to play Patsy's records on the radio. In 1961 when Patsy went to Houston for a show, Louise and her buddies arrived about an hour-and-a-half early and, by coincidence, met Patsy who was traveling alone. The two women struck up a friendship – a friendship that lasted the rest of Patsy Cline's life. 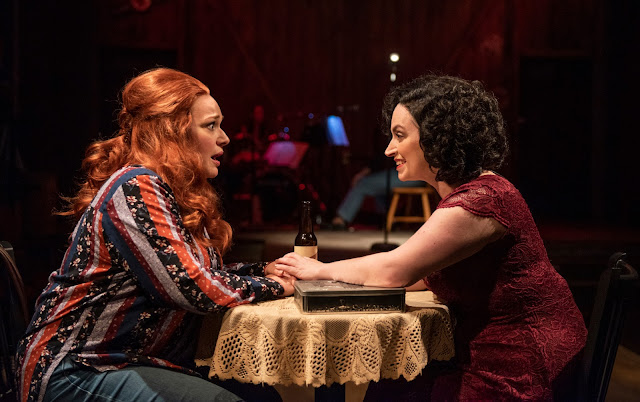 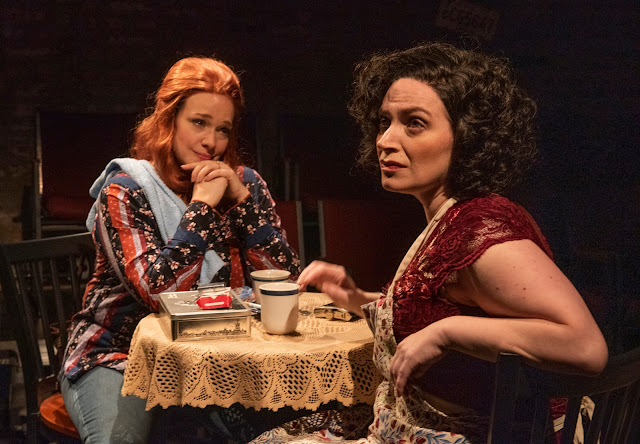 Firebrand is the first musical theatre company committed to employing and empowering womxn* by expanding opportunities on and off the stage. *womxn is used to include trans and non-binary folx.

Harmony France (Patsy Cline/Louise Seger) is a founder and the artistic director of Firebrand Theatre, Chicago's own feminist musical theatre company, where she has been the producer of Lizzie, 9 To 5, Caroline, Or Change, Queen of the Mist and now, Always… Patsy Cline. As an actor, Harmony has traveled the world with the Broadway National/International tour of Sister Act. She has been nominated for two Jeff Awards for Best actress and is the recipient of a BroadwayWorld Award for playing the title role in Violet at Bailiwick Chicago. Most recently she was the asst. director for David Cromer's acclaimed production of Next To Normal at Writers Theatre. Additionally, Harmony has worked with TimeLine Theatre, Paramount Theatre, Peninsula Players, Theatre at the Center, American Theater Company, Porchlight Music Theatre, Bohemian Theatre Ensemble, Windy City Playhouse, The New Colony, Route 66, City Lit Theatre, and Timberlake Playhouse where she played Patsy in  Always, Patsy Cline. She studied opera at Brenau University, acting at Columbia College, and Shakespeare at the Royal Academy of Dramatic Arts. In 2019, she was honored by NewCity Stage as one of the “Fifty People Who Really Perform for Chicago” and has been featured in Crain’s Chicago Business, Chicago Social and Playbill.

Andra Velis Simon (Music Director) is the Resident Music Director for Firebrand, where she has music directed Caroline, or Change, 9 to 5 The Musical, and Firebrand’s inaugural production of Lizzie. Andra has worked regionally at Actors Theatre of Louisville, A.R.T. in Cambridge, Berkeley Rep, Brooklyn Academy of Music, NYU’s Skirball Center, Olney Theatre Center in Maryland, Oregon Shakespeare Festival, Pasadena Playhouse, and others. In Chicago, her work has been seen at Steppenwolf, Goodman, Chicago Children’s Theatre, Theater Wit, The Hypocrites, and dozens of others. Most recently, she music directed Next to Normal at Writers Theatre and A Gentleman’s Guide to Love and Murderat Porchlight Music Theatre. Andra is also adjunct faculty at Columbia College Chicago, where she has taught musical theatre performance since 2008.

Firebrand Theatre the world’s first equity musical theatre company committed to employing and empowering womxn* on and off the stage. Based in the vibrant city of Chicago, Firebrand Theatre’s productions will expand the traditional roles of womxn in musical theatre by reimagining classics, producing unknown gems and commissioning new works. *womxn is used to include trans and non-binary folx. Firebrand is a 501(c)(3) Equity theatre.