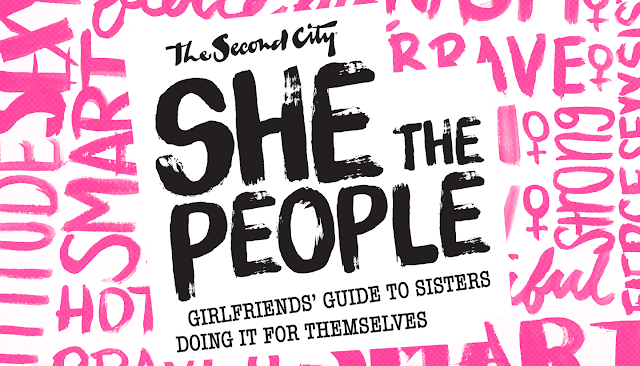 Here at ChiIL Live Shows, we love sketch comedy and funny women. Can't wait to catch this remount of The Second City’s hit, She The People.

Back by popular demand, The Second City’s She the People: Girlfriends’ Guide to Sisters Doing It for Themselves, a sketch show created, designed and performed entirely by the women of Second City, returns to the stage in 2018. Under the direction of Carly Heffernan with musical direction by Mary Mahoney, She the People runs January 11 – April 1, 2018, in The Second City’s UP Comedy Club. Tickets start at $26 and can be purchased at the box office, by phone at (312) 662-4562 or online at www.secondcity.com. UP Comedy Club is located on the 3rd Floor of Piper’s Alley at 230 W North Ave, Chicago.

We’ll bet you 72 cents on the dollar (or much, much less!) you’ll cheer for the women of The Second City as they roast the patriarchy! This mimosa-and-madness-fueled foray takes on everything from having it all to having that sick feeling your government is trying to send you back to the Middle Ages. It’s time for women everywhere to collectively reclaim comedy!

She the People is written by Carisa Barreca, Marla Caceres, Carly Heffernan, Tien Tran and Lauren Walker. Casting will be announced at a later date.

She the People plays on Thursdays, Fridays and Saturdays at 8pm and Sundays at 7pm at UP Comedy Club, located at 230 W North Ave, 3rd Floor of Piper’s Alley, Chicago. Tickets, starting at $26, are available at the Second City Box Office (230 W. North Ave, First Floor, Piper's Alley), by phone at 312-337-3992 or online at www.secondcity.com.

ABBY BEGGS (Lighting Design) When she’s not in the booth at The Second City, she can be found stage managing, directing and composing music for theatre around town. Stage management credits include: L'enfant et les Sortilèges, L'incoronazione di Poppea (Roosevelt University), The Out of Tooners (Off-Color Theatre Company), Gallo (Guerilla Opera), Blue Window (Brown Box Theatre Project), The Scene, Good People and Barefoot in the Park (Dorset Theatre Festival), among others.

Posted by Bonnie Kenaz-Mara at 12:17 PM No comments:

Email ThisBlogThis!Share to TwitterShare to FacebookShare to Pinterest
Labels: comedy, Piper's Alley, sketch comedy, The Second City, The Second City’s She the People: Girlfriends’ Guide to Sisters Doing it for Themselves, Theatre Chicago, Up Comedy Club
Older Posts Home
Subscribe to: Posts (Atom)