Pay What You Can World Premiere of THIS IS ONLY A TEST Via Broken Nose Theatre February 11 – March 12, 2022

THIS IS ONLY A TEST 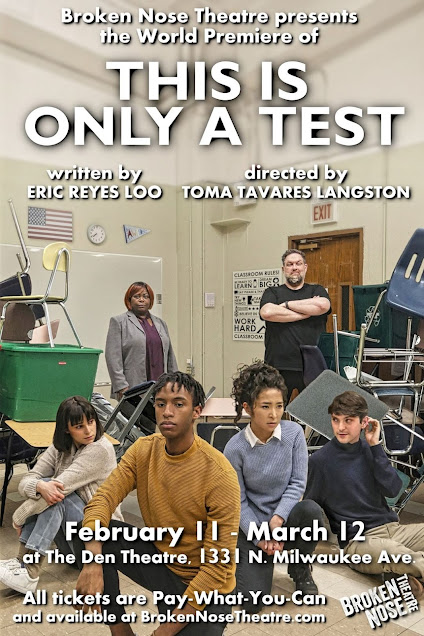 Broken Nose Theatre, one of Chicago’s premier Pay-What-You-Can theatre companies, is pleased to welcome back live audiences this winter with the world premiere of Eric Reyes Loo’s drama This Is Only a Test, directed by Toma Tavares Langston. This all-too-prescient view of the future our youth may be inheriting will play February 11 – March 12, 2022 at BNT’s resident home, The Den Theatre (2A), 1331 N. Milwaukee Ave. in Chicago’s Wicker Park neighborhood. Tickets are currently available at brokennosetheatre.com and thedentheatre.com. Tickets for all Broken Nose Theatre performances are “Pay-What-You-Can,” allowing patrons to set their own price. I'll be out for the press opening February 13th so check back soon for my full review.

Broken Nose Theatre adheres to all CDC, state and local safety guidelines. Additionally, masking is required for all guests during performances. For the most current information on The Den’s COVID guidelines, visit thedentheatre.com/covid19-policy.

It could happen anywhere, at any time, and the faculty at Washington High have decided to take "being prepared" to a whole new level. Through a series of Active Shooter Drills, their students will be trained on how to fight back against intruders. But as they’re asked to quell violence by responding violently, four teenagers begin to wonder: if we’re so prepared, why do we feel even more unsafe? Directed by rising director Toma Tavares Langston (The Light; Hedwig and the Angry Itch), this brand-new play asks us to consider the moment when preparing for the worst tips over into a whole new breed of violence all its own.

Artistic Director E.M. Davis and Managing Director Rose Hamill comment, “When the ensemble first read Eric's darkly satirical play over three years ago, the terrifying but necessary questions it asked were immediately impossible to shake. And now, as we continue to stare into an uncertain future, the conversations it provokes feel all the more prevalent. What sort of world are we passing down to our children? If they can't even feel safe in their place of learning, what haven can we possibly offer them? And worse, when we place the promise of security in the kids' own ability to retaliate, how soon before we exacerbate the issue and push them to their breaking point? We're proud to be partnering with director Toma Tavares Langston to bring this highly original new play to Chicago audiences for its world premiere.”

Tickets: Pay-what-you-can. Tickets are currently available at brokennosetheatre.com and thedentheatre.com.

Eric Reyes Loo (Playwright) spent his childhood crafting the perfect comeback during his sixteen years of Catholic school education, where his mother sent him to become a priest. He came out a theatre queen and loudmouth jokester instead. All of this gave him plenty of material as he turned to writing and producing theatre in New York and his native Los Angeles. Eric’s critically-acclaimed play Death and Cockroaches was produced by Chalk Repertory Theatre, where Eric is also a member of the Artistic Circle. In addition, Eric is a television writer/producer who has written on Guidance for AwesomenessTV/Hulu and A.J. and the Queen for Netflix. He also has numerous projects in development.

Toma Tavares Langston (Director) is a Chicago freelance theater director. Notable works include Hedwig and the Angry Inch (Theo Ubique – 2020 Jeff Nomination, Production – Musical) and The Light (The New Colony – 2018 Jeff Nomination, Director – Play). Toma was awarded a 2015 Victory Gardens Theater Director Inclusion Initiative fellowship. Other Chicago works include Sucker Punch (Victory Gardens, Assistant Director), 1980 or Why I'm Voting for John Anderson (Jackalope Theatre, Assistant Director), The Last Five Years, The Shadow Box, For Colored Girls Who Considered Suicide/When the Rainbow Is Enuf. He is currently pursuing his MBA in Public Administration at Southern New Hampshire University. Toma would like to give a special thanks to E.M., Rose, Eric and the Broken Nose Theatre crew for the opportunity to tell this impactful story. 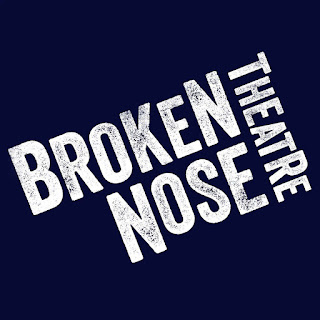 Broken Nose Theatre is a Pay-What-You-Can theatre company. Founded in 2012, BNT was the 2018 recipient of the Emerging Theater Award, presented by the League of Chicago Theatres and Broadway in Chicago. The company has produced and developed 30 full-length plays (including 12 Chicago or world premieres) and over 60 new short plays through our annual Bechdel Fest. We strive to spark conversation, cultivate empathy, and amplify underrepresented voices, and are committed to making new, exciting and relevant theatre that is economically accessible to all audiences. For more information, please visit brokennosetheatre.com.