Tickets go on sale this Saturday, September 28th at noon ET via www.pro-rock.com. 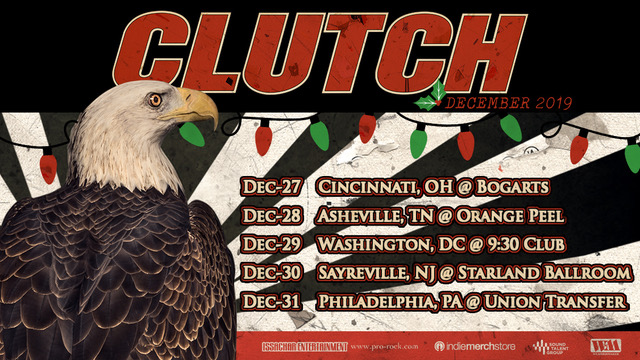 Clutch announce December 2019 tour dates for their annual US Holiday Run Tour. The tour kicks off December 27th at Bogarts in Cincinnati, OH and ends with a special New Years Eve show at Union Transfer in Philadelphia, PA. Main support on all dates will be The Steel Woods from Nashville, TN. Damon Johnson, guitarist/singer songwriter will open all shows except Asheville, NC.  Our good friends Tyler Bryant and the Shakedown will open the Asheville, NC show.

Over the past few months, the band has been releasing a series of new studio recordings that comprise the newly launched Weathermaker Vault Series.  This is the first new official music Clutch is making available since the release of their critically acclaimed album, Book Of Bad Decisions.  The first three singles (Evil, Precious And Grace, and Electric Worry) were mixed by 6X Grammy Award winner and Clutch collaborator, Vance Powell (Wolfmother, The Raconteurs, Arctic Monkeys) and are available now on all digital platforms.

Over the last couple of months, Clutch has very successfully curated their own Spotify playlist “Clutch’s Heavy Rotation”. Thousands of fans are following the ever-changing playlist.

Clutch is currently on a US Fall Tour with Dropkick Murphys along with metalcore veterans Hatebreed as direct support.

Oderus is missing. Once the Scumdogs in GWAR finally notice this (it takes them a while to notice stuff) they will set off on a journey to find their departed brother using every resource available - including recruiting an ancient Scumdog warrior. GWAR will need the help from everyone, even the lowliest Bohab, as their enemies are plotting to take advantage of the hole in GWAR's ranks. 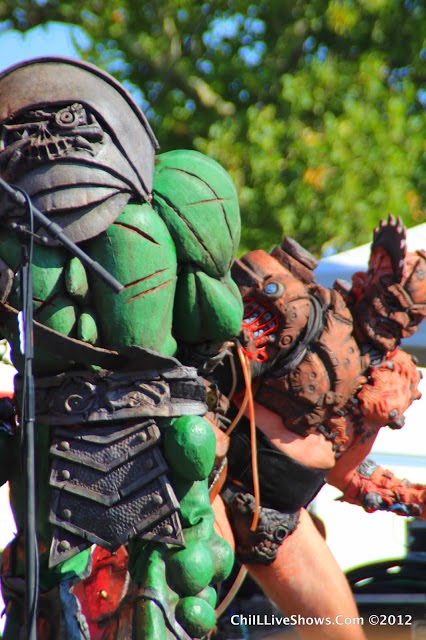 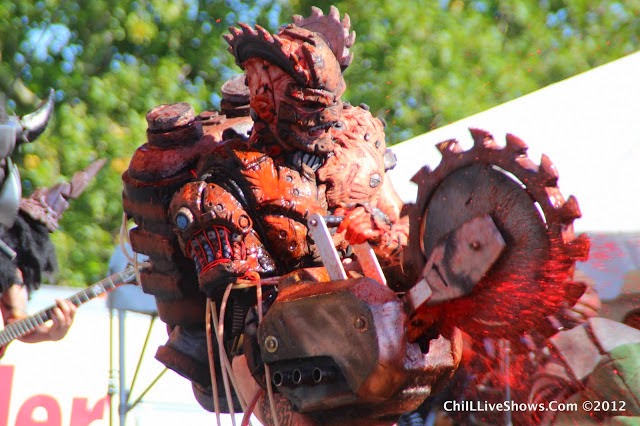 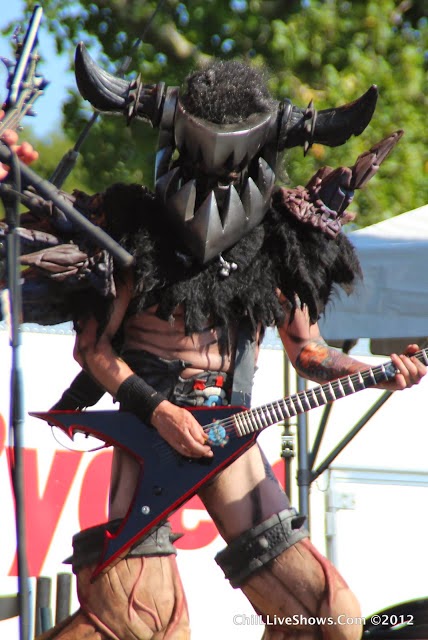 BalSac The Jaws of Death on The "GWAR Eternal Tour 2014" and what to expect:

"Dark clouds of war and ill omen have gathered around GWAR. In our hour of greatest peril, Oderus has left us and our enemies stand poised, ready to strike while they sense weakness. But we shall no longer cower in our Antarctic stronghold, awaiting Destiny's final blow. This Fall GWAR sets out on the most trying quest of our career. We shall scour our leader's favorite stomping ground, North America, leaving no city unsearched, no venue unraised, and no sheep unmolested. GWAR will venture to the depths of Hell or to the very end of Time itself, and though I fear what we may encounter out there, I know that we can never return home until we have the answer we seek: 'Where is Oderus Urungus?'"

GWAR fans have been mourning the loss of Dave Brockie, GWAR's founder and lead singer, since March. The "GWAR Eternal Tour 2014" gives them an opportunity to gather and share a bunch of feels as a community while experiencing the sickest band in this or any other world. 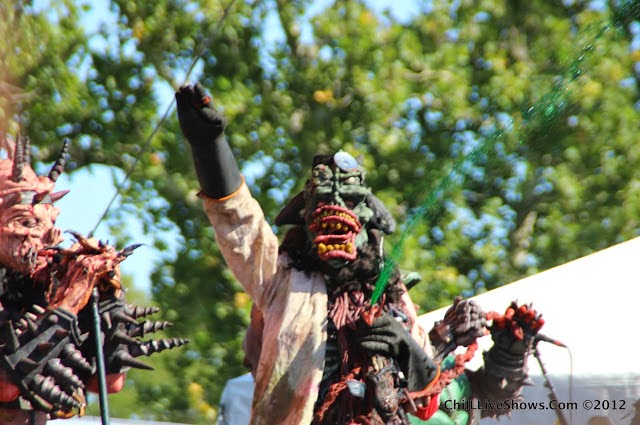 "Dave was our friend and anchor for as far back as anyone can remember.  He's held us together, and sometimes he drove us apart.  He is our brother and we love him. Unlike a lot of prominent musicians, he was friends with all of the fans. He made GWAR fans feel special on a personal level.  The fans love Dave as much as we do and 'The GWAR Eternal Tour 2014' is our way of getting together and sharing that love."

The first leg of the tour will include direct support from Decapitated; the second leg will have direct support from Corrosion of Conformity.  American Sharks will open all shows.  The tour kicks off October 15th in Norfolk, VA and runs through December 13th in Baltimore, MD.  A complete list of dates can be found below.  Tickets go on sale this weekend. 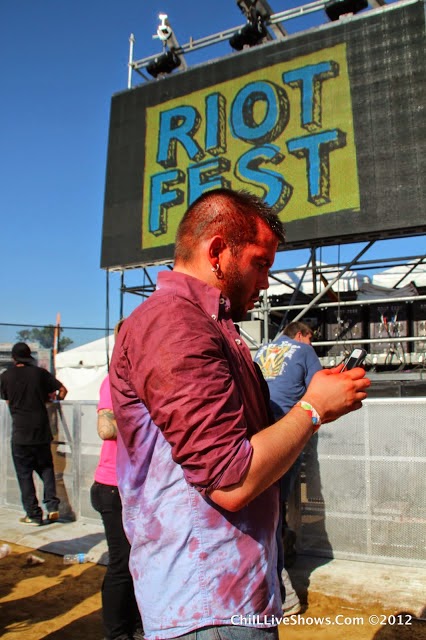 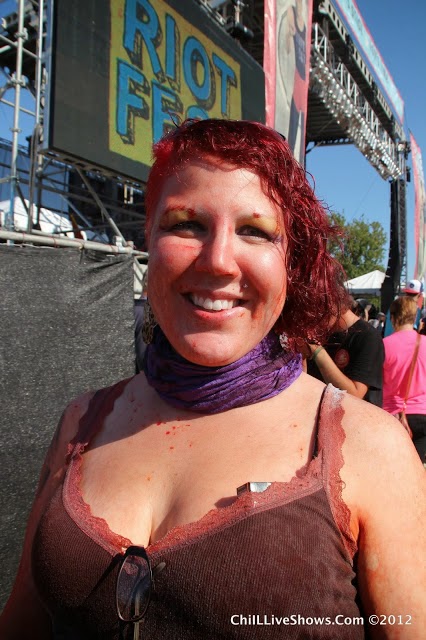 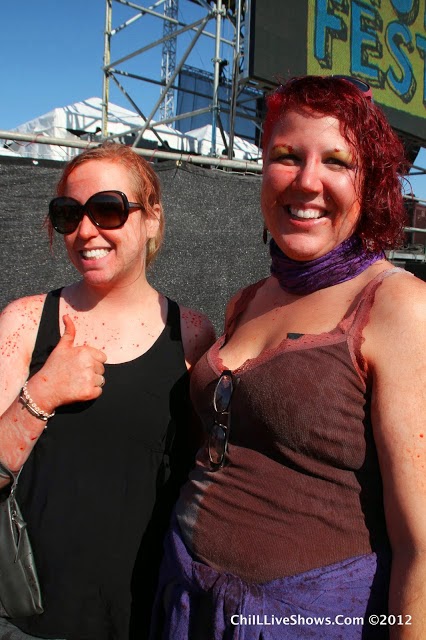 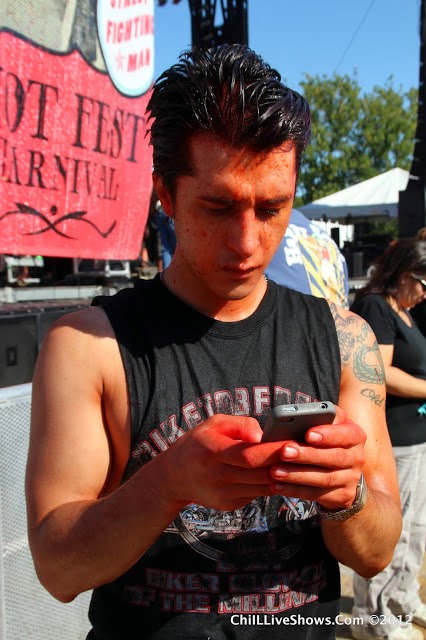 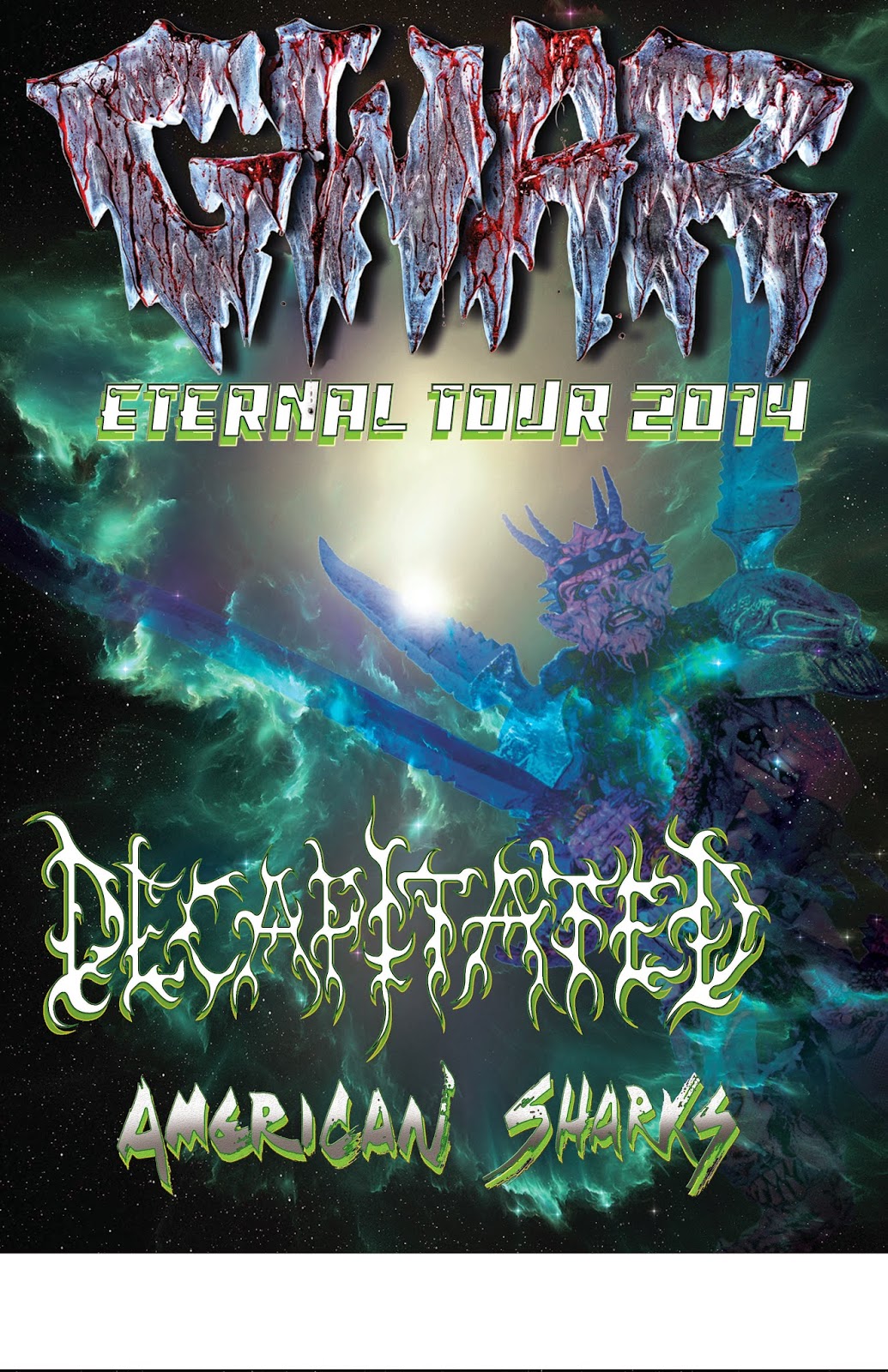 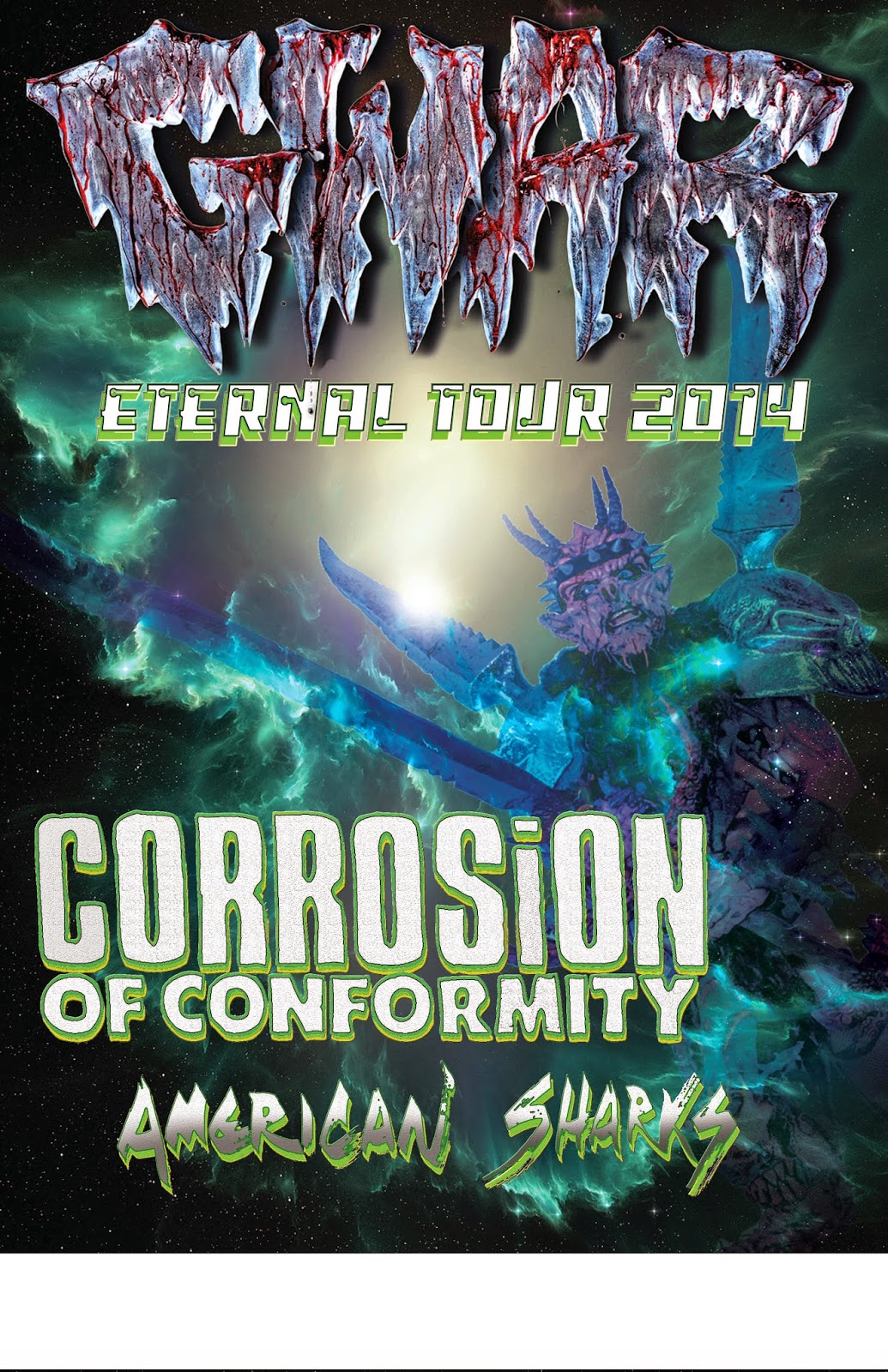 *No American Sharks
** Havok plays on this show 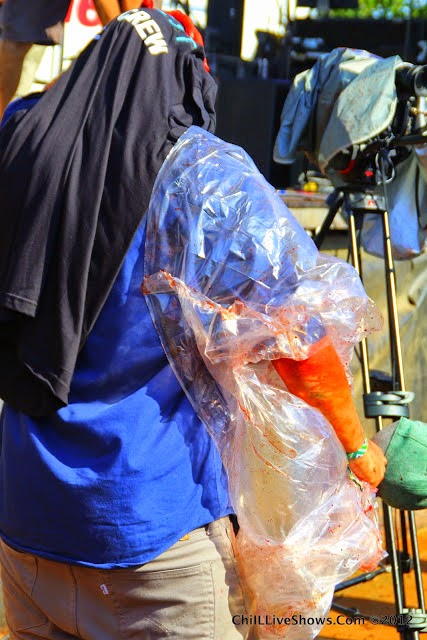 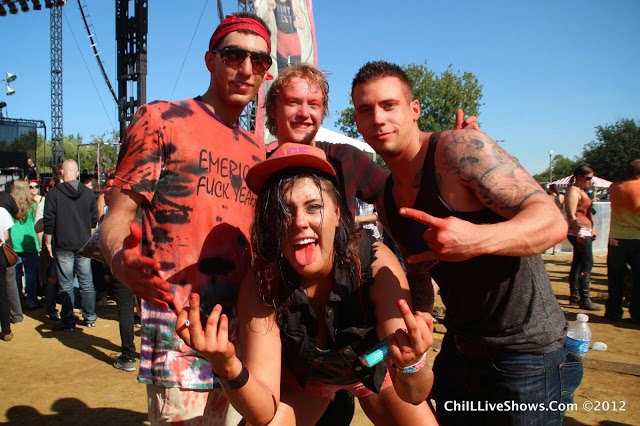 Posted by Bonnie Kenaz-Mara at 5:39 PM No comments: