ChiIL Live Shows will be there...will YOU?!   We've shot these guys a couple times before and they do shine LIVE.   Come on out for what's sure to be a rockin' good time with wickedly witty lyrics and sexy guitar riffs.   Then check back like we vote in Chi, IL...early and often for our photo filled recap.

Check out more of our past Nashville Pussy coverage here, including our original photo filled features from an earlier Reggies show and Chi-Town's Bottom Lounge.

Yeah, yeah I know there's potentially record setting hockey in the works for tonight--We love you Blackhawks!!   But we'll be recording the game and heading out to Reggies for some kick ass live music instead. 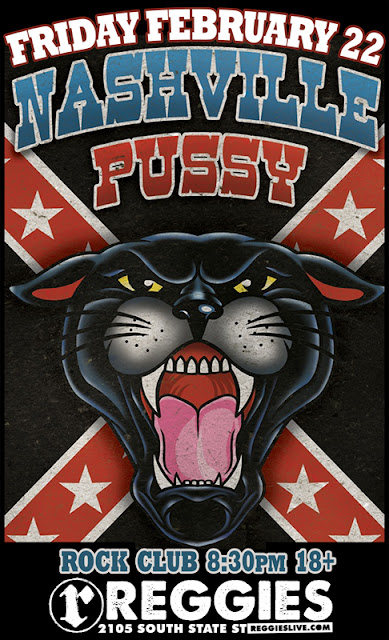 NASHVILLE PUSSY
True rock n’ roll doesn’t require definition. It’s self-explanatory based on a gut feeling and the unconditional devotion to the musical genre. Nashville Pussy have celebrated their brand of genuine rock n’ roll for more than a decade, in classic style at times, surprising at others, but always earthy, raw and unadulterated. Band mastermind Blaine Cartwright (vocals, guitar), his wife Ruyter Suys (guitar), Karen Cuda (bass) and Jeremy Thompson (drums) poured their heart and soul into the latest rock release, entitled From Hell To Texas, which saw the band hone their most impressive recording to date alongside the non stop touring, from Australia, Brazil, Canada, Europe, Japan, and almost a year straight with the Reverend Horton Heat, “We allowed ourselves this time to give the songs the chance to turn out as perfect as possible,” Cartwright explains. “We kept playing the new tracks at our rehearsal room until they really clicked. I feel they’re heavier and grittier than previous releases. The whole creative process took three long years, but the result has been worth the trouble.”
Their songs are mostly about fun and good times, but occasionally – as in the case of ‘Late Great USA’ – they also stick the finger into an open wound. “Although Blaine’s comical and satyrical themes mostly prevail on From Hell To Texas, there are two or three numbers which deal with more serious subjects. ‘Late Great USA’ is a political song, we simply had to vent our anger at certain grievances in this country.”

Posted by Bonnie Kenaz-Mara at 12:00 PM No comments:


Nashville Pussy owned The Bottom Lounge in Chicago Saturday night, opening for The Dwarves.
Posted by Bonnie Kenaz-Mara at 4:16 PM No comments: