REVIEW: The? Unicorn? Hour? at The Neofuturarium Through May 20th 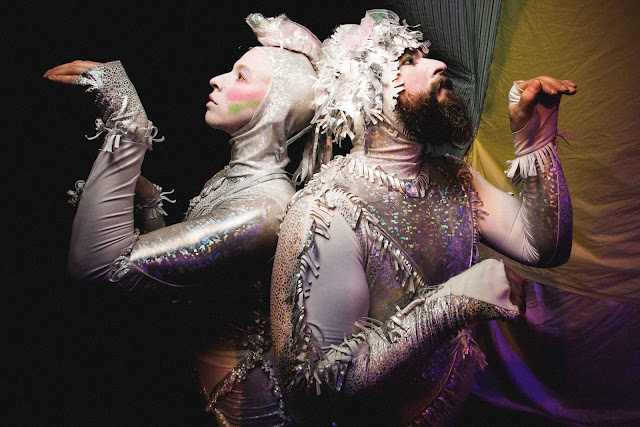 EXTENDED & HIGHLY RECOMMENDED: Caught The? Unicorn? Hour? [Extended!] yet?! Come to the joy womb, a blanket fort for adults to reconnect with their anger issues in the swear square, release their inner child for a play day, and satiate their wanderlust. This show is part group therapy, letting go of personal fears and embracing what makes you happy, and contains surprisingly multilayered depth in the guise of playful silliness. (I was particularly transported back to childhood days since they miraculously found both a clone of my 70's bedroom daisy lamp fixture for the set & a fair replica of the fanlight globes that replaced it!) The Neo-Futurists The? Unicorn? Hour?-The Neofuturists At the Neofuturarium 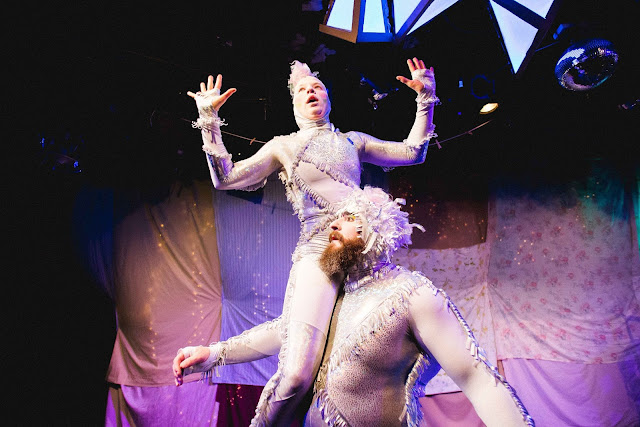 Take a sanity break from the endless fake news and political madness of 2017 and follow these hooded mystics who morph into mythical unicorns, on a journey of self discovery. 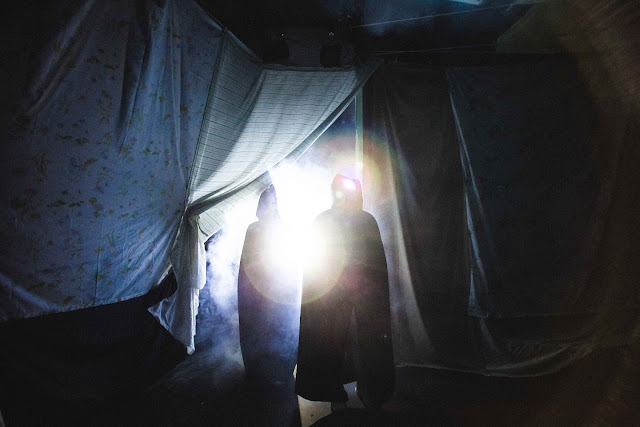 Anthony channels a bearded Bacchus or gracious Greenman, while his real life wife, Leah is all guts and girl power, with the unicorn equivalent of a mohawk, and a pinch of PeeWee Herman just for grins. 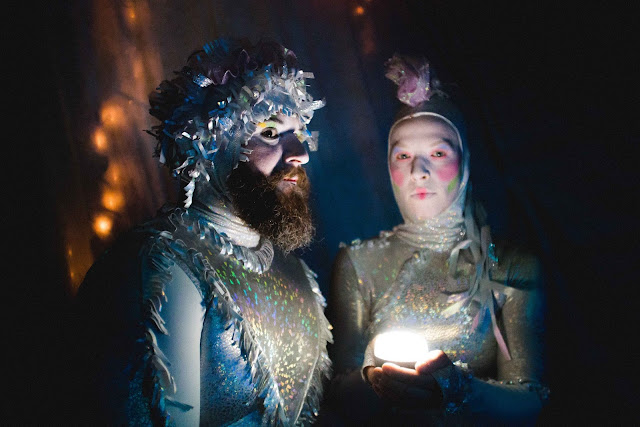 I'm still laughing inside about their tea party, where she manspreads like the worst el offenders, while he sits primly. Hilarious. There's some truly great physical comedy and partner acro here, along with a nonverbal challenge to try something that scares you, get out of your comfort zone, and GO already. Explore, expand, embrace adventure! 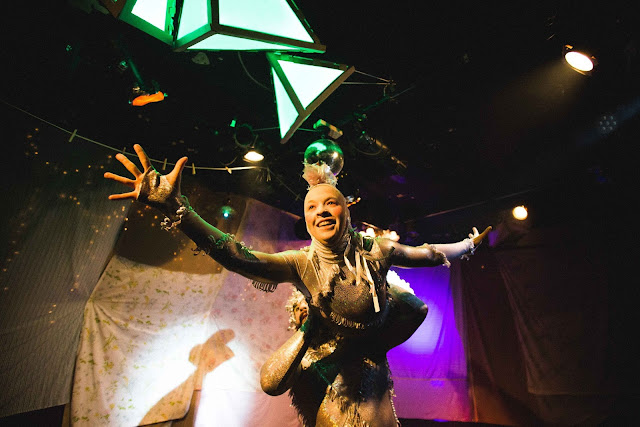 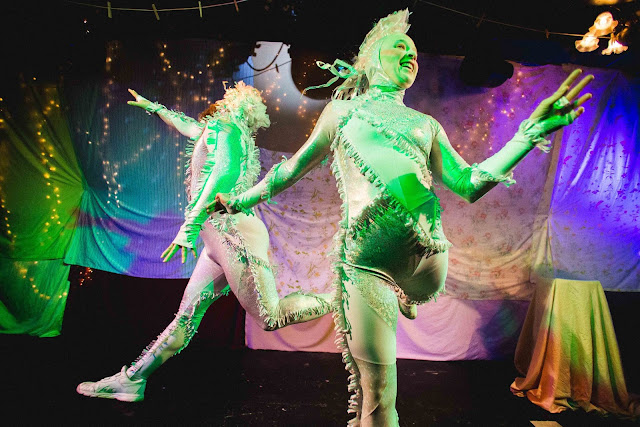 Come along on this epic journey while you still can. Extended through May 20th. Recommended for teens+ to adults of all ages. Highly recommended. I took both of my teens who enjoyed the show immensely. My 14 year old daughter, Sage's recap sums it all up succinctly: "It was weird... but weird good." Don't miss this! 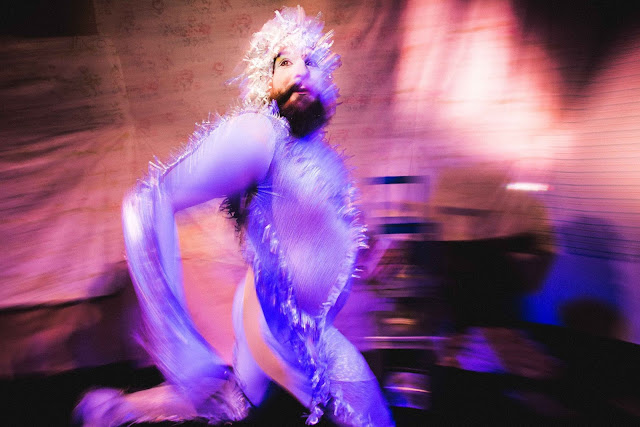 THE NEO-FUTURISTS ARE DOING THEIR JOY HOMEWORK IN THE WORLD PREMIERE OF LEAH URZENDOWSKI AND ANTHONY COURSER’S
THE? UNICORN? HOUR?
APRIL 6 – MAY 20th (extended)

The Neo-Futurists are proud to present a world premiere created and performed by Leah Urzendowski* and Anthony Courser The? Unicorn? Hour?, directed by Adrian Danzig, April 6  - May 20th, at The Neo-Futurarium, 5153 N. Ashland. Previews are Thursday, April 6 - Saturday, April 8 at 7:30 p.m. with opening night Monday, April 10 at 7:30 p.m. Performances run Thursdays – Saturdays at 7:30 p.m. Ticket prices for previews and Thursdays are pay what you can; for the regular run, tickets are $10-25. Tickets and information are available at neofuturists.org or 773.275.5255.

The? Unicorn? Hour? invites the audience to discover and grow in an atmosphere where joy can float freely. Inspired by childhood favorites like “Mr. Rogers’ Neighborhood” and “Peewee’s Playhouse,” this show claims joy as the core fantastical world of adventure within us.  Joy is an active choice, requiring a shift of perception of the world around you.

“We became really obsessed and excited with the politics of joy; joy being an activism; that feeling joy, being joy, creating joy is a way to fight against the world and your oppressor.  Joy is a part of the resistance,” said Leah Urzendowski. “The? Unicorn? Hour? refers to the unicorn that lives within all of us - the mythical magical organ in your soul that can be tapped into at any moment you choose. You can “unicorn” at anytime! Seeking joy is refusing woe and accepting the beauty of an unbridled lifting of the spirit.”

“We want to give people the gift of saying yes and delighting in absurd choices; help people tap back into a time before the word ‘no’ was forced on them. We want to be a looking glass of what a world could look like when we choose to eliminate self-doubt and say yes to a sincere playfulness,” added Anthony Courser.

Leah Urzendowski* is a founding member of The Ruffians, and an ensemble member with The Neo-Futurists since 2011. Some of Urzendowski’s Chicago credits include Jeff recommended Mr. Burns (Theatre Wit); Too Much Light Makes The Baby Go Blind, Miss Neo Pageant, (both with The Neo- Futurists); Burning Bluebeard (The Ruffians); 500 Clown Trapped, 500 Clown Frankenstein, 500 Clown Macbeth (all with 500 Clown); Moby Dick, Dustbowl Gothic ( both with The Building Stage) and Hunchback (Redmoon). Choreography and movement direction credits include The Magic Play (Goodman), Lord of The Flies (Steppenwolf), Ivywild (Hypocrites), Miss Neo Pageant (The Neo-Futurists) and Burning Bluebeard (The Ruffians, The Neo-Futurists).  TV and film credits include “Chicago PD,” “Chicago Fire,” “ER” and “Operator.” Urzendowski is a teaching artist with The Ruffians, The Neo-Futurists and Team Awesome, specializing in physical theatre, ensemble and partnership building, clown, movement and movement consulting. She received her BFA from Chicago College of Performing Arts at Roosevelt University, and is represented by Stewart Talent.

Anthony Courser is a founding member of the Ruffians (2013), an artistic associate with The Neo-Futurists (2012) and a teaching artist with Barrel of Monkeys (2001).  Some of Courser’s favorite Chicago credits include Burning Bluebeard (The Ruffians, The Neo-Futurists); Jeff Recommended Ivywild (The Hypocrites); Daredevils Hamlet, Picked Up, The Fool Returns to His Chair, Daredevils (The Neo-Futurists), That’s Weird, Grandma (Barrel of Monkeys); set designer for Analog (The Neo-Futurists).  He was in the performance ensemble of New Belgium Brewing’s Tour de Fat and the Le Tigre Tent. He is a graduate of Dell Arte International School For Physical Theatre and a student of Panchinko Clowning with Sue Morrison at the Canadian Clown Institute.  Courser is a teacher of clown, Physical Theatre, and Ensemble and Partner Building.  He is also a carpenter, but he doesn’t have time to build you a table.

Adrian Danzig was an early Neo-Futurist (1990) and a founding member of Redmoon Theater, Hubinspoke Theater and is the founding producing artistic director of 500 Clown. His direction/creation credits include Circle of Madness, Action, Not Dead Yet, 500 Clown Get Happy and the earliest versions of 500 Clown Macbeth. Danzig graduated from New York City’s High School of Performing Arts, received his BA from Oberlin College in Government and his MFA from the School of The Art Institute of Chicago in Performance. He has studied clown with Ctibor Turba, Philippe Gaulier, Ronlin Foreman, Dominique Jando, Els Comediants, David Shiner, Avner the Eccentric and was a clown with Big Apple Circus Clown Care for seven years.

The Neo-Futurists are a collective of wildly productive writer-director-performers that create theater that is fusion of sport, poetry and living-newspaper. Having created more than 9,775 plays within 28 years of Too Much Light Makes the Baby Go Blind and over 65 original, full-length productions within their immediate, non-illusory aesthetic. The Neo-Futurists have grown to become one of the most highly regarded experimental theater companies in the United States. From humble beginnings as the first late-night theater production in Chicago, they launched what became Chicago’s longest running show and today sustain multifaceted programs such as Neo-Access, The Kitchen (a micro-festival on art and performance), Prime Time, Neo-Lab and their ongoing late night show 50 weekends every year. For more information visit www.neofuturists.org.

The Neo-Futurists are proud to present a world premiere created and performed by Leah Urzendowski* and Anthony Courser The? Unicorn? Hour?, directed by Adrian Danzig, April 6 - May 13, at The Neo-Futurarium, 5153 N. Ashland. Previews are Thursday, April 6 - Saturday, April 8 at 7:30 p.m. with opening night Monday, April 10 at 7:30 p.m. Performances run Thursdays – Saturdays at 7:30 p.m. Ticket prices for previews and Thursdays are pay what you can; for the regular run, tickets are $10-25. Tickets and information are available at neofuturists.org or 773.275.5255. 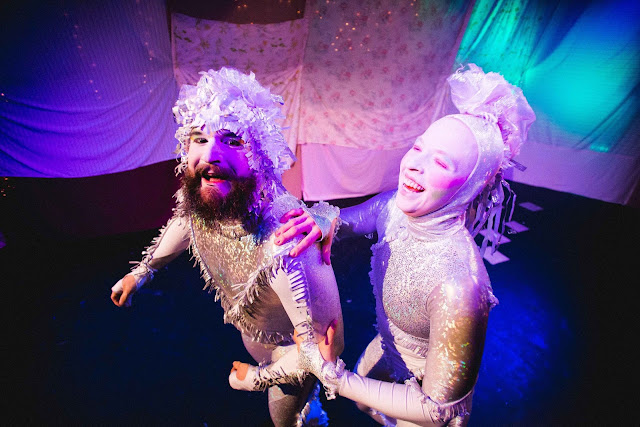 Posted by Bonnie Kenaz-Mara at 8:56 AM No comments: