We can't wait to catch Chicago Shakespeare Theater's next production, the stirring historical drama Red Velvet, staged by Broadway and Chicago director Gary Griffin and starring celebrated Shakespearean actor Dion Johnstone! It's tough to be the first in any field, and we're eager to see the inspirational story of Ira Aldridge come to life on stage.

In 1833 at the Theatre Royal in Covent Garden, Edmund Kean, the greatest actor of his age, collapses on stage while performing the lead in Othello. He is replaced by a young, black American actor, Ira Aldridge—a first for the role on London's West End, sending shockwaves through the streets as a bill promoting the abolition of slavery is debated in Parliament. After breaking barriers on the London stage, Aldridge went on to forge a remarkable decades-long career performing across Europe—garnering acclaim in roles like Shylock, Macbeth, and King Lear. 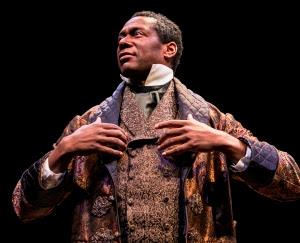 In what is sure to be a career highlight, Dion Johnstone takes on the role of theatrical trailblazer Ira Aldridge across the span of his storied career. Johnstone is celebrated for his portrayals of some of the most demanding roles in Shakespeare’s canon: he has appeared in nine seasons at Canada’s Stratford Festival, and recently made his off-Broadway debut in the title role of Coriolanus. He returns to Chicago Shakespeare after appearing as Marc Antony in Julius Caesar, and Helicanus in Pericles. Now, after having performed the role of Othello twice, Johnstone explores the pivotal figure who made history by taking on the role.

On portraying Aldridge, Johnstone shared, “Ira Aldridge used his platform on the stage to convince European audiences that people of color had souls and intellects as wise and as deep as theirs. His struggle resonates powerfully today—and yet he’s a part of American and European history that has almost been forgotten. It’s a privilege to be able to bring Ira’s voice to life, and I hope this production helps elevate him to the status he deserves.”

Award-winning director of Broadway and Chicago stages Gary Griffin returns to Chicago Shakespeare, where he stages his twenty-fourth production. Griffin’s work has been seen on Broadway in Honeymoon in Vegas, The Color Purple and The Apple Tree. The ten-time Jeff Award winner’s CST directing credits feature a diverse body of work spanning musicals (Gypsy, Road Show, Follies); Shakespeare plays (A Midsummer Night’s Dream, As You Like It); and classics (Private Lives, Amadeus). His landmark production of Pacific Overtures at Chicago Shakespeare went on to the Donmar Warehouse in London, where it garnered the Olivier Award for Outstanding Musical Production and a nomination for Best Director.

A leading lady of Chicago theater, Chaon Cross portrays the legendary stage actress Ellen Tree, who appears as the ill-fated Desdemona opposite Aldridge’s Othello. Cross makes her highly anticipated return to Chicago Shakespeare, where she has memorably appeared as Celia in As You Like It, Sybil in Private Lives, Imogen in Cymbeline and Cressida in Troilus and Cressida. Michael Hayden depicts Charles Kean, an aspiring actor in the shadows of his famous father, Edmund Kean. Hayden notably garnered Olivier and Drama Desk nominations for his portrayal of Billy Bigelow in the Royal National Theatre/Lincoln Center Theatre production of Carousel, and gained acclaim for performing the title roles of Henry V and Richard II in repertory for DC’s Shakespeare Theatre Company.

Collaborators on the Red Velvet creative team are Scenic Designer Scott Davis, Costume Designer Mara Blumenfeld, Lighting Designer Christine Binder, and Sound Designer Chris Kriz. Davis has designed over 25 Chicago Shakespeare productions, including most recently Shakespeare in Love, The Book of Joseph and the Tug of War saga. A four-time Jeff Award winner, Blumenfeld is a frequent collaborator with Griffin, having previously designed King Charles III, Sunday in the Park with George and A Midsummer Night’s Dream at CST. Binder’s designs have graced opera and theatre stages internationally. Kriz has been honored with three Jeff Awards for his Sound Design and original compositions. Award-winning composer and lyricist Jenny Giering creates new music score for the production. Joining Gary Griffin on the directing team is Associate Director Tyrone Phillips, who was named to the Chicago Tribune’s “Hot New Faces of Theater” in 2015. Rounding out the creative team are Dialect Coach Eva Breneman and Fight Choreographer David Woolley.

Red Velvet will be presented in Chicago Shakespeare’s Courtyard Theater, December 1, 2017–January 21, 2018. Single tickets are on sale now for $48–$88 (subject to change). Special discounts are available for groups of 10 or more, as well as CST for $20 tickets for patrons under 35. For more information or to purchase tickets, contact Chicago Shakespeare Theater’s Box Office at 312.595.5600 or visit the Theater’s website at www.chicagoshakes.com.

ABOUT CHICAGO SHAKESPEARE THEATER
A global theatrical force, Chicago Shakespeare Theater (CST) is known for vibrant productions that reflect Shakespeare’s genius for storytelling, musicality of language, and empathy for the human condition. Under the leadership of Artistic Director Barbara Gaines and Executive Director Criss Henderson, Chicago Shakespeare has redefined what a great American Shakespeare theater can be, putting forward a company that delights in the unexpected and defies theatrical category. A Regional Tony Award-winning theater, CST produces acclaimed plays at its home on Navy Pier, throughout Chicago’s schools and neighborhoods, and on stages around the world. In 2017, the Theater unveiled a radical new stage, The Yard at Chicago Shakespeare. Together with the Jentes Family Courtyard Theater and the Thoma Theater Upstairs at Chicago Shakespeare, The Yard positions CST as the city’s most versatile performing arts venue. 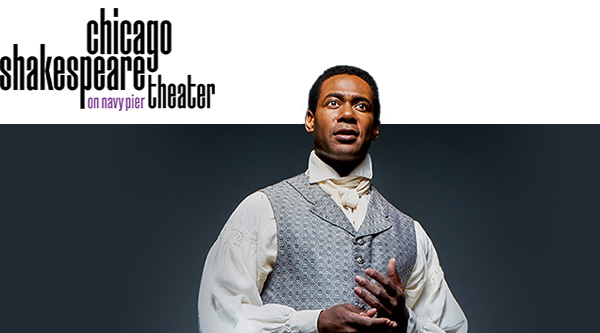 Posted by Bonnie Kenaz-Mara at 10:09 PM No comments: