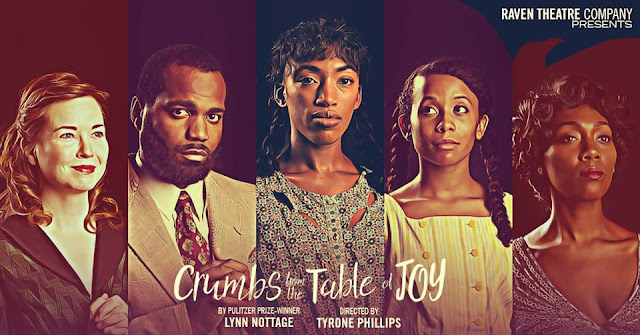 I'll be out for the press performance October 8th, so check back soon for my full review. We're eager to see two-time Pulitzer Prize-winner, Lynn Nottage's period piece set in 1950's Brooklyn.

Raven Theatre is pleased to launch its 2018-19 season with CRUMBS FROM THE TABLE OF JOY by two-time Pulitzer Prize-winner Lynn Nottage, directed by Tyrone Phillips. This sharp and boisterous drama about family, faith and revolution will play October 4 – November 18, 2018 on Raven’s 99-seat East Stage, 6157 N. Clark St. (at Granville) in Chicago. Tickets are currently available at www.raventheatre.com or by calling (773) 338-2177.

Brooklyn, 1950. Ernestine and Ermina Crump have moved to New York with their father, Godfrey, who is seeking spiritual guidance from a man called Father Divine. In the swirling, glamorous commotion of this new city, with calls for equal rights and communist rebellion hanging in the air, the girls begin a turbulent journey toward independence and a challenging future.

Comments Raven Theatre Artistic Director Cody Estle, “Lynn Nottage is a prolific writer and her work is a gift to all who encounter it. This is the first time Raven Theatre has produced one of her plays. As a theatre known for producing the classics of Tennessee Williams and Arthur Miller, it seems only fitting to include Lynn’s voice among these greats. Set in 1950, Crumbs from the Table of Joy examines a family experiencing change in a country filled with racial and social turmoil. Audiences will connect with the struggles of this family, while getting a glimpse into a time in our past whose complexity resembles that of today.”

Every Thursday is “Under 30 Thursday,” when patrons under age 30 can purchase tickets for $15. Single tickets and subscriptions for the 2018-19 Season are currently available at www.raventheatre.com or by calling (773) 338-2177. 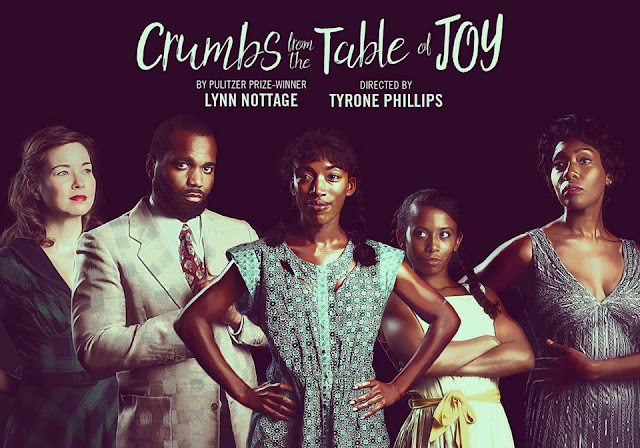 Lynn Nottage (Playwright) received the 2017 Pulitzer Prize for Drama and three Tony Award nominations for her play Sweat. For her play Ruined, she received the 2009 Pulitzer Prize for drama, along with an Obie, the Lucille Lortel Award, New York Drama Critics’ Circle Award, Drama Desk Award, and Outer Critics Circle Award for Best Play (Manhattan Theatre Club, Goodman Theatre). Her other plays include Intimate Apparel (New York Drama Critics’ Circle Award for Best Play; Roundabout Theatre, CENTERSTAGE, South Coast Repertory); Fabulation, Or the Re-Education of Undine (Obie Award; Playwrights Horizons, London’s Tricycle Theatre); Crumbs from the Table of Joy; Las Meninas; Mud, River, Stone; Por’Knockers and Poof! Nottage is the recipient of numerous awards, including the 2007 MacArthur Foundation “Genius Grant,” the National Black Theatre Festival’s August Wilson Playwriting Award, the 2004 PEN/Laura Pels Award for Drama, and the 2005 Guggenheim Grant for Playwriting, as well as fellowships from the Lucille Lortel Foundation, Manhattan Theatre Club, New Dramatists, and New York Foundation for the Arts. She is a member of The Dramatists Guild, an alumna of New Dramatists and a graduate of Brown University and the Yale School of Drama, where she is a visiting lecturer. For additional information, visit www.lynnnottage.net.

Tyrone Phillips (Director) is the founding Artistic Director of Chicago's Definition Theatre Company. Named one of the Chicago Tribune's “Hot New Faces of 2015” and Newcity's “Players 2016: The Fifty People Who Really Perform for Chicago,” he is a graduate of the University of Illinois Urbana-Champaign where he received his BFA with honors. Directing credits include the critically-acclaimed production of Byhalia, Mississippi (Joseph Jefferson Awards nomination), which remounted to open the Steppenwolf 1700 Theatre, Dutchman (Definition Theatre), The MLK Project: The Fight for Civil Rights (Writers Theatre), 33 to Nothing (A Red Orchid Theatre), Dontrell, Who Kissed The Sea (Illinois Theatre), We the People, Our Town, Lord of the Flies, The Tempest (Niles North Theatre). You also may have seen his work as associate director for Red Velvet (Chicago Shakespeare Theatre) and as the assistant director for Trevor the Musical, Parade and The Mystery of Love and Sex (Writers Theatre). Tyrone also studied abroad at Shakespeare’s Globe and was an emerging professional resident at the Milwaukee Repertory Theatre where he worked on A Raisin in the Sun, The Mountaintop, and Clybourne Park. Tyrone is represented by Grossman and Jack Talent and was recently selected as one of Newcity's “Players—the 50 leaders of Chicago’s theater, dance, opera and comedy culture of 2018”.

Quill Reading Series
Raven Theatre will present a staged reading of POOF! by Lynn Nottage, directed by Wardell Julius Clark on Wednesday, November 14 at 7:30 pm (reception at 7 pm). Quill is a series of four staged readings produced in tandem with each of the plays in Raven’s season. The readings provide an opportunity for audiences to engage further with the work of this season’s playwrights and explore their artistic voice on stage. Each Quill reading features a pre-show reception with complimentary wine provided by Income Tax. Admission is a suggested donation of $10. 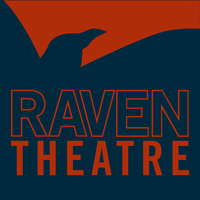 Raven Theatre Company is funded in part by the Alphawood Foundation, Bayless Family Foundation, The MacArthur Fund for Arts and Culture at Prince, Polk Bros. Foundation, S&C Electric Company Fund, The Gaylord and Dorothy Donnelley Foundation, the PAV Fund and the Illinois Arts Council, a state agency.
Posted by Bonnie Kenaz-Mara at 1:12 PM No comments: