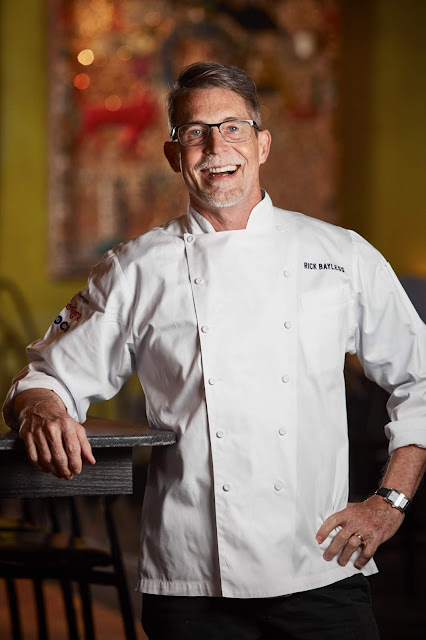 
“Boys in the Band” to Begin Performances Jan. 29; “Every Brilliant Thing” Continues through Dec. 8

Despite the long lead time on this opening, slated for 2021, we're beyond excited for this collaboration and can't wait to share the news with our readers!
I adored Rick Bayless in Cascabel: Dinner – Daring – Desire, a circus/theatre/fine dining extravaganza that was too much fun. I'm overjoyed to hear there will soon be another Chicago based theatre/Bayless world premiere.

Windy City Playhouse Artistic Director Amy Rubenstein announced that the theater will be collaborating with James Beard Award-winning chef Rick Bayless on a yet-to-be-named theatrical project to be presented at Windy City Playhouse’s flagship location in the first quarter of 2021. Bayless, Rubenstein and Associate Artistic Director Carl Menninger are teaming up to create a fully immersive theatrical, culinary farce; audiences will enjoy special tastes crafted by Bayless as the hilarity unfolds. The story revolves around a special event at a well-known restaurant where everything that could possibly go wrong occurs, sending the restaurant staff into a tailspin. A drunk chef, a couple in crisis, a dishonest health inspector and a spy from a competing restaurant all contribute to chaos with hysterical results.

Windy City Playhouse’s production of Duncan MacMillan’s “Every Brilliant Thing,” starring Rebecca Spence and directed by Jessica Fisch, opened last week to rave reviews. In the Chicago Tribune, Chris Jones awarded the production four stars, calling it “a really beautiful, kind and lovable little show that, in the 72 hours since I left the theater, has buoyed me, amused me, warmed me and challenged me.” Writing for the Chicago Sun-Times, Kris Vire called the show “breathtaking,” adding that it reminds “us to take stock of joy and possibility and human kindness.” Kerry Reid, reviewing for The Reader, wrote “when it comes to making us all feel welcome and valued, this show is, well, brilliant.” And reviewing for WTTW-TV, Hedy Weiss wrote “Windy City has proven itself to be a master of ‘immersive theater,’ a theatrical form that heightens the interplay between actors and audience, and cleverly removes ‘the fourth wall,’ that traditional ‘boundary’ between performer and spectator. ‘Every Brilliant Thing’ is its latest marvel.” Tickets for “Every Brilliant Thing” are now on sale through Dec. 8.

Windy City Playhouse’s production of Leslie Liautaud’s “Southern Gothic” will complete its Chicago run Sunday, Oct. 27, having played 20 months (originally opening Feb. 14, 2018). At the conclusion of its run, the play will have been seen by 14,000 audience members, will have employed more than 100 artists and served up more than 250 cans of Spam and 2,310 Twinkies. The theater’s production of Jonathan Caren’s “The Recommendation” will close Sunday, Oct. 20, having played 111 performances, and dispensing 2,400 Jello shots and the contents of 24 family-size bags of wonton chips.

Next up will be an immersive production of Mart Crowley’s revolutionary play, “The Boys in the Band” directed by Playhouse Associate Artistic Director Carl Menninger, beginning January 29, 2020. Set in 1968, the play is set at the birthday party of Harold, who is turning 32. Luckily, friend-enemy Michael is there with six mutual friends to help him ease into his early 30s. The party is all jokes and catty quips until the host proposes a playful game of truth or dare. What happens when you put eight complicated gay men - out, closeted, flamboyant, or "passing" - in one room with all their grudges? On the heels of the recent hit Broadway revival, this landmark play comes to Chicago for the first time in 20 years. In the signature Windy City Playhouse style, audience members will sit inches from the prototype personalities during the pre-Pride era.  Reviewing the recent revival, Dave Quinn of People raved “If there were ever a time to revisit ‘The Boys in the Band,’ it’s now.” Tickets go on sale Friday, Nov.1; the press performance will be announced at a future time.

“I am proud to say that Windy City Playhouse has found its stylistic groove,” said Rubenstein. “For a theater company to be successful in a city as competitive as Chicago, it must establish a unique voice. I feel that we have audiences have come to expect something truly unique when they visit our theater, an experience where they truly become involved in the action not as a passive observer, but where they are almost a participant. Our guests tell me that they know that every production will deliver something completely different but always exciting, thought-provoking and moving. Our upcoming productions will continue in that vein.”

About Rick Bayless
Most people know Rick Bayless from winning the title of Bravo’s “Top Chef Masters,” besting the competition with his authentic Mexican cuisine. His highly rated public television series, “Mexico: One Plate at a Time,” is broadcast coast to coast and his nine cookbooks have earned multiple high-profile accolades. Located in Chicago, Bayless’ Frontera Grill and Topolobampo have each received the “Outstanding Restaurant” designation from the James Beard Foundation — an unprecedented feat for side-by-side restaurants. His wildly popular fast-casual Xoco has been around since 2009 and Tortas Frontera at Chicago’s O’Hare airport has changed the face of airport dining.

Always a philanthropist, Bayless and his staff established the Frontera Farmer Foundation in 2003 to support small Midwestern farms. To date, the Foundation has awarded nearly 200 grants totaling more than $2 million. He also launched the Frontera Scholarship, a culinary school scholarship for Mexican-American students in Chicago. The Government of Mexico has bestowed on Bayless the Mexican Order of the Aztec Eagle–the highest decoration bestowed on foreigners whose work has benefitted Mexico and its people.

About Windy City Playhouse
Windy City Playhouse is a professional theater and 501(c)(3) nonprofit organization, located on Chicago's northwest side. Premiering in March of 2015 with a mission to present contemporary, relevant, and approach art, the Playhouse has quickly become a mainstay of the Chicago theater scene. In 2018, its runaway hit, the immersive “Southern Gothic” solidified the Playhouse as the first choice in Chicago theater for one-of-a-kind audience experience. "Experience driven. Audience first."