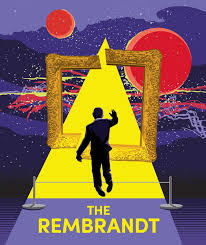 
Here at ChiIL Live Shows, we've enjoyed Hallie Gordon's directing prowess for years. With Francis Guinan and John Mahoney in the leads this is sure to be intriguing. We can't wait to see Steppenwolf's artful opener, The Rembrandt.

Previews begin September 7, opening is September 17 and the show has already been extended through November 5 due to popular demand. The Rembrandt takes place in Steppenwolf’s Upstairs Theatre, 1650 N Halsted St. Press performances are September 17 and 19. Single tickets ($20 - $99) are available through Audience Services at 312-335-1650 or steppenwolf.org.

When a museum guard decides to touch a famous Rembrandt painting, a remarkable journey across the ages ensues. Spanning centuries of human experience, Jessica Dickey’s The Rembrandt movingly explores the power of creative expression and the sacrifices we make in the pursuit of love and beauty, reminding us that though our beliefs may die with the sound of our voice, it’s the love we share—and the art that love inspires—that finds eternity.

Director Hallie Gordon shares, “The Rembrandt asks you step into the painting and its different worlds. What we find is beauty and meaning in the understanding that no matter where we are, art allows us to unravel the mysteries of being. It could be in a temple or it could be in a dark apartment. We are all attracted to and seeking after that elemental spark of genius, and ultimately that which we leave behind.”

In regards to her process playwright Jessica Dickey shares, “Researching the world of museum guards was a fascinating window into a very particular subculture. The result is an examination of the eternal and the ephemeral that is funny, surprising and filled with yearning. The Rembrandt explores how encountering a work of art can be practice for the real thing—really seeing one another.” 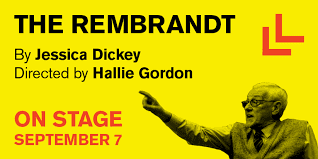 Jessica Dickey is an award-winning actor and playwright most known for her play, The Amish Project, which opened Off-Broadway at the Rattlestick Playwrights Theater (Helen Hayes Award, Barrymore Award, among others). The Rembrandt was commissioned and produced (then titled The Guard) by the Ford’s Theatre as part of the Women’s Voices Festival and was awarded the Stavis Award for Playwriting.

Hallie Gordon is an Artistic Producer at Steppenwolf and the Artistic Director for Steppenwolf for Young Adults, where she has directed many productions for the program including Monster by Walter Dean Myers; George Orwell’s 1984 and Animal Farm; The Book Thief; To Kill a Mockingbird; and the world premiere of Toni Morrison’s The Bluest Eye. She’s also directed for Northlight Theatre and is an ensemble member for Rivendell Theatre where she directed the critically acclaimed Dry land and Eat Your Heart Out. Most recently for Steppenwolf, she directed Taylor Mac’s Hir, now playing through August 20, 2017.

About the Cast & Creative Team
Ensemble member Francis Guinan has appeared in more than 30 shows, currently in Taylor Mac’s Hir. Ensemble member John Mahoney also has appeared in more than 30 Steppenwolf productions, most recently The Herd, The Birthday Party and The Seafarer. Mahoney won a Tony Award for his performance in The House of Blue Leaves and is well-known for his role on the hit TV series, Frasier. Ty Olwin is a graduate of the School at Steppenwolf, currently in Taylor Mac’s Hir and was in Steppenwolf for Young Adults’ productions of The Burials and Lord of the Flies. Olwin was featured in the 2016 film Personal Shopper starring Kristen Stewart. Karen Rodriguez is making her Steppenwolf debut, and was recently featured in the solo show The Way She Spoke: A Docu-Mythologia at the Greenhouse Theatre and Hookman at Steep Theatre. Gabriel Ruiz is a graduate of the DePaul Theatre School and an ensemble member of Teatro Vista. Previous Steppenwolf Theatre Company credits include How Long Will I Cry?, Motherfucker with the Hat and The Way West. He has appeared in the TV series Boss, Chicago Fire and Chicago Justice.

Group Tickets: all groups of 10 or more receive a discounted rate for any performance throughout the season; steppenwolf.org/groups.

Classic Subscription Memberships offer 7-Play Packages securing dates and seats for the full Steppenwolf experience, as well as Create-Your-Own Packages with 5 or 6 plays. Perks include discount prices, easy and free exchanges and more. Black Card Memberships are for audiences interested in extreme flexibility with six tickets for use any time for any production. Black Card ticket credits are valid for one year with the option to add additional tickets as needed. Perks include easy and free exchanges, access to seats before the general public, savings on single ticket prices and bar and restaurant discounts for pre- and post-show socializing. Red Card memberships are available for theatergoers under 30. To purchase a Card Membership, visit Audience Services at 1650 N Halsted St, call 312-335-1650 or visit steppenwolf.org.

Accessible performances include an American Sign Language interpretation on Sunday, October 1 at 7:30pm, Open Captioning on Saturday, October 7 at 3pm and a Touch Tour on Sunday, October 15 at 1:30pm. For more information, visit steppenwolf.org/access. Assistive listening devices and large-print programs are available for every performance. An induction loop is installed in the Downstairs Theatre and the 1700 Theatre.

Front Bar: Coffee and Drinks
Connected to the main lobby is Steppenwolf’s own Front Bar: Coffee and Drinks, offering a warm, creative space to grab a drink, have a bite, or meet up with friends and collaborators, day or night. Open daily from 8am to midnight, Front Bar serves artisanal coffee and espresso is provided by La Colombe and food prepared by Goddess and Grocer. The menu focuses on fresh, accessible fare, featuring grab-and-go salads and sandwiches for lunch and adding shareable small plates and desserts for evening and post show service. www.front-bar.com

Sponsor Information
Northern Trust is a sponsor on The Rembrandt. United Airlines is the Exclusive Airline of Steppenwolf and ComEd is the Official Lighting Sponsor for the 17/18 season.

Steppenwolf Theatre Company is the nation’s premier ensemble theater. Formed by a collective of actors in 1976, the ensemble has grown to 49 members who represent a remarkable cross-section of actors, directors and playwrights. Thrilling and powerful productions from Balm in Gilead to August: Osage County—and accolades that include the National Medal of Arts and 12 Tony Awards—have made the theater legendary. Steppenwolf produces hundreds of performances and events annually in its three spaces: the 515-seat Downstairs Theatre, the 299-seat Upstairs Theatre and the 80-seat 1700 Theatre. Artistic programing includes a seven-play season; a two-play Steppenwolf for Young Adults season; Visiting Company engagements; and LookOut, a multi-genre performances series. Education initiatives include the nationally recognized work of Steppenwolf for Young Adults, which engages 15,000 participants annually from Chicago’s diverse communities; the esteemed School at Steppenwolf; and Professional Leadership Programs for arts administration training. While firmly grounded in the Chicago community, nearly 40 original Steppenwolf productions have enjoyed success both nationally and internationally, including Broadway, Off-Broadway, London, Sydney, Galway and Dublin. Anna D. Shapiro is the Artistic Director and David Schmitz is the Executive Director. Eric Lefkofsky is Chair of Steppenwolf’s Board of Trustees. For additional information, visit steppenwolf.org, facebook.com/steppenwolftheatre, twitter.com/steppenwolfthtr and instagram.com/steppenwolfthtr.
Posted by Bonnie Kenaz-Mara at 7:13 PM No comments: