OPENING: 106th Mainstage Revue at The Second City This Month

The Second City Announces Casting For
The 106th Mainstage Revue 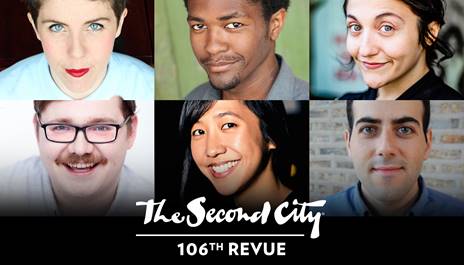 ChiIL Live Shows will be out for the press opening October 26th, so check back soon for our full review. I fell in love with Chicago style improv in high school, when I first took a class through my school. I went on to found, perform with, and direct Tower Players Improv Troupe at Miami University in Oxford, OH during 3 of my undergrad years. The troupe went on to last over 20 years. Now I'm on the audience side of the stage, and love reviewing shows of every conceivable genre, all over town, but it's fun to come back to those improv and comedy roots.

In one of the comedy industry’s most anticipated traditions, iconic Chicago comedy institution The Second City is proud to announce the cast of their upcoming 106th Mainstage revue, set to open in October, 2017.

The all-new show will be written and performed by second-time cast member Kelsey Kinney and new cast members Ryan Asher, Tyler Davis, Jeffrey Murdoch, Tien Tran, and Nate Varrone, Jeff Award winner Ryan Bernier returns to direct his sixth resident show. Vinnie Pillarella will follow up his turn as music director for the current Mainstage production, as will longtime stage manager Craig Taylor, who has been at the technical helm of shows featuring legendary alumni including Chris Farley, Tina Fey, and Stephen Colbert over the course of his storied career at The Second City.

The Second City is located at 1616 N. Wells Street, Chicago.

About the Artists
RYAN ASHER (Ensemble) is from Charlottesville VA, and received her BFA in theater performance at Virginia Commonwealth University. Ryan was a member of The Second City Touring Company and appears this summer in The Second City's Almost Accurate Guide to America: Divided We Stand at the Kennedy Center in Washington, D.C. She also performs with improv groups around Chicago, including Trigger Happy and SHEBEAST.

TYLER DAVIS (Ensemble) is a Columbus, Ohio, native and has performed with The Second City Touring Company, as well in in The Second City's Almost Accurate Guide to America: Divided We Stand at the Kennedy Center. He also performs with improv groups around Chicago, including Devil’s Daughter and Trigger Happy.

JEFFREY MURDOCH (Ensemble) was born and raised in the Metro Detroit area and attended the University of Michigan. Over the last eight years, he has performed at the Upstairs Gallery, iO, The Annoyance, and was a member of The Second City Touring Company.

TIEN TRAN (Ensemble) is graduate of Boston College, a 2016 Second City Bob Curry Fellow, and has most recently been performing in The Second City’s 41st e.t.c. revue, Fantastic Super Great Nation Numero Uno. Prior to her time on Second City’s resident stage, she toured with The Second City and Slate’s Unelectable You. As a stand-up, she’s performed throughout the city and was featured at the 2016 Second City NBCUniversal Break Out Comedy Festival and SCOUT Festival.

NATE VARRONE (Ensemble) is from Columbus, Ohio, and attended The Ohio State University. He has performed with The Second City Touring Company, at iO, with Crab Atlanta, and is a cast member of Holy F*** Comedy Hour at The Annoyance.

VINNIE PILLARELLA (Musical Direction, Original Music, Sound Design) is a Chicago native and is the current musical force behind The Second City’s 105th Mainstage revue, The Winner…of Our Discontent. A veteran of The Second City Touring Company, Vinnie has also created music in theaters around the city, including The Annoyance, iO, Public House, and Silk Road Rising.

CRAIG TAYLOR (Stage Manager) has stage managed more than 35 revues for The Second City and has been asked to provide the impossible for numerous Second City directors.

Posted by Bonnie Kenaz-Mara at 8:28 AM No comments: