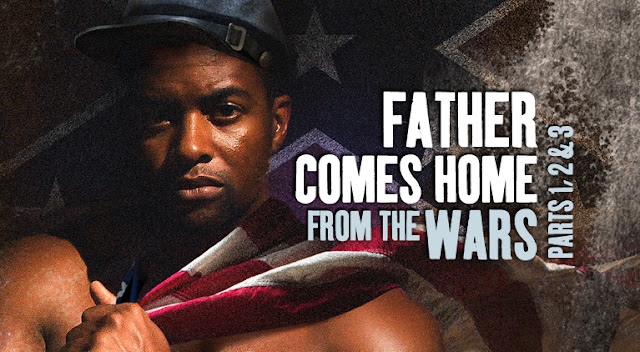 Goodman Theatre announces the cast and creative team for the Chicago premiere of Father Comes Home From the Wars (Parts 1, 2 & 3) by Pulitzer Prize winner Suzan-Lori Parks, directed by Niegel Smith. Parks, in her “finest work yet” (New York Times), serves up “an American story as much about our present as it is about our past” (Los Angeles Times). Filled with wit, poetry and original music composed by Grammy Award winner Justin Ellington and performed on stage nightly by Chicago native blues musician Melody Angel, the production follows Hero (Kamal Angelo Bolden), a Texas slave, who faces a simple yet monumental choice: join his master in the Confederate army to win his freedom—or remain enslaved at the plantation.

“The Goodman has brought together a stellar cast to interpret Suzan-Lori Parks’ masterwork,” said Director Niegel Smith, Artistic Director of New York’s The Flea Theater and a former fellow at The Public Theater during the play’s development and 2014 world premiere production. “I’m excited to create, with these actors, a panoply of enslaved folks—joyful, fearful, nurturing, overwhelmed and yet resilient. This is a necessary work, one of black love, black joy and black pain. We need plays like this that look deeply at our history, and how we continue to perpetuate it. I am thrilled by artists like Suzan-Lori who make it part of their work to give us these stories in which we investigate truthfully.”
Smith’s cast also features William Dick as Colonel; Aimé Donna Kelly as Penny, Hero’s devoted love; Jaime Lincoln Smith as Homer, whose rivalry with Hero is defined by a betrayal. Rounding out the cast are Sydney Charles (Second), Ronald L. Conner (Third), Bernard Gilbert (Runaway), Nicole Michelle Haskins (Runaway), Ernest Perry Jr. (The Oldest Old Man), Tyrone Phillips (Runaway), Michael Aaron Pogue (Fourth), BrittneyLove Smith (Odyssey Dog), Demetrios Troy (Smith) and Jacqueline Williams (Leader). The creative team also includes Courtney O’Neill (set), Linda Cho (costumes) and Keith Parham (lighting).

In addition, Chicago-based blues musician Angel makes her Goodman Theatre debut as a contemporary narrator who comments on the circumstances and setting to direct the audience’s focus.

“I consider Suzan-Lori Parks a super hero, and to have my theatrical debut in one of her plays at one the best theaters in the world is an honor,” said Angel, who kicks off the Chicago Blues Festival performing the national anthem on Friday, June 8. “Father Comes Home From the Wars is a story about choices and how one decision can either lead you or change you completely. In my own music, I live by a quote from Nina Simone, ‘it's an artist's duty to reflect the times in which we live.’ This is what this role has given me through the music Suzan-Lori created—an opportunity to reflect the times.”

Suzan-Lori Parks (Playwright) was named one of Time magazine’s “100 Innovators for the Next New Wave” in 2002, Parks was the first African American woman to receive the Pulitzer Prize in Drama for her Broadway hit Topdog/Underdog. A MacArthur “Genius” Award and Gish Prize recipient, she has also been awarded grants by the National Endowment for the Arts, the Rockefeller Foundation, the Ford Foundation, the New York State Council on the Arts and the New York Foundation for the Arts. Her play Father Comes Home From the Wars (Parts 1, 2, & 3) made its world premiere at The Public Theater in New York, followed by a run at American Repertory Theatre in Cambridge, MA, and Center Theatre Group in Los Angeles. The play was named a finalist for the 2015 Pulitzer Prize for Drama and was awarded the 2015 Edward M. Kennedy Prize for Drama Inspired by American History, as well as the 2014 Horton Foote Prize. Parks’ work on The Gershwin's Porgy and Bess was honored with the 2012 Tony Award for Best Revival of a Musical. Her numerous plays include The Book of Grace, In the Blood (2000 Pulitzer Prize finalist), Venus (1996 Obie Award), 365 Days/365 Plays and The Death of the Last Black Man in the Whole Entire World, among others. Parks’ novel Getting Mother's Body was published by Random House. Her first feature-length screenplay was Girl 6, written for Spike Lee. She’s also written screenplays for Brad Pitt, Denzel Washington and Jodie Foster, as well as adapting Zora Neale Hurston’s classic novel Their Eyes Were Watching God, which premiered on ABC’s Oprah Winfrey Presents. Parks is currently writing an adaptation of the film The Harder They Come for a live stage musical. She is the master writer chair at The Public Theater, A Residency One playwright at Signature Theatre and serves as a professor in dramatic writing at New York University’s Tisch School of the Arts.

AMERICA’S “BEST REGIONAL THEATRE” (Time magazine), Goodman Theatre is a premier not-for-profit organization distinguished by the excellence and scope of its artistic programming and civic engagement. Led by Artistic Director Robert Falls and Executive Director Roche Schulfer, the theater’s artistic priorities include new play development (more than 150 world or American premieres), large scale musical theater works and reimagined classics (celebrated revivals include Falls’ productions of Death of a Salesman and The Iceman Cometh). Goodman Theatre artists and productions have earned two Pulitzer Prizes, 22 Tony Awards, over 160 Jeff Awards and many more accolades. In addition, the Goodman is the first theater in the world to produce all 10 plays in August Wilson’s “American Century Cycle” and its annual holiday tradition A Christmas Carol, which celebrated its 40th anniversary this season, has created a new generation of theatergoers. The Goodman also frequently serves as a production partner with local off-Loop theaters and national and international companies by providing financial support or physical space for a variety of artistic endeavors.