OPENING: The Midwest Premiere of COSMOLOGIES Via The Gift Theatre Through December 9, 2018 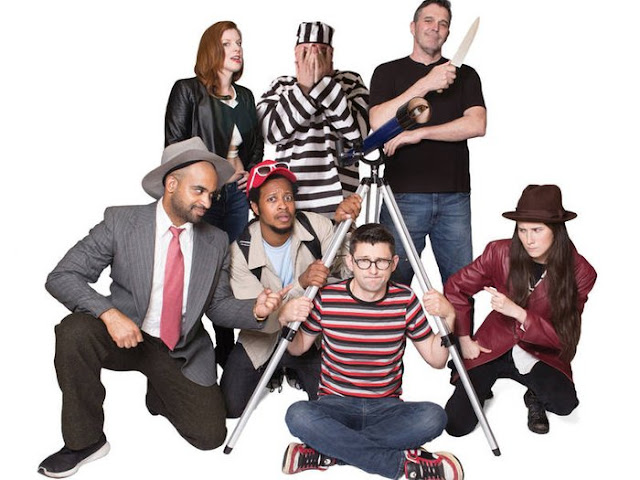 Put the whimsical humor of the Keystone Cops and Bugs Bunny into a particle collider with the philosophy of Soren Kierkegaard and George Berkeley and you’re getting close to the style of this existential absurdist comedy from David Rabe. When a young man’s negotiation for a date goes very wrong, we are transported through kaleidoscopic worlds of possibilities, identities and loves.

Comments playwright and Gift ensemble member David Rabe, “Here's the thing: working on Good for Otto with The Gift was among the very best experiences I've ever had in the theater. Cosmologies and I are eager to get there and go at it again with Mike Thornton, some of the same actors, along with new ones drawn from the Gift ensemble.”

David Rabe (Playwright) was born in Dubuque, Iowa, where he lived though his college years, studying creative writing under Reverend Ray Roseliep, a renowned poet. After the army and a gloriously productive period at Villanova University where a number of his early plays were written and performed, his first professional productions were in New York, a Vietnam Quartet starting in 1971: The Basic Training of Pavlo Hummel, Sticks and Bones, The Orphan and Streamers. All were produced by Joseph Papp to whom he owes a complex and absolute debt. In the Boom Boom Room followed, as did Goose and Tom Tom, Hurlyburly, Those the River Keeps, A Question of Mercy, The Dog Problem, The Black Monk adapted from Chekov, An Early History of Fire and Good For Otto, which in 2015 gave him his first experience of Chicago theater with The Gift, followed by Visiting Edna at Steppenwolf. Four of his plays have received Tony nominations, and Sticks and Bones, for which the actors requested combat pay, won in 1972. He has received the American Academy of Arts and Letters Award, and an Obie award; the Drama Desk, John Gassner Outer Critics, the New York Drama Critics Circle awards, and three times won the Elizabeth Hull-Kate Warriner Drama Guild Award. Screenplays are I’m Dancing as Fast as I Can, Casualties of War and Hurlyburly. His fiction includes the book of stories A Primitive Heart, and the novels Recital of the Dog, Dinosaurs on the Roof and Girl by the Road at Night.  He has three children, Jason, Lily and Michael.

SAVE THE DATES: THE GIFT THEATRE ANNOUNCES 2018 SEASON

The Gift Theatre also announces the addition of five artists to their ensemble: Evan Michael Lee, Chika Ike, Martel Manning, Gregory Fenner, and Hannah Toriumi. The ensemble is composed of actors, directors, writers and improvisers. For 16 years, The Gift Theatre has earned and deepened its reputation as an ensemble dedicated to acting of the highest caliber and a welcome home for new plays.

“Who are we? From the individual level to the national, we are in the midst of a vital articulation of Identity,” Thornton said. “We believe theatre can help orient and navigate people through a life which often contains multitudes of pain and struggle. And yet, the resolve to continue to struggle can define us; giving us, even, perhaps, in the act, a kind of grace. The 2018 Season lives under the aesthetical canopy of Absurdism, wherein characters who struggle to find meaning in life nevertheless continue to pursue meaning. Today, we are also deeply honored and excited to announce an enrichment of our ensemble. Evan, Chika, Martel, Gregory, and Hannah are artists of virtuosic talents with whom we have collaborated over the years in joy and awe. In short, we love them. They have each played a defining role in The Gift’s history and now, as ensemble members, our future.”

As usual, The Gift's year begins in January with TEN (January 5-14), the theater's annual celebration of world premiere ten-minute pieces by The Gift and guests, sponsored by Revolution Brewing.

February 9–April 8, 2018
HANG MAN (world premiere)
by Stacy Amma Osei-Kuffour, directed by ensemble member Erica Weiss
The community of a backwoods Southern town grapples with the murder of a Black man who is found hanging in a tree. As events unfold, the hanging mystifies the people of the community, forcing them to confront their complicity in this man’s horrific demise. Osei-Kuffour’s darkly comical, heartbreaking play, which recently made the prestigious 2017 Kilroy’s List, uses absurdity to explore racism, sexuality, and the parts of American history we would all like to forget.

June 1–July 29, 2018
HAMLET, by William Shakespeare, directed by Monty Cole
After the death of his dad, a young black man named Hamlet returns home to grieve and seek revenge. Fighting against the injustice of his father's murder and the powers that want him out of the picture, Hamlet quickly loses power and sanity. Directed by guest artist Monty Cole, The Gift's retelling of Shakespeare's great tragedy will crack open the mind of one of western drama's most fascinating and entertaining characters.

October 12–December 9, 2018
COSMOLOGIES (Midwest premiere)
by ensemble member David Rabe, directed by artistic director Michael Patrick Thornton
Put the whimsical humor of the Keystone Cops and Bugs Bunny into a particle collider with the philosophy of Soren Kierkegaard  and George Berkeley and you’re getting close to the style of this existential absurdist comedy from David Rabe. When a young man’s negotiation for a date goes very wrong, we are transported through kaleidoscopic worlds of possibilities, identities, and loves.

Season subscriptions are available for as little as $75. The Gift subscribers ("Gifters") receive admission to three shows, free parking at Gale Street Inn, free admission to all Wednesday night “Natural Gas” improv shows and invitations to special subscriber-only special events. Subscribe at http://thegifttheatre.org/ or call 773-283-7071.
Posted by Bonnie Kenaz-Mara at 2:41 PM No comments: