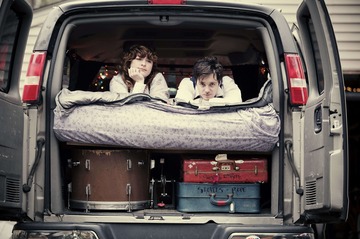 "Cary Ann Hearst and Michael Trent were
solid singers and songwriters on their own,
but the pairing is truly a thing of magic...”
– Filter

This week, NPR featured Shovels & Rope in Five New Faces Of Folk saying, "On stage, South Carolina singer-songwriters Cary Ann Hearst and Michael Trent are geysers of goodwill: The husband-and-wife duo's chemistry and ramshackle playfulness make them difficult to resist. But listen to "Hail Hail," from last year's O' Be Joyful, and you'll also hear musicians for whom a smile is just one way to bare one's teeth."

The electrifying road warriors are making their debut on the major festival circuit this year, beginning with a thrilling performance at Coachella to which the New York Times said, “Of all this afternoon’s young bands, they were the softest, but they might make the loudest crash.” They won over fans at Sasquatch, Hangout, Wakarusa, & Forecastle festivals, with upcoming festival appearances scheduled at Newport Folk Festival, Austin City Limits, Voodoo Experience.

Shovels & Rope just wrapped an opening tour for Dawes with select opening shows for Dave Matthews Band. In September, the duo will hit the road for the remainder of 2013 on a headlining tour. For tour dates and more info, visit: http://www.shovelsandrope.com/

Posted by Bonnie Kenaz-Mara at 10:02 AM No comments: