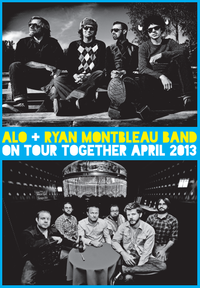 ChiIL Live Shows had the chance to interview ALO and catch them at Summer Camp Music Festival.   They had some sweet insights for our long running interview series on How Creatives Parent & How Parents Create.

They also kicked us a press download of their latest album, Sounds Like This that we've been enjoying and intrigued by this past year.

Check 'em out live this Saturday 4/20 at Double Door!


With its delightfully vibrant blend of inventive musicality and genre-blurring reach, Sounds Like This sees ALO operating with fresh verve and vitality, their always-kaleidoscopic funk pop n roll aglow with exceptionally ebullient songcraft and deliriously danceable grooves. The California-based band’s fourth Brushfire Records release showcases their unfettered passion, wit, and imagination while simultaneously exploring hitherto uncharted musical terrain. Invigorated by an unstructured approach to the studio process, ALO have accessed new avenues of resourcefulness, resulting in a truly distinctive collection of songs that adroitly captures all the glorious ingenuity and adventure of the band’s legendary live sets.

Long acclaimed for their deft musicianship, potent songwriting, and astonishing on-stage interaction, the members of ALO have played together for more than two decades, with the current permutation now in its 10th year and counting. The band followed the release of 2010′s Jack Johnson-produced Man Of The World by doing what they do best: playing live, with highlights including the Halloween-themed “Haunted Carnival of Traveling Freaks & Frights” tour and their annual Tour d’Amour benefitting public music school programs.

In April 2011, ALO convened at San Francisco’s Mission Bells studio with no plans other than to make some music together. With studio owner/longtime collaborator David Simon-Baker assisting behind the board, the band opted to take the same improvisational tack towards recording as they do on stage. Any distinctions between pre-production and real recording would be shed, allowing for ALO’s instinctive spontaneity to make it to track.

“We thought, what if we started recording from the get-go,” Gill says, “instead of rehearsing, making songs, and then going into the studio. We decided to start the whole process all at once, with the intention of wanting things to feel really live.”

“Without a clear roadmap, we hit a lot of dead ends,” says drummer Dave Brogan says, “which forced us to create our way out of the morass. I think that helped us look to within ourselves,rather than outside influences, to bring the music to life.”

The band , all based in the Bay Area, Gill, who resides in sunny Santa Barbara, were also able to utilize a lifetime’s bag of tricks in a way the previous album’s sonic scope only suggested.

“The previous record was done in Hawaii, so we simply couldn’t fly with much,” bassist Steve Adams says. “Doing this one in San Francisco definitely made it easier to bring anything we wanted from home, Dave set up a more elaborate drum zone, Lebo had more guitars and amps, Zach brought up more keyboards. I had all my basses and a keyboard rig as well. Having a broader palette of sounds definitely had an influence on how the record turned out.”

In the past, ALO felt compelled to adjust their expansive songs to better suit the recorded format, trimming tracks to a more easily consumed length. While this certainly honed the band’s songwriting skills, ALO were now eager to let it all hang out, marking tracks like the bombastic “Dead Still Dance” with collage-like structures, deep dance grooves, and inventive, intricate solos. The inclusion of longer songs on Sounds Like This epitomizes “ALO being more comfortable with who ALO is,” according to Lebo.

“The truth is, longer songs come more naturally to us,” he continues. “In the past we’ve spent more time whittling the songs down because we felt that we needed to do so in order to ‘fit in.’ This time around, we let the songs be what they wanted to be, and sometimes that meant a long song.”

“There was a part of us that went,”Are we being a tad too indulgent?,’” says Gill, “but in the end we decided that we wouldn’t say we were being indulgent “we were being generous.”

ALO let their imagination run free, both musically and lyrically, resulting in such larger-than-life highlights as the Old West flight of fancy, “Cowboys and Chorus Girls” or the self-explanatory glitterball workout, “Room For Bloomin.” Where prior albums featured songs penned individually and then arranged by the band, this time out, ALO were determined that their collective spirit inform every groove.

“With collaborative writing, everyone’s personal stamp is in the DNA of the song,” Lebo says. “That makes these songs definitively ALO.”

At the heart of the album is ALO’s raucous reverie for days past, “Blew Out The Walls,” as well as its more subdued sibling, “Sounds Like That” (included exclusively as an iTunes bonus track). The track reverberates with the excitement and passion of a rock n’ roll band in its nascent stage, that magical moment where four friends first get together in someone’s basement for the sheer joy of making music together.

“I think we all were feeling the dream again,” Adams says, “remembering back to where it all started.”

All four members of ALO agree that a similar sense of excitement is currently spurring the band forward. Sounds Like This has imbued ALO with an audacious energy that is certain to infiltrate the band’s already spirited live shows, not to mention their next studio outing.

“Like all ALO albums, the next one will be a culmination of all the past albums and everything that happens in between,” Brogan says, “I don’t know if we’ll be so bold in our lack of planning next time, but I’m sure we’ll find some other way to challenge ourselves.”

“I love making records,” Gill says. “With this one done, now there’s the excitement of, what about the next one? Those juices are already brewing. I feel like we just cracked the ice so it’ll be exciting to see what happens next.”
Posted by Bonnie Kenaz-Mara at 9:00 AM No comments: