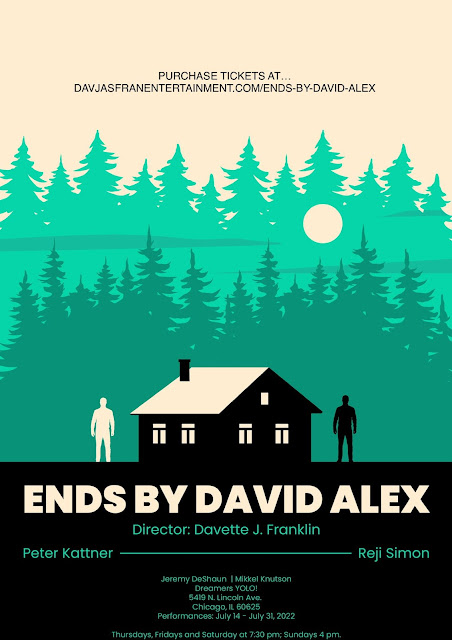 Set in 1967, the play follows a confrontation between two men and the ideas they represent. Kingsley, a thirty-year old African-American man, has lived alone for the past eighteen years in a secured forest cabin. Glober, a bitter recently returned Vietnam veteran, forcibly takes refuge in Kingsley's cabin during a violent storm. The two are placed at odds, as one must decide if he should rejoin society while the other contemplates leaving it. For tickets and more information visit, https://www.davjasfranentertainment.com/ends-by-david-alex

Playwright David Alex is no stranger to the Chicago stage. Apart from being a long-time judge with the Joseph Jefferson Awards, his recent work N enjoyed a run at the Greenhouse Theatre, a reading at DePaul University, and was a Semifinalist for the National Arts Club award. Previous works of his include ADRIFT (Polarity), CORPUS DELICTI (Madkap Productions), and ONTO INFINITY (Winner of the Das Goldkiel First Place Award), among others. ENDS also has its roots in Chicago, having been workshopped at Colombia College Chicago and Victory Gardens Theatre. ENDS received its equity premiere by the New Jersey Repertory Company. 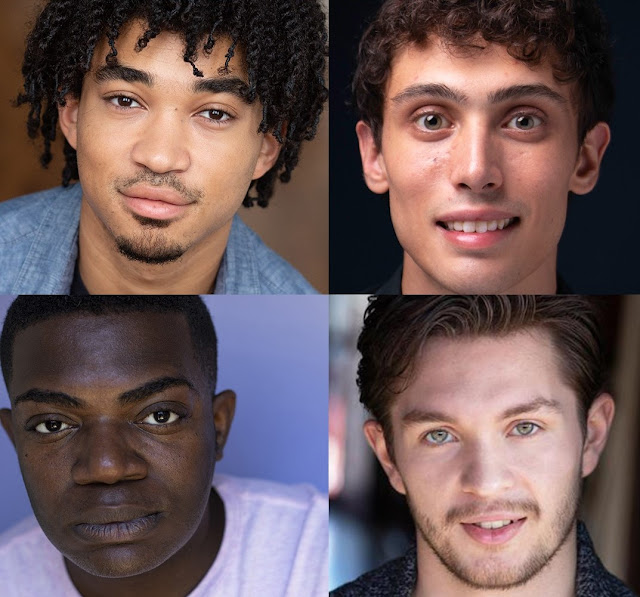 ENDS is a socio-political drama set in 1967 and deals with a confrontation between two men and the ideas they represent. Kingsley, a thirty-year old Black man, has lived isolated for the past eighteen years in a secured forest cabin. Besides his childhood experiences and memories, his view of life is based on his many books. Glober, a recently returned bitter White Vietnam veteran, is forced to take refuge in Kingsley's cabin during a violent storm.

Reji Simon is a Chicago based performing artist and has been a Resident Artist at Filament Theatre since 2017. In addition to performing, he is a teacher, producer, and casting director. At the heart of all of his work is community and development. He is committed to developing artists through community building and the deconstruction of barriers meant to keep folks out of art making. Reji has worked as a teaching artist at Filament Theatre, Illinois Caucus for Adolescent Health, and Cleveland Playhouse.

Mikkel Knutson is a new face to the Chicago theater scene. Graduating from Northern Illinois University during the pandemic, he has also previously worked with Door Shakespeare as an acting/costumes intern and fight captain as well as being recently seen in October with UWW Fest as Mark in BE MINE.

Davette J. Franklin is a Producer, Director, Playwright, Actress and Singer. She has always loved being on stage and entertaining. It all started with her signing with her sisters at the age of 3 years old. In high school, she became passionate about acting and noticed that if you do not have an extensive resume, most agencies and casting directors would not give you a shot. This ignited a spark in her to cater to the "new" actor and DavJasFran Entertainment was born. Her goal is to help new artists get discovered all while having fun and creating great work. She is often called the "Millennial Hero" and "Queen of YOLO", all names in which she loves.

David Alex has received three Awards from the Illinois Arts Council in Recognition in Playwriting, a Grant from the Pilgrim Foundation and has served as the Secretary of the Chicago Alliance for Playwrights and the Illinois Theatre Association. He is a proud member of the Joseph Jefferson Committee, which recognizes excellence in Chicago theatre, as well as the Dramatists Guild. David Alex lives in Chicago.

DavJasFran Entertainment is a Production Company housed at Dreamers YOLO! The company was founded in 2016 by Davette J. Franklin aims to be a production company for the "new" artist. Davette noticed that new Actors/Actresses, Writers, and Directors are always told to build their resume, but are never given the opportunity to grow them...that is why DavJasFran Entertainment was created. It fosters the "new" artists to help build their resumes and give them a fun experience while breaking into the Entertainment business.

For tickets and more information, https://www.davjasfranentertainment.com/ends-by-david-alex 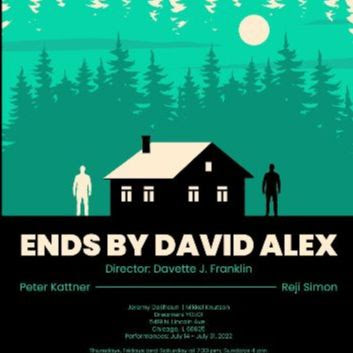 Posted by Bonnie Kenaz-Mara at 7:04 PM No comments: