REVIEW: Hell in a Handbag Productions' World Premiere of SnowGirls – The Musical Through December 30, 2018 at Mary’s Attic

ChiIL Live Shows on our radar: 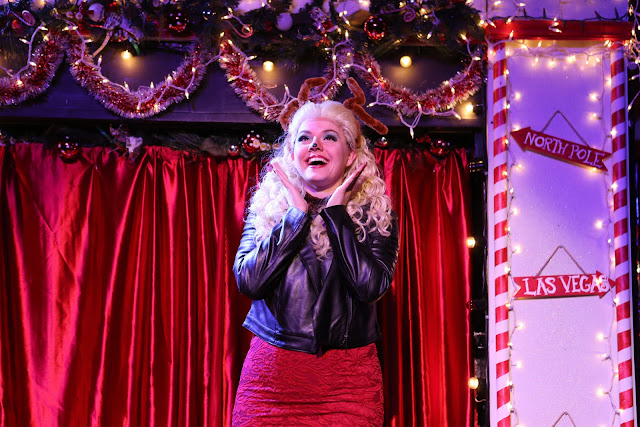 (pictured) Harper Leander in Hell in a Handbag Productions’ world premiere of SnowGirls – The Musical. All Production Photos by Rick Aguilar Studios. 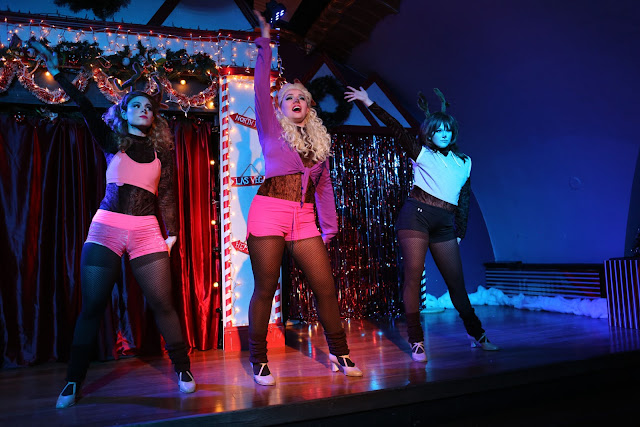 Mary’s Attic, aglow with pink and red lights, serves up hot toddies and other holiday spirits to a laughing and appreciative crowd. 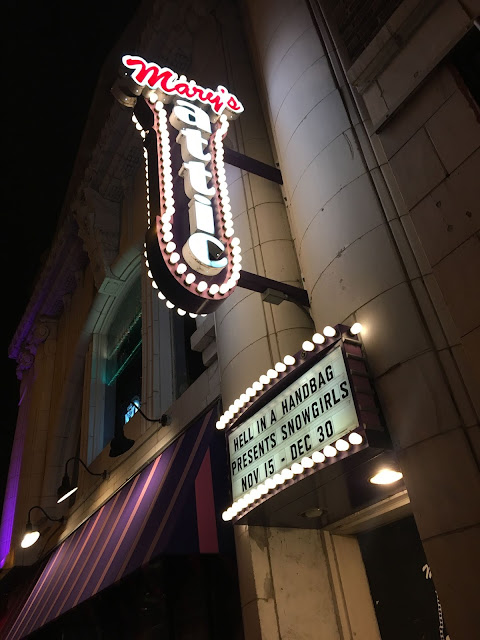 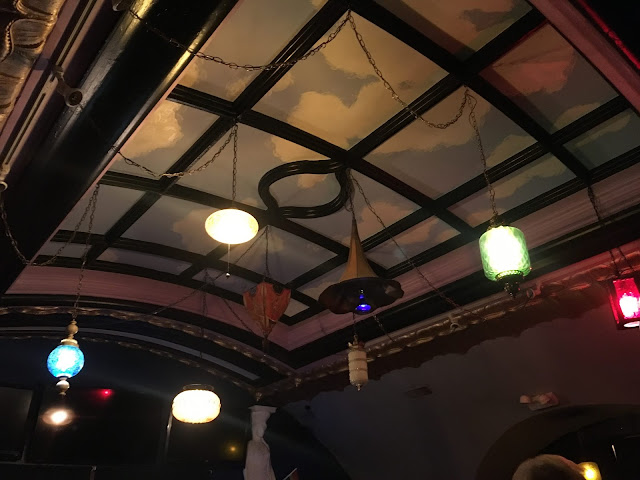 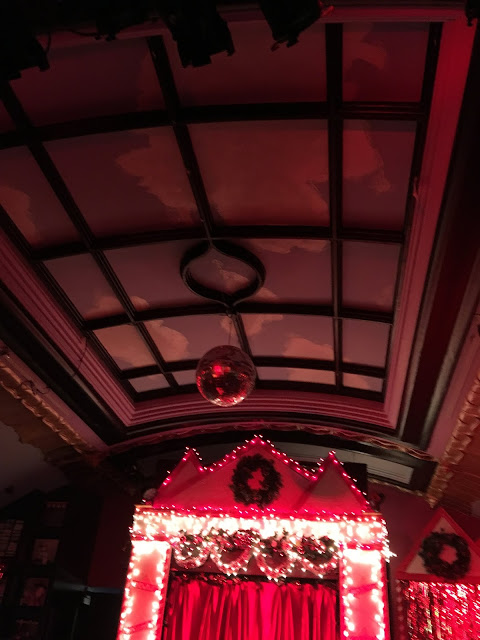 The show opens with an energetic musical number introducing small-town reindeer Snowmi Malone. Snowmi hitchhikes her way to the North Pole to become a dancer, and sexy hilarity ensues!  Snowgirls delivers catchy musical numbers, clever one-liners, and a sexy villainess who wouldn’t be out of place as the wicked queen in a (very twisted) Disney movie. 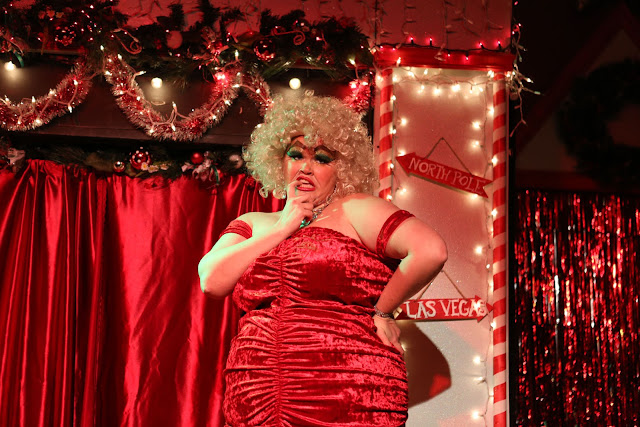 Don’t expect any plot-twists as Snowgirls closely parodies the 1995 movie Showgirls, but do expect full-frontal reindeer nudity, theatre-in-jokes, and a scene-stealing Mrs. Claus. References to “Saved by the Bell:”, Rankin and Bass Christmas specials, and even a bit of puppetry round out this naughty-but-nice addition to the Holiday theatre season. 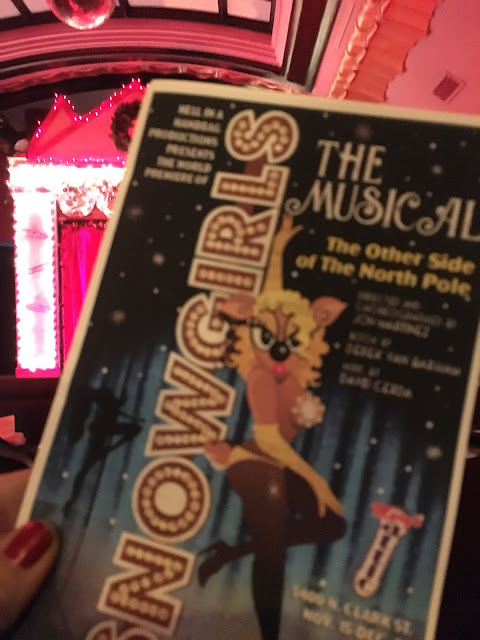 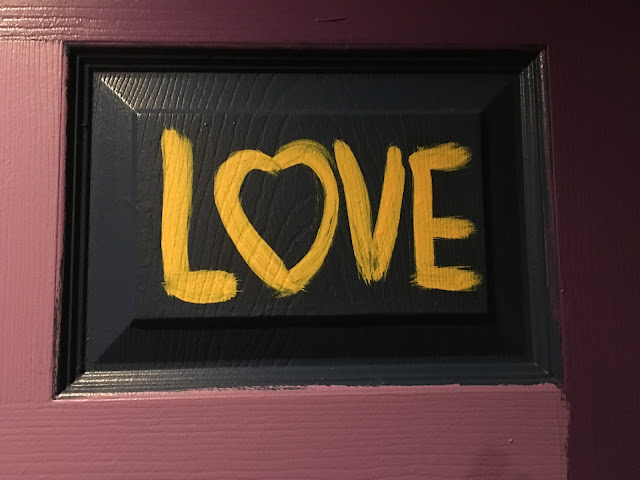 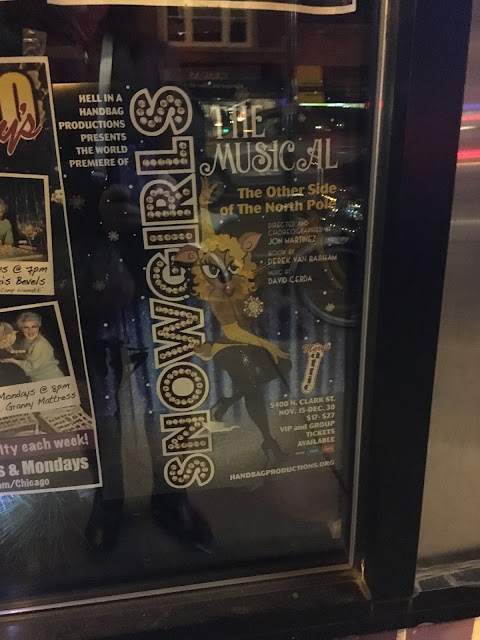 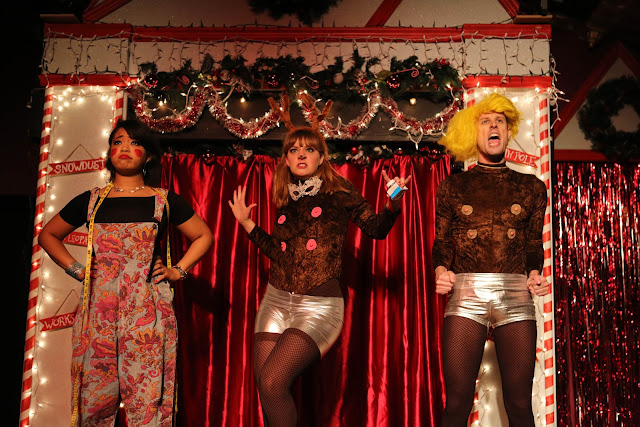 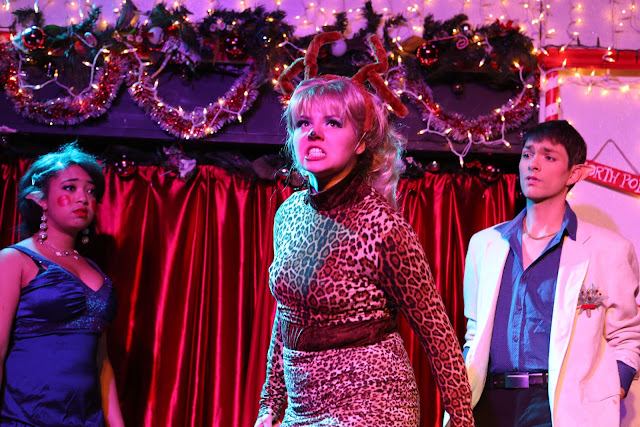 Hell in a Handbag Productions rings in the holidays with the world premiere of SnowGirls – The Musical, a parody of the classic cult film Showgirls. Featuring a book by Derek Van Barham, music by Artistic Director David Cerda* with Scott Lamberty and Jeff Thomson, direction by Jon Martinez and music direction by JD Caudill. SnowGirls will play November 15 – December 30, 2018 at Mary’s Attic, 5400 N. Clark St. in Chicago’s Andersonville neighborhood. Tickets are currently available at brownpapertickets.com or by calling (800) 838-3006. 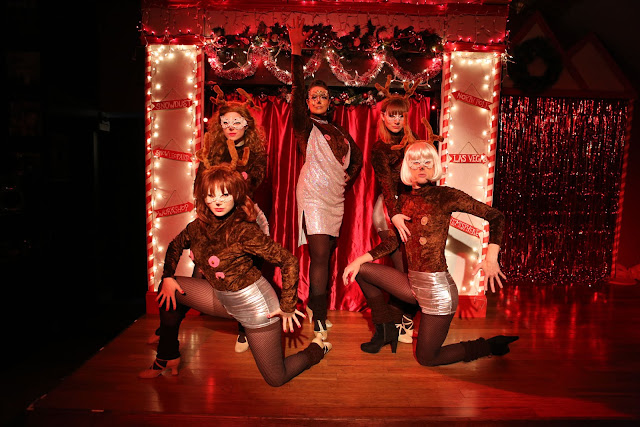 Snowmi Malone is a rebel who dreams of becoming a dancer. Her quest leads her to the cold cruel world of the North Pole, where she’ll stop at nothing to fulfill her fantasy. SnowGirls explores what happens at the North Pole the other 364 days of the year – and it isn't always pretty. 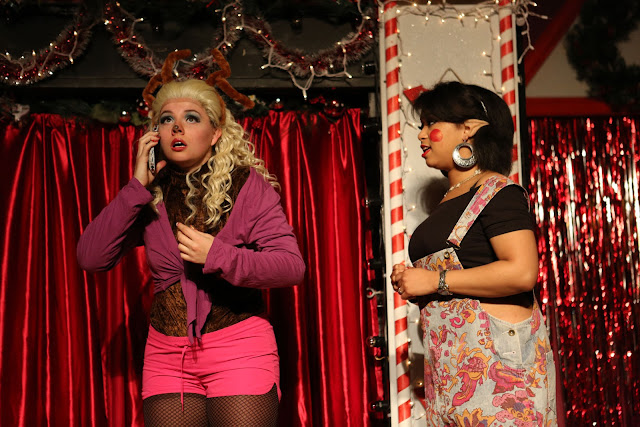 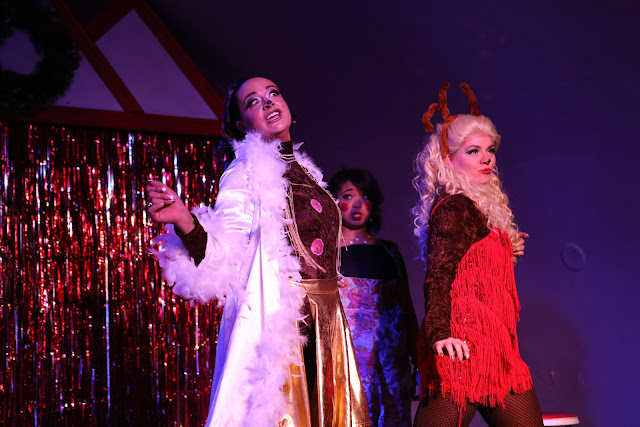 Curtain Times: Thursday, Fridays and Saturdays at 7:30 pm; Sundays at 6 pm. Please note: there will not be a 6 pm performance on Sunday, December 2 due to the Handbag Gala.

Derek Van Barham (Book) is the Associate Artistic Director of Pride Films & Plays and a member of the Red Tape Theatre ensemble. For PFP, he has directed Perfect Arrangement, Angry Fags (Steppenwolf Garage), Songs from an Unmade Bed (Jeff nomination), and (co-directing) PRISCILLA, Queen of the Desert: The Musical. He also wrote BITE: A Pucking Queer Cabaret and Kill Your Boyfriends. Other directing credits include The View Upstairs (Circle Theatre), Three Days of Rain (Boho), Miracle! by Dan Savage, Skooby Don't (Hell in a Handbag), and HOT PINK (New American Folk Theatre). Choreography credits include The CiviliTy of Albert Cashier (Permoveo/PFP), Nevermore, Shockheaded Peter, Coraline (Black Button Eyes) and Salonathon. He was named one of Windy City Times 30 Under 30, recognizing Chicago's LGBTQ+ community. Up next: directing When Adonis Calls and Poseidon! An Upside Down Musical and choreographing Evil Dead the Musical.

David Cerda (Music) is the Artistic Director and co-founder of Hell in a Handbag Productions. Cerda has written or collaborated on POSEIDON! An Upside Down Musical, Caged Dames, Sexy Baby, Lady X: The Musical, Christmas Dearest, Rudolph the Red-Hosed Reindeer, SCARRIE-The Musical, and many others. He has also worked as a songwriter with Amazon Studios and as an actor around Chicago. In 2016, Cerda was in inducted into the Chicago GLBT Hall of Fame and in 2017 he received a Lifetime Achievement Jeff Award for his contributions to the Chicago theater community and philanthropic efforts.

Jeff Thomson (Orchestrations) is a recipient of the Jonathan Larson Performing Arts Foundation Award as well as the Dramatist Guild Musical Theatre Writing Fellowship. Jeff’s original musical Trails was performed in New York, Los Angeles, Seattle and Tokyo, winning him the NYMF award for Best Music, as well as the Stage Entertainment Development Award. Other projects include Virtually Me for TheatreworksUSA, and a club musical adaptation of the cult film Jawbreaker, an arena rock musical adaptation of Allan Moyle's Pump Up the Volume (book and lyrics by Jeremy Desmon). He was commissioned by Broadway Across America to compose the music to the children’s musical Mad Libs Live!, which premiered Off-Broadway. Jeff was selected by Amazon Studios to write the music for the animated movie musical, Midnight with lyricist David Cerda. Most recently, Jeff was selected by Simon & Schuster to pen the score to a new Broadway musical based on the iconic and beloved sleuth, Nancy Drew. www.JeffThomsonMusic.com

Scott Lamberty (Arrangements, Tracks) has collaborated with David Cerda on several Handbag musicals including Rudolph the Red-Hosed Reindeer, POSEIDON! An Upside Down Musical, SCARRIE – The Musical, Sexy Baby and Lady X The Musical. Scott has also worked extensively with Corn Productions on the Tiff and Mom shows, The Bad Seed The Musical and Jesus Camp – The Musical, among many others.

JD Caudill (Music Director) is a Chicago-based director, music director and performer. Since coming to Chicago in 2014, JD has performed onstage with The New Colony, Hell in a Handbag Productions, New American Folk Theatre, Forks and Hope and Hobo Junction, and directed for over 15 companies, including Broken Nose Theatre, The New Colony and Haven Theatre. JD is a company member of Hell in a Handbag and Haven Theatre (where they are also marketing director), and an associate company member of Broken Nose Theatre. 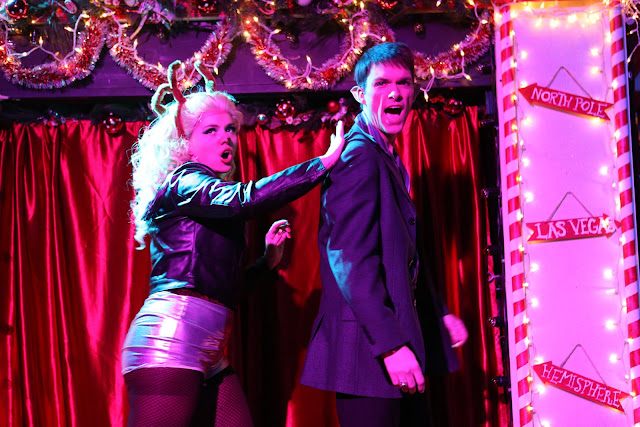 About Hell in a Handbag Productions
Hell in a Handbag is dedicated to the preservation, exploration, and celebration of works ingrained in the realm of popular culture via theatrical productions through parody, music and homage. Handbag is a 501(c)(3) Not for Profit.
Posted by Bonnie Kenaz-Mara at 1:24 PM No comments: