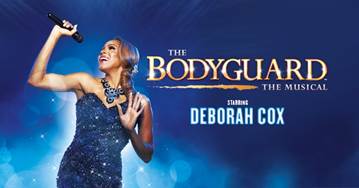 THE BODYGUARD will play the Oriental Theatre (24 W. Randolph) for a limited two-week engagement January 31 through February 12, 2017.

Based on the smash hit film, the award-winning musical will star Grammy® Award-nominee and R&B superstar DEBORAH COX!

Former Secret Service agent turned bodyguard, Frank Farmer, is hired to protect superstar Rachel Marron from an unknown stalker. Each expects to be in charge; what they don’t expect is to fall in love. A breathtakingly romantic thriller, THE BODYGUARD features a host of irresistible classics including Queen of the Night, So Emotional, One Moment in Time, Saving All My Love, Run to You, I Have Nothing, I Wanna Dance with Somebody and one of the biggest selling songs of all time – I Will Always Love You.

Based on Lawrence Kasdan’s Oscar-nominated Warner Bros. film and adapted by Academy Award-winner (Birdman) Alexander Dinelaris, THE BODYGUARD had its world premiere in London’s West End where it was nominated for four Laurence Olivier Awards including Best New Musical and won Best New Musical at the Whatsonstage Awards.

ABOUT BROADWAY IN CHICAGO
Broadway In Chicago was created in July 2000 and over the past 16 years has grown to be one of the largest commercial touring homes in the country.  A Nederlander Presentation, Broadway In Chicago lights up the Chicago Theater District entertaining well up to 1.7 million people annually in five theatres.  Broadway In Chicago presents a full range of entertainment, including musicals and plays, on the stages of five of the finest theatres in Chicago’s Loop including The PrivateBank Theatre, the Oriental Theatre, Cadillac Palace Theatre, the Auditorium Theatre of Roosevelt University and just off the Magnificent Mile, the Broadway Playhouse at Water Tower Place.