Goodman Theatre and the Chicago Latino Theater Alliance (CLATA) presents the Midwest premiere of Pequeños Territorios en Reconstrucción by Teatro Linea de Sombra of Mexico City, appearing in a limited engagement September 21-25 at the Goodman. The production is produced as part of Destinos—the 5th Chicago International Latino Theater Festival, a five-week festival of Latino theater artists and companies from Chicago, the U.S. and Latin America in shows, panels and student performances at venues citywide. Pequeños Territorios en Reconstrucción appears September 21 – September 25 in the 350-seat flexible Owen Theatre. Tickets ($10 –$25, subject to change) are now available at GoodmanTheatre.org/Pequenos or by phone at 312-443-3800. 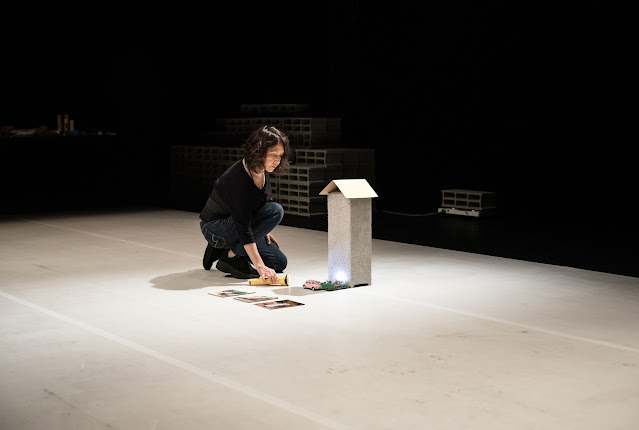 The Chicago Latino Theater Alliance (CLATA), a transformative cultural engine helping drive the city’s local Latino theater community to a more prominent level, was founded by Myrna Salazar and the National Museum of Mexican Art (NMMA), the International Latino Cultural Center (ILCC) and the Puerto Rican Arts Alliance (PRAA). Chicagoans are still stunned by the recent loss of Ms. Salazar, who passed away suddenly on August 3. “CLATA’s success would not have been possible without a visionary at the helm, a person with the tenacity and passion to bring Chicago’s Latino theater community to a level that had not yet been imagined. Now, in Myrna’s honor, CLATA is charged with the task of making sure her legacy forges ahead with the same unbridled zeal that she brought to her beloved organization, the Destinos Festival, and her everyday life,” wrote the CLATA staff in a program note dedicating this year’s Destinos to her memory.

Pequeños Territorios en Reconstrucción is among the six world premieres, four U.S. premieres and three Midwest premieres featured at 2022 Destinos. The complete festival line-up, with performances presented at marquee venues downtown, neighborhood storefront theaters and cultural institutions throughout Chicago, is now available at DestinosFest.org. Directed by Jorge A. Vargas, the Midwest premiere features Sonya Madrigal, Shanttal Saad, Abril Pinedo and Alicia Laguna in a story about the “City of Women” in Turbaco, Colombias where 15 years ago, a group of women displaced by armed conflict created the “League of Displaced Women” and built 98 houses with their own hands. After a short stay there, Teatro Linea de Sombra created a documentary fable posing a series of ethical questions on the potential destiny of the settlement, of the women who built it and especially of the children who inhabit it. 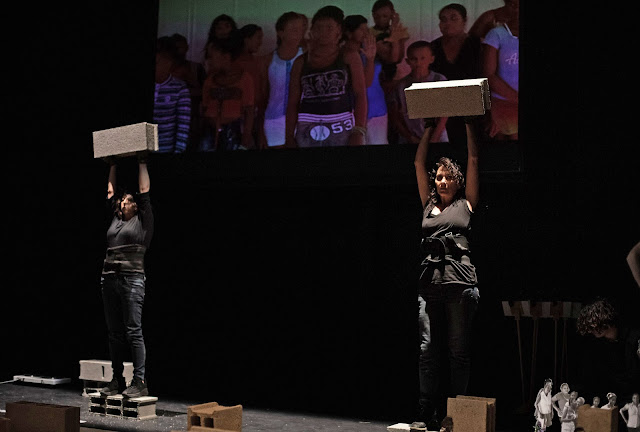 Jorge A. Vargas (Director) has been the artistic director of Teatro Línea de Sombra (Shadow Line Theatre) since its inception in 1993.  In the mid 1980s he studied at École de Mime Corporel Dramatique of Ettiene Decroux in Paris, which led to his first work, Galería de Moribundos (Gallery of Dying Men), and established Vargas in physical and visual theater in México City.  He subsequently trained with the International Theatre School for Latin America and the Caribbean in Havana, Cuba (1990) and Tlaxcala, Mexico (1994.) Until 2010, he alternated between devising experimental theater and directing plays written by authors such as Roland Schimmelpfenning, Jon Fosse, Anthony Neilson, Neil LaButte and Lars Norén. The Association of Theater Writers and Critics (UCCCT) twice recognized Vargas and Teatro Línea de Sombra (TLS) with Best Theatre Group in the Provinces (1982, 1991), and Vargas with two awards for Best Research Theatre Director (2001, 2005). Their work tours throughout Mexico and has toured to major festivals and theaters in France, Argentina, the U.S., Canada, Colombia, Peru, Brazil, Spain, Finland, Russia, Korea, Slovenia and Macedonia. Amarillo, the hallmark work by Vargas with TLS, received the Latin ACE Award for the Best Foreign Production in New York, in 2012 and the Audience Award for the Best Performance of the 21st Exponto International Performing Arts Festival in Ljubljana, Slovenia. The Universal Forum of Cultures Monterrey commissioned Vargas to create and direct The Forge of the World, a large-scale performance piece inside Oven 3 of Fundidora Park in Monterrey. More than a million spectators attended its 80 performances. Their most recent international co-production, which Vargas also co-directed, is Artículo 13 (Article 13) with Cie Carabosse in France, an immersive installation regarding migratory movements around the world.  Last pieces of the company are – Baños Roma (2013); Pequeños Territorios en Reconstrucción (2014); Durango66; El Puro Lugar,  a Site Specific piece in Jalapa Veracruz and Theatre Version ( 2016-2017); Filo de Caballo(s) (2018), a commission of the Contermporary Arts Museum in Chicago that opened in fall 2018 at Teatro El Galeón; Danzantes del Alba, a co-production of Internation Cervantino Festival Teatro UNAM and TLS (2020-2021). Their most recent project is Zona Clausurada, a scenic installation presented at Museo Universitario del Chopo, UNAM.

Sonya Madrigal (Narrator) is thrilled to be making her Goodman Theatre acting debut. Previously Sonya choreographed and was a movement consultant on the Goodmans productions of Zulema and American Mariachi. Sonya is a proud first-generation Mexican-American from Chicago IL, where she received her BFA in Acting from the University of Illinois at Chicago. She is currently an MFA acting candidate at the University of Iowa. Favorite Chicago credits include Day of Absence (Congo Square); Hope Part II; A Mexican Trilogy (Teatro Vista); Oedipus Rex and the premiere of David Auburn's The Adventures of Augie March (Court Theater). Recent credits include Henry V (Riverside Theater); Letters From Cuba and Our Lady of 121st. Sonya is proudly represented by Stewart Talent.

Shanttal Saad is a Mexican-American actress, singer and songwriter with over 10 years of experience in working with performing arts with a focus on vocal proficiency and experimental music. With studies in drama, she has performed for theatrical productions in the U.S., Mexico and Europe as an actress and as a live musician working with international theater companies such as Teatro Línea de Sombra. She has created original soundtracks for theater, movies and radio. Shanttal is also known as Frida Canti in a project where she transforms into the lead performer of her own compositions and explores Latin genres, rock and folk music.

Abril Pinedo was born in Ciudad Juárez Chihuahua in 198 and graduated from the University Theater Center, UNAM in 2010. With more than 20 years of artistic experience, she has performed in almost all areas of the performing arts. As an actress, she has participated in more than thirty productions, including Desert under lunar scenery by Alberto Villarreal; Words of love in German by Gilberto Guerrero; Bullet music by Hugo Salcedo under the direction of Alfonso Cárcamo; Nothing Always Everything Never with Colectivo Macramé directed by Mariana Gándara and Tales of Boca en Boca with Vereda Teatro, directed by Sofía Sanz. She has collaborated on numerous occasions with T3Y Teatro as director of Tania Mayrén's text, Hedda. She is the artistic director of the Colectivo La Maqueta with whom she has directed two productions, Radiocuento, music noise and sound (2016) and What can be invented, not all stories are for children (2016). She is currently working on her new project La Casa.

Alicia Laguna has trained at the Universidad de Nuevo León in Monterrey, Mexico. She has been the artistic co-director of Teatro Línea de Sombra (TLS) since 1993 and a company actress and a creator of plays addressing the context of Mexico’s socio-political reality for over ten years. She has toured with TLS in Europe, South America, Canada, USA, Korea, China and Russia. As an actress she has participated in movies such as Norteado, directed by Rigoberto Perezcano and has won the prize for best actress at the Abu Dabhi Film Festival. She was, along with film director Maria Berns, a co-creator of the experimental film So Long.

Please note: Masks are currently recommended, but not required, while in the theater. Policies may change based on prevailing medical guidance. Learn more about Goodman’s current Health and Safety Protocols at GoodmanTheatre.org/Protocols.

Chicago’s theater since 1925, Goodman Theatre is a not-for-profit arts and community organization in the heart of the Loop, distinguished by the excellence and scope of its artistic programming and community engagement. The theater’s artistic priorities include new play development (more than 150 world or American premieres), large scale musical theater works and reimagined classics. Artists and productions have earner two Pulitzer Prizes, 22 Tony Awards and more than 160 Jeff Awards, among other accolades. The Goodman is the first theater in the world to produce all 10 plays in August Wilson’s “American Century Cycle.” Its longtime annual holiday tradition A Christmas Carol, now in its fifth decade, has created a new generation of theatergoers in Chicago. The Goodman also frequently serves as a production and program partner with national and international companies and Chicago’s Off-Loop theaters.

Using the tools of the theatrical profession, the Goodman’s Education and Engagement programs aim to develop generations of citizens who understand the cultures and stories of diverse voices. The Goodman’s Alice Rapoport Center for Education and Engagement is the home of these programs, which are offered free of charge for Chicago youth—85% of whom come from underserved communities—schools and life-long learners.

Goodman Theatre was founded by William O. Goodman and his family in honor of their son Kenneth, an important figure in Chicago’s cultural renaissance in the early 1900s. The Goodman family’s legacy lives on through the continued work and dedication of Kenneth’s family, including Albert Ivar Goodman, who with his late mother, Edith-Marie Appleton, contributed the necessary funds for the creation on the new Goodman center in 2000.

CLATA, which produces Destinos, was founded in 2016 as a non-profit 501(c)(3) organization by Myrna Salazar and Chicago’s three most prominent Latino arts organizations: the National Museum of Mexican Art (NMMA), the International Latino Cultural Center (ILCC), and the Puerto Rican Arts Alliance (PRAA).

“In Spanish, the word ‘destinos’ has multiple meanings: destinies, destinations or fate,” explained CLATA’s late Executive Director Myrna Salazar, who passed away suddenly this past August, and to whom the 2022 festival is dedicated. “Destinos showcases Latino theater artists from Chicago, across the U.S. and Latin America to present engaging and thought-provoking stories that transcend boundaries, amplify Latino voices, and diversify Chicago stages to encourage cross-cultural conversation.”

The organization’s goal is to create the country’s leading international Latino theater festival with an emphasis on showcasing Chicago Latino theater artists and companies. Additionally, CLATA provides local groups ongoing organizational, marketing and financial support, and works diligently to create a permanent home for Chicago’s Latino theater artists. Ultimately, CLATA strives to underscore Chicago’s reputation as one of the most exciting and culturally diverse theater cities in the world.

Posted by Bonnie Kenaz-Mara at 12:15 PM No comments: