Tickets are extremely low, so check ahead if you slacked off and didn't get yours yet.  ChiIL Live Shows will be there shooting stills and we'll be bringing you a video interview with lead singer, Chrigel along with our show shots. 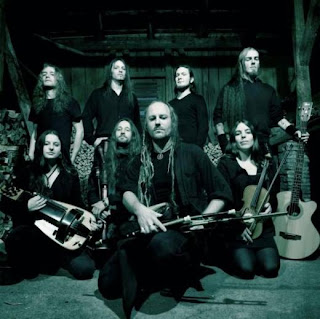 We dig a good metal mash up....metal with strings and traditional folk instruments or a sax playing frontman like Chicago's own Yakuza.    So we can not wait to hear Eluveitie LIVE.

Eluveitie – New Wave Of Folk Metal …
While Eluveitie always belonged to the fastly growing European folk metal scene, they always brought some fresh wind into it: Eluveities sound is authentic, traditional Celtic folk music combined in a unique way with modern styled melodic death metal. With their new Album “Everything Remains (as it never was)” they have managed to deepen every aspect of their already inimitable style and maybe more than ever can only be described by their own description “The New Wave Of Folk Metal”.
Originally formed by mastermind Chrigel Glanzmann in Winter 2002/2003 as a mere studio project, the first MCD “Vên” was recorded in spring 2003 – already unique in it’s way of having folkmusic on an equal footing with the metal sound. . The self-financed MCD was ardently received by scene and press and sold out within a few months. In 2004 Eluveitie signed to the Dutch label Fear Dark Records, which released a re-mastered (and partly re-recorded) version of “Vên”, and continued as a “real” band, playing gigs together with bands such as Finntroll, Amon Amarth, Korpiklaani, Ensiferum and many others while touring Europe and playing many festivals & openairs.
Although some line-up changes still had to happen, Eluveitie grew into being a band and developed their very own style. In late 2005 Eluveitie was finally ready to enter the studio again and record their first full-lenght album “Spirit”, which was again released through Fear Dark Records. Furthermore a videoclip for the Song “Of Fire, Wind & Wisdom” was produced in Summer 2006, directed by Martin Schäppi, Merlin Sutter & Chrigel Glanzmann / Eluveitie. With “Spirit” Eluveitie went a big step forward, presenting a completely new style of Folk Metal to the scene – starting a new wave of Folk Metal! While the album was turning out to be a huge success, the band toured their asses off again.
Yet whilst touring and playing many festivals like the Graspop Metal Meeting (Belgium) or Summerbreeze Open Air (Germany), Eluveitie already began to work on new material for the succesive album. Finally in Fall 2007 the new album “Slania” was recorded in different studios in Sweden, Switzerland & Liechtenstein, produced, mixed & mastered by Jens Bogren (Amon Amarth, Opeth & more) at the Fascination Street Studios in Orebrö/SE (www.fascinationstreet.se). Having recorded nothing less than the perfection of their very own style, Eluveitie now was in the lucky Situation to receive many offers from almost every known label in metal music & ended up signing with the well-known German record company Nuclear Blast Records, where a new home was found under perfect conditions….
After some talks & the production of a new videoclip (again produced & directed by Merlin Sutter & Martin Schäppi) a release date was set for february 2008. “Slania” turned out to become a breakthrough (chart entries in Switzerland: #35 and Germany: #72) and the band was getting busy taking over the world in 2008 – with appearances at most of the bigger european summer festivals as well as two USA/Canada tours and three European tours within only 12 (!) months.
But never being lazy, Eluveitie worked out new material while touring and was ready to enter the studio again in December 2008! Their follow-up album to “Slania” should become something special – for it is the bands first purely acoustic album (and part I of a two-pieced acoustic concept). “Evocation I – the arcane dominion” was released in April 2009 and turned out to become a real gem of folkmusic and again became a huge success (#20 in the swiss album charts). More tours all over Europe & North America followed as well as their first show in Russia.
Now, after three full length albums and over 250 shows in over 30 countries, Eluvetie is ready to conquer the rest of the world & unleash their latest Masterpiece: When the first ten years of the new millenium have passed, Chrigel and his gang will present the perfect ELUVEITIE album. It has everything their fans and not-yet-fans are asking for: fascinating ancient melodies and stories, bonebreaking, heavy but still danceable death metal and huge choruses that will appeal to all kind of metalheads. „
"Everything Remains“ simply continues where "Slania“ left off taking the bands fresh and unique sound to the next higher level. And this album of course demanded the best treatment there is, so the band hired an army of legends to put the finishing touches to this masterpiece of folk metal: Tommy Vetterli (Kreator, Coroner, a.o.) to engineer and co-produce the album, Colin Richardson (Slipknot, Machine Head, Behemoth, Trivium, a.o.) to mix it and John Davis (U2, Led Zeppelin, Kaiser Chiefs, Arctic Monkeys, a.o.) for mastering duties. …and the new wave of folk metal goes on…
The last time Eluveitie came through Chi-Town and played Bottom Lounge, we shot their openers, Revocation (another of our favs), but had another show to shoot and had to split out and miss Eluveitie.   I made sure that wouldn't happen again!

Check out more of our Revocation shots LIVE at Ultra Lounge here
Check back with ChiIL Live Shows like we vote in Chi, IL...early and often, for LIVE Eluveitie show shots and our video interview with Chrigel.
Posted by Bonnie Kenaz-Mara at 4:43 PM No comments: