THEATRE AT THE CENTER'S DAMES AT SEA Now Playing Munster Indiana Through June 2, 2019 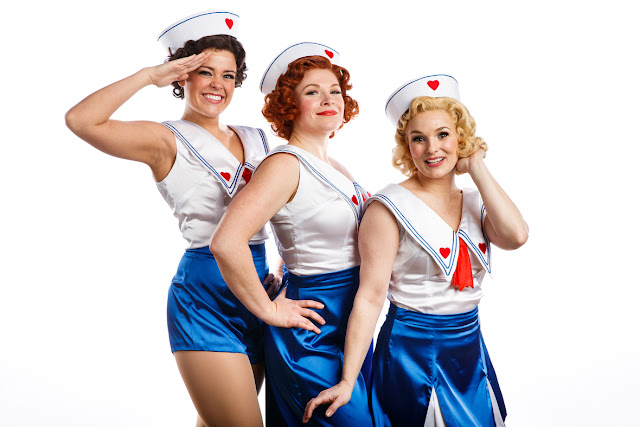 Director and Artistic Director Linda Fortunato has cast Kelly Felthous as Ruby, Todd Aulwurm as Dick, Colette Todd as Mona Kent, Sierra Schnack as Joan, Sam Shankman as Lucky, and Steven Strafford as Hennesey and The Captain in Dames at Sea, the Spring musical production at Theatre at the Center in Munster.

Dames at Sea, the long-running Off-Broadway hit that brought stardom to Bernadette Peters in 1969, opened on Broadway in 2015 to another round of rave reviews. This fun, campy show, based on the nostalgia of Hollywood musicals of the 1930s, is in the spotlight on Theatre at the Center’s main stage for the first time in the theater’s three-decade history.

“Dames at Sea is a delightful musical escape into a bygone era,” Fortunato said. “It’s entertainment for the whole family.”

Dames at Sea, with a book and lyrics by George Haimsohn and Robin Miller and music by Jim Wise, begins with Ruby, getting off the bus from Utah, after arriving in New York City with a dream to make it big on Broadway. The hopeful lass is hired to dance in the chorus off a new Broadway show and meets Dick, a sailor, who also has ambitions as a songwriter. On Opening Night, when they learn that their theater is being demolished, Ruby and the cast, with the help of Dick and some adoring sailors, make plans to perform the show on a naval battleship.

Kelly Felthous (Ruby) makes her TATC debut after a run of Seussical at Marriott Theatre. Other credits include roles as Roxie Hart in Chicago and Audrey in Little Shop of Horrors at Drury Lane. She also played Sally Bowles in Paramount Theater’s Cabaret and Glinda in the National Tour of Wicked.

Todd Aulwurm (Dick), who is making his TATC debut, is a native of Northwest Indiana and a graduate of Crown Point High School and Indiana University. His recent credits include roles in TRU and The Butcher’s Son at the Chicago Musical Theatre Festival. He appeared in Mama Mia, Thoroughly Modern Millie, Smokey Joe’s Café, and Beauty and the Beast at Little Theatre on the Square. At the Rocky Mountain Repertory Theater he performed in The Little Mermaid, Rock of Ages, Titanic, All Shook Up, The Addams Family and 42nd Street.

Colette Todd (Mona Kent) is returning to TATC where she previously performed as Gwen in The Odd Couple, The Lady of the Lake in Spamalot and Sandra in Big Fish. Other roles at TATC include Women on the Verge of a Nervous Breakdown and The Beverly Hillbillies. At Light Opera Works she appeared as Aldonza in Man of La Mancha, Annie Oakley in Annie Get Your Gun and Nancy in Oliver!

Sierra Schnack (Joan) will also make her TATC debut. Recent roles include Ali in Mama Mia and Anytime Annie in 42nd Street at Drury Lane Oakbrook. She also played Kate in Shrew’d at First Folio Theatre and was part of the Ensemble in Legally Blonde at Paramount Theatre.

Steven Strafford (Hennesey and Captain) is making his TATC debut. He has been seen as the demented dentist in Little Shop of Horrors at Drury Lane Theatre and Hortensio in Shrew’d at First Folio. He has also been seen as Chick Clark in Wonderful Town at The Goodman Theatre and as Jesus and Stephen Hawking in End Days. He has toured nationally and internationally as Prince Herbert in Spamalot.

Director Linda Fortunato is in her fourth season as TATC Artistic Director. Her recent credits include directing and choreographing various productions, including Miracle on 34th Street: The Musical, Ghost: The Musical, Steel Magnolias, Big River, The Tin Woman, Cabaret, Annie Warbucks and A Christmas Story as well as choreographing Spamalot, Big Fish, A Christmas Carol: The Musical, Guys and Dolls, Crazy for You and Fiddler on the Roof. She has been nominated for five Joseph Jefferson Awards for her work as a choreographer and director and received both the Equity and Non-Equity Jeff Award for Outstanding Choreography in the 2013-2014 season, garnering Theatre at the Center’s first award for her choreography of 42nd Street.

Founded in 1991, the 410-seat TATC is a year round professional theater at its home: The Center for Visual and Performing Arts, 1040 Ridge Road in Munster, Indiana. TATC is an accessible venue with plenty of free parking and is located off I-80/94, just 35 minutes from downtown Chicago.

Email ThisBlogThis!Share to TwitterShare to FacebookShare to Pinterest
Labels: Munster IN, shows on our radar, TATC, Theatre at the Center, THEATRE AT THE CENTER'S DAMES AT SEA
Older Posts Home
Subscribe to: Posts (Atom)