OPENING: Discord at Northlight May 6 - June 12

Northlight Theatre concludes its 2015-16 season with
The Gospel According to Thomas Jefferson, Charles Dickens and Count Leo Tolstoy: Discord
By Scott Carter

Here at ChiIL Mama and ChiIL Live Shows, we can't wait to catch Discord. Kimberly Senior is one of our absolute favorite directors and this debate looks like a dozy!

**Kimberly Senior previously directed 4000 Miles and The Whipping Man at Northlight.  She directed the Pulitzer Prize-winning and Tony Award-nominated play Disgraced on Broadway and in several theaters across the country.**


What do a Founding Father, a Victorian novelist and a Russian revolutionary have in common? Not much, but each of these notoriously great minds was once brazen enough to pen his own Gospel. Brought together, they debate the meaning of life and the nature of God in a whip-smart comedy that illuminates the brilliance, flaws and humor of three unforgettable philosophers.

**Playwright Scott Carter is the Executive Producer/Writer of Real Time with Bill Maher since its debut on HBO in 2003. Carter has been an Emmy co-nominee for Real Time with Bill Maher every year since 2005 for both Writing in a Variety/Talk show and Outstanding Variety/Talk show. He has also received eight Emmy nominations for his writing and producing work on Bill Maher’s Politically Incorrect from 1993 to 1997.**

Northlight is continuing its popular special event series in conjunction with each production.  All events are free, unless otherwise noted:

Backstage with BJ is a mid-day discussion with Artistic Director BJ Jones, featuring special guest artists, actors, directors and designers, offering behind-the-scenes insight into each production while it is still in rehearsal.  Backstage with BJ for Butler will be held on April 29 at 12:00pm and will last approximately one hour.  Reservations are required, 847.679.9501 x3555 or specialevents@northlight.org.

An Artist Q&A will be held on Monday, May 23 at 3:00pm at the Wilmette Public Library. Northlight artistic staff will facilitate a discussion with members of the cast, who will also present scenes from the play.

An Open Captioning performance is scheduled for Saturday, May 28 at 2:30pm. 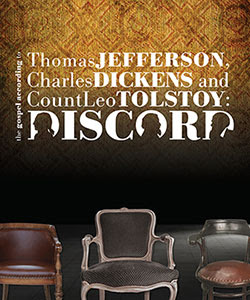 “Did you know that Thomas Jefferson, Count Leo Tolstoy and Charles Dickens all had their own versions of the New Testament? Imagine tossing those egos into a Limbo to debate their world views and to grapple in an intellectual cat fight. Carter has done just that in this fascinating and imagined depiction of three of history's gigantic intellects and their little known exercises of retelling the Bible,” comments BJ Jones. “Scott Carter, best known as a writer/producer of HBO's Real Time with Bill Maher, applies his intensive research to these towering personalities, and through their work has crafted a hilarious debate ranging from faith to political beliefs and sprinkled with artistic observations and petty jealousies. We are thrilled to have Scott's work with us this season, and as directed by Northlight veteran Kimberly Senior, this sharply told tale is both insightful and entertaining.”

Northlight’s production of The Gospel According to Thomas Jefferson, Charles Dickens and Count Leo Tolstoy: Discord is supported in part by Cramer-Krasselt, Coldwell Banker Evanston, Michael and Joan Callahan and Carol and Steve Mullins.

**Cast members Mark Montgomery (Outside Mullingar) and Jeff Parker (Mothers and Sons) are returning to the Northlight stage.  Nathan Hosner is making his Northlight debut.**

SCOTT CARTER (Playwright) is Executive Producer/Writer for Real Time with Bill Maher on HBO. He produced the first 1,100 episodes of Politically Incorrect with Bill Maher, from its 1993 Comedy Central debut to its 1997 move to ABC. While at “P.I.,” producer/writer Carter won eight Emmy nominations and three consecutive CableAce Awards for Best Talk Series. In 1997 Variety named him one of “50 Creatives to Watch.” In 2007, he won the Producers’ Guild of America’s Johnny Carson Award for Real Time. In addition to his two full-length monologues Heavy Breathing and Suspension Bridge, Carter’s full-length play, The Gospel According To... Discord had an extremely successful 2014 and was produced at both the NoHo Arts Center and the Geffen Playhouse in Los Angeles.

MARK MONTGOMERY (Tolstoy) returns to Northlight where he appeared in Outside Mullingar and Experiment with an Air Pump. Other Chicago credits: 2666, Rapture, Blister, Burn, Camino Real and Stage Kiss (Goodman); Hedda Gabler and The Letters (Writers); Agamemnon, Iphigenia in Aulis and M. Butterfly (Court); Twelfth Night, Troilus and Cressida, Rose Rage, Henry VI Parts 1, 2 and 3 and As You Like It (Chicago Shakespeare); In the Next Room, or the vibrator play (Victory Gardens); The Wheel, The Time of Your Life and Want (Steppenwolf); In the Belly of the Beast: Letters from Prison (Journeymen, After Dark Award) and productions at Remy Bumppo, among others. New York credits: The Seagull and Mamma Mia! (Broadway), Our Town (Barrow Street), Macbeth (Public), The Runner Stumbles (Actors Company) and The Madras House (Mint). Regional credits: Julius Caesar (American Repertory) as well as the show's French tour. Television: Law & Order and Chicago Fire.

JEFF PARKER (Dickens) returns to Northlight where he most recently appeared in Mothers and Sons. Recent Chicago credits: Objects in the Mirror (Goodman), The Secret Garden (Court), Samsara (Victory Gardens) and Isaac's Eye (Writers). Other Chicago credits include: Camino Real, Candide, Turn of the Century and Bounce (Goodman); The Brother/Sister Plays (Jeff Award - Best Ensemble) and Venus (Steppenwolf); Cymbeline, As You Like It and The Three Musketeers (Chicago Shakespeare); Sweet Charity and Days Like Today (Writers); and Nine (Jeff Nomination - Best Actor in a Musical, Porchlight). Off-Broadway and regional credits: Candide (Huntington), My Fair Lady (Asolo Repertory), 1776 (A.C.T.), Boy Gets Girl (Manhattan Theatre Club), The American in Me (Magic) and Winesburg, Ohio (Kansas City Repertory). Television and film credits: Chicago P.D., Love is a Four Letter Word, Prison Break and Early Edition. Jeff holds a B.F.A. in Acting from the University of Southern California.

Now entering its 41st season, the organization has mounted over 200 productions, including more than 40 world premieres.  Northlight has earned 194 Joseph Jefferson Award nominations and 32 Awards.  As one of the area’s premier theatre companies, Northlight is a regional magnet for critical and professional acclaim, as well as talent of the highest quality.