Here at ChiIL Live Shows we can't wait to catch opening night on Sunday. Check back early and often for our show reviews, news, interviews and more.

Bailiwick Chicago is pleased to launch its 2013-14 season with the Chicago premiere of the thrilling musical drama DESSA ROSE by Lynn Ahrens and Stephen Flaherty, the Tony Award-winning team behind Ragtime, Once on This Island and Seussical!, directed by Artistic Director Lili-Anne Brown with music direction by Collective Member James Morehead.  DESSA ROSE plays March 6 – April 5, 2014 at the Victory Gardens Richard Christiansen Theater, 2433 N. Lincoln Ave. in Chicago. Tickets are available at www.victorygardens.org, by calling (773) 871-3000 or in-person at the Victory Gardens Box Office. The press performance is Sunday, March 9 at 7 pm.

DESSA ROSE is a stirring musical drama based on the noted novel by Sherley Anne Williams. Told as an oral history and related by two women, Ruth and Dessa Rose, this powerful tale of an unlikely friendship takes place in 1847, 14 years before the outbreak of the American Civil War.

Based on both fact and fiction, the musical weaves together the stories of two legendary women, one white and one black, who struggled for different kinds of freedom in an era defined by men. Ruth Sutton is a white woman abandoned by her husband and living on an isolated farm. Dessa Rose is an escaped slave on the run from a bloody slave rebellion, with a newborn infant to protect, who seeks refuge with Ruth. Hidden in this Alabama backwater, the two women's uneasy alliance ultimately transcends any racial barriers as they find the strength to confront the world on their own terms. Their dangerous journey to freedom and self-realization makes for a musical that is by turns comic, tragic, uplifting and inspiring. 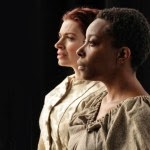 Lili-Anne Brown (Director) is the Artistic Director of Bailiwick Chicago. Last season, she directed See What I Wanna See as part of Steppenwolf Theatre's Garage Rep. In 2012, she received a Jeff Award nomination and was awarded a BTA Award (Best Direction of a Musical) for her direction of the Midwest premiere of Passing Strange. Other directing credits include Unnecessary Farce, Cabaret, Sweet Charity, 25th Annual Putnam County Spelling Bee and Buddy: The Buddy Holly Story (Timber Lake Playhouse). Onstage, she most recently appeared in The Second City's Guide to the Opera at Lyric Opera, the Off-Broadway premiere of A Twist of Water, and as Joanne in Rent, directed by David Cromer at ATC. She has also performed at Steppenwolf Theatre, Chicago Shakespeare Theater, Victory Gardens, Writers' Theatre, Ravinia Festival, and many other Chicago venues and regional theaters.

Bailiwick Chicago is a non-profit professional company with a mission to produce contemporary musicals and plays, reinvent classic musicals and develop new work, while sharing a powerful and authentic theatrical experience. The company celebrates and engages our community through diverse programming, artistic partnerships and outreach opportunities. In its first three seasons Bailiwick Chicago has garnered 54 award nominations, including 10 Non-Equity Jeff Award Nominations in its first Jeff-Eligible season (2011-12).  For additional information, visit bailiwickchicago.com.